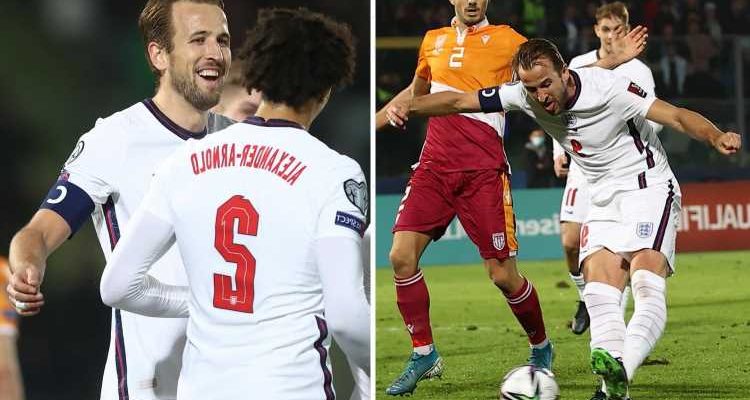 THE FA will need a new library at Wembley soon.

Just to keep all Harry Kane’s England records in one place. 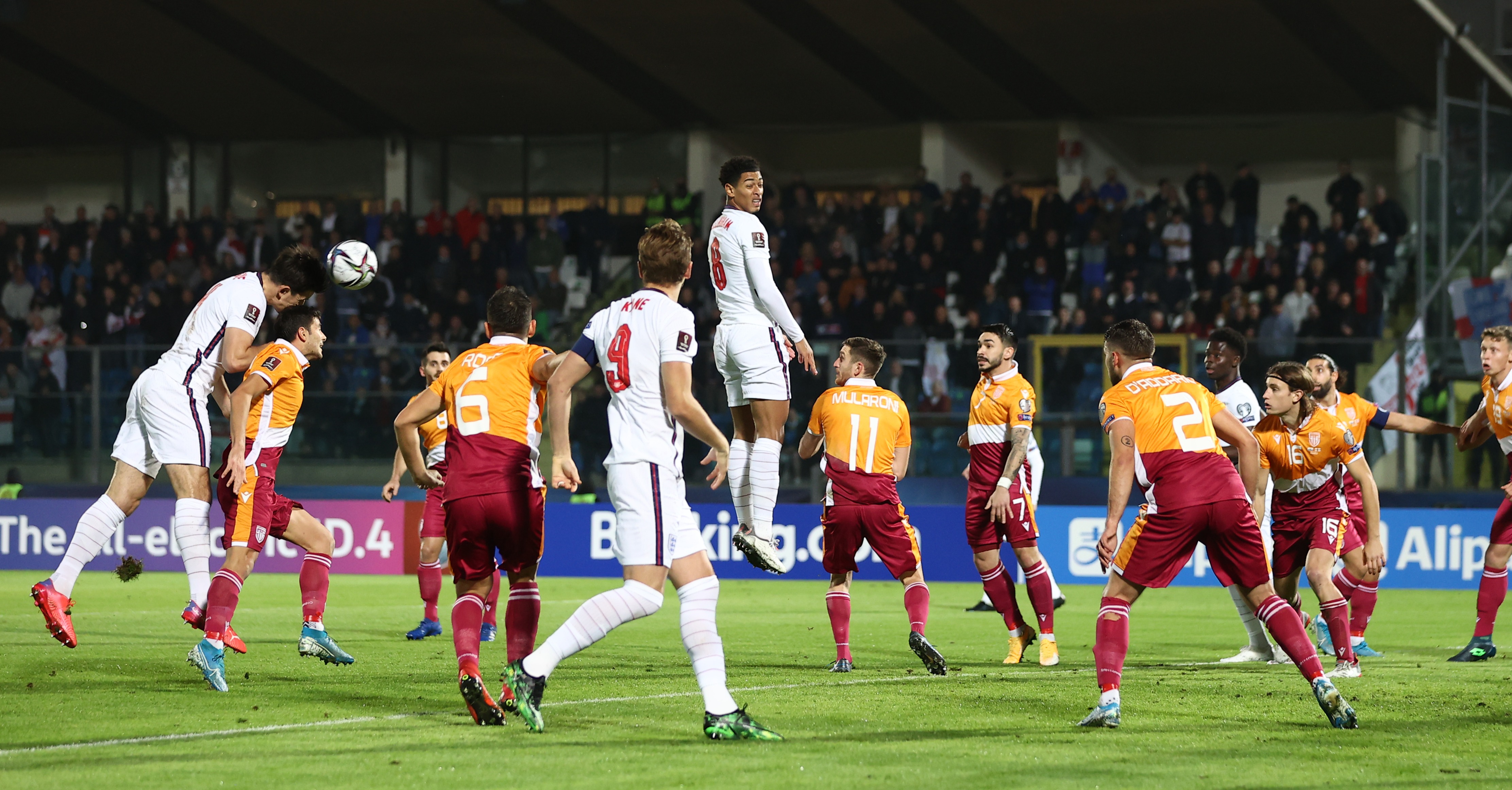 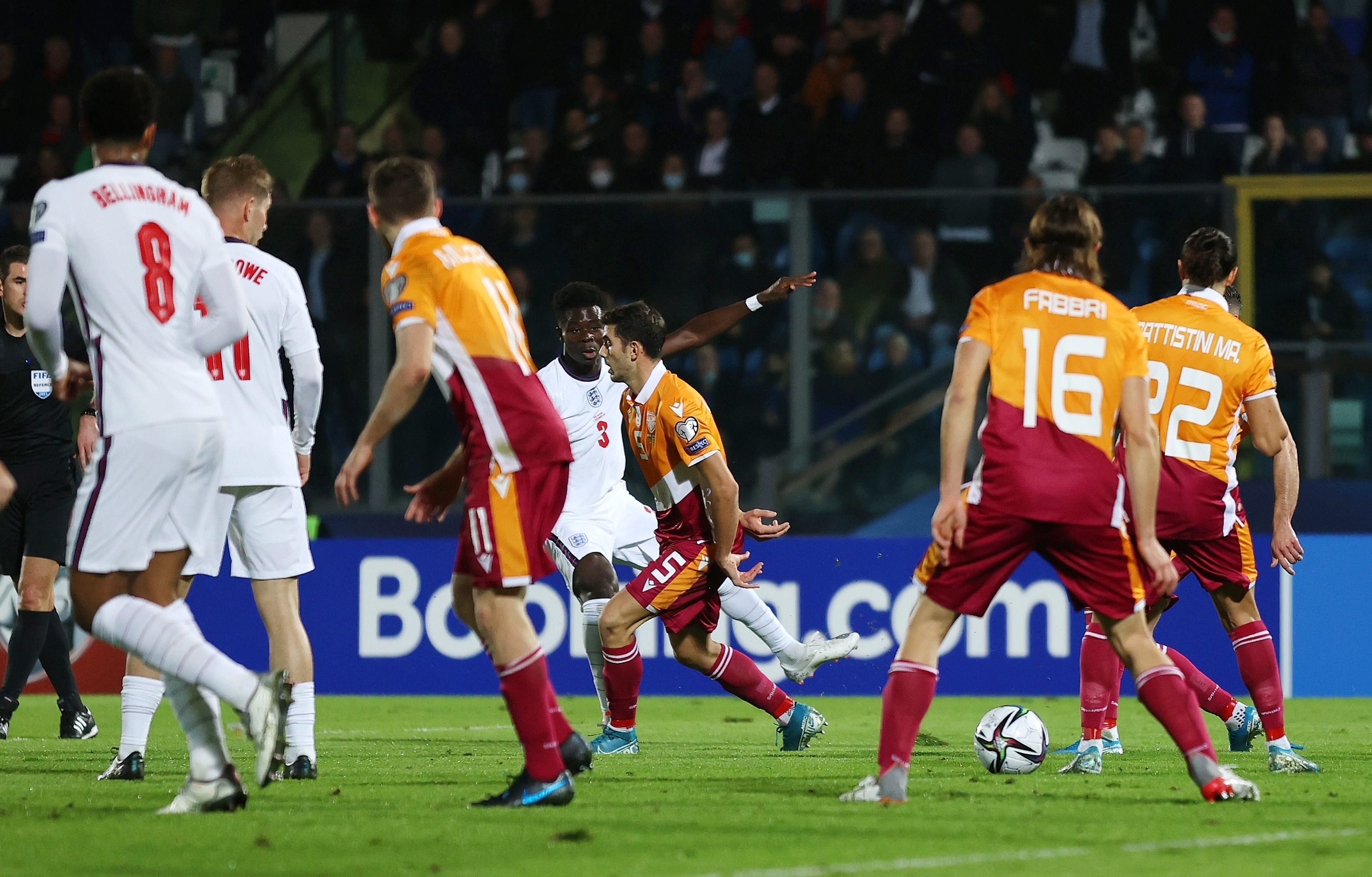 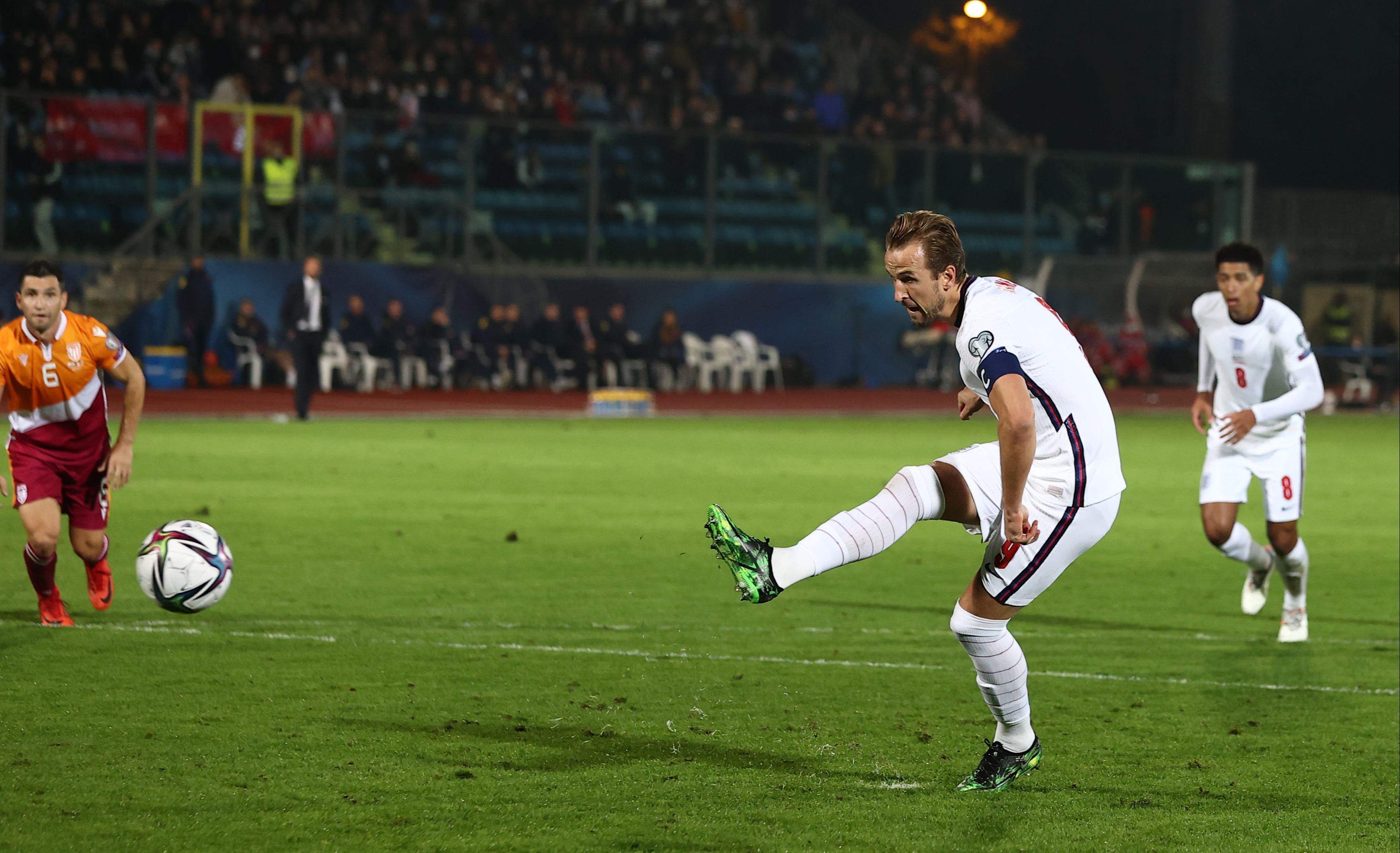 Four more goals in a quarter of an hour, leaving only Bobby Charlton and Wayne Rooney ahead of the Spurs ace, helped Gareth Southgate’s side seal qualification for Qatar in the grand manner.

Kane may have come into this international break on a personal low.

But he will return to Spurs and new boss Antonio Conte absolutely flying and desperate to tear into Leeds on Sunday.

Seven goals in just two full halves of football made Kane the first England striker to score back to back hat-tricks since Dixie Dean in 1927.

The scary thing is that he didn’t really have to try.

Nor, in truth, despite the fun and frolics enjoyed by Bukayo Saka and Phil Foden in particular, did England, who could give Conor Gallagher a 45-minute pressure-free run-out.

But that is not England’s fault. They merely did their job, from the instant Harry Maguire broke the ice after just five minutes, through Kane’s goal glut and Emile Smith-Rowe’s first to the Saka goal that secured double figures for the first time since 1964.

Pitting one of the world’s great strikers against the planet’s worst international defence was more than a mismatch. It was cruel.

Kane lives for goals, for the opportunity to put the ball past the opposition keeper.

The skipper must have been licking his lips from the moment he walked into the Stadio Olimpico.

Like his fellow Harry, Maguire had badgered Southgate for the chance to start, as he did in a back three, one of just four to hold their place from the Albania romp.

In came Aaron Ramsdale for a debut in goal, plus Arsenal team-mates Smith-Rowe – making his first start – and Saka, at left wing-back. 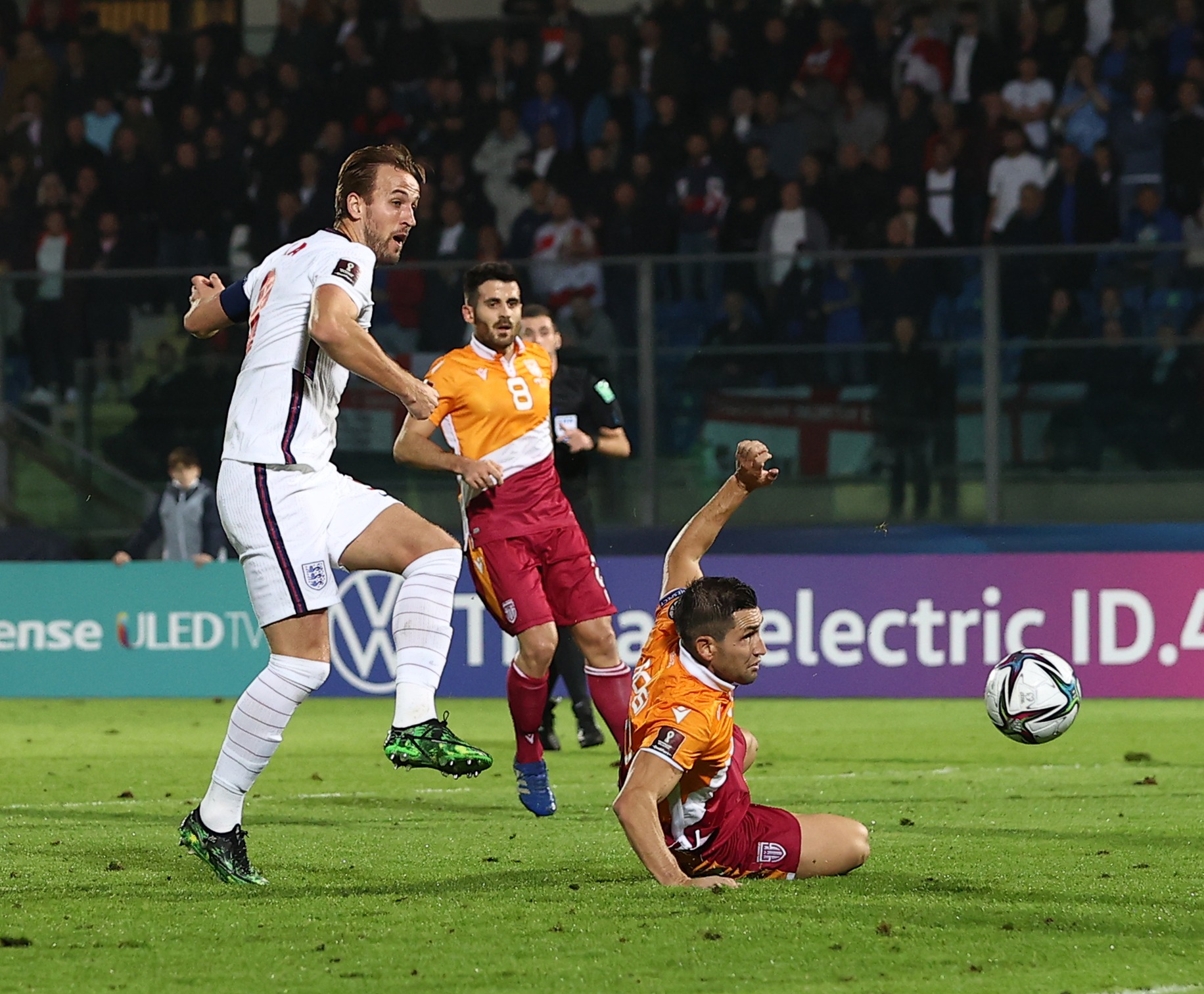 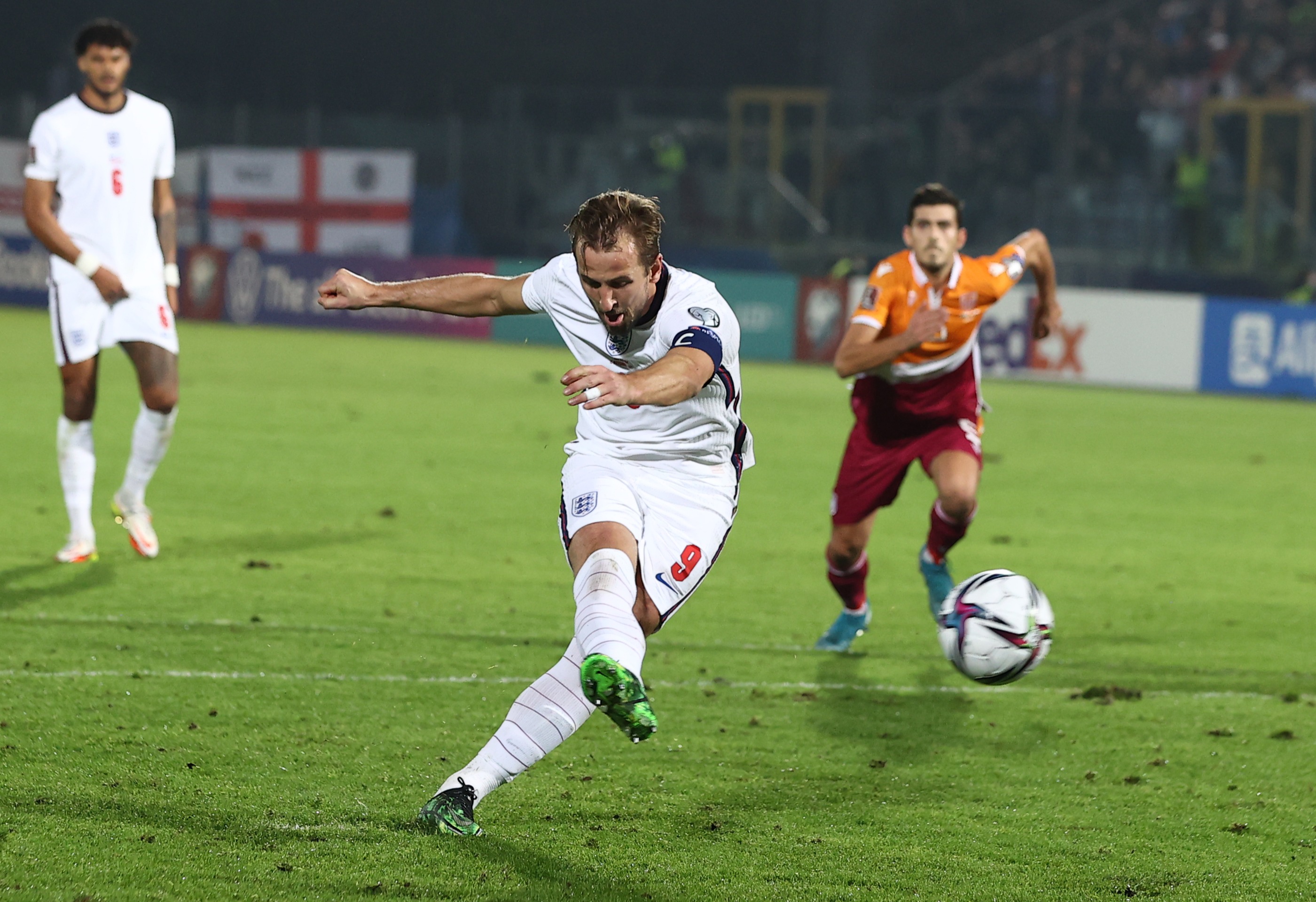 Conor Coady and Tyrone Mings were in the back three, Jude Bellingham in the centre and Trent Alexander-Arnold on the right.

From the outset, they were too big, too strong, too quick, too good for the minnows.

Maguire’s fifth international goal of the year came when Foden’s corner landed bang on the old “Slabhead” and the second was down to Saka’s shot, although it was deflected past helpless keeper Elia Benedettini by defender Filippo Fabri.

Foden was so comfortable, flitting across the turf and mesmerising the home side, although Smith-Rowe was, if anything, trying a bit too hard.

But the goals kept coming, even if Kane was given a helping hand for his record-breaking strike.

Foden’s acrobatic overhead from Saka’s cross looked to have just gone wide but the VAR official spotted a hand from defender Dante Rossi that nobody else had even considered.

Even the travelling England fans voiced their displeasure but Kane does not look a gift horse in the mouth.

It made him the first England player to score more than 12 in a calendar year and also the first to score 40 goals for a single manager, in his 50th appearance under Southgate. 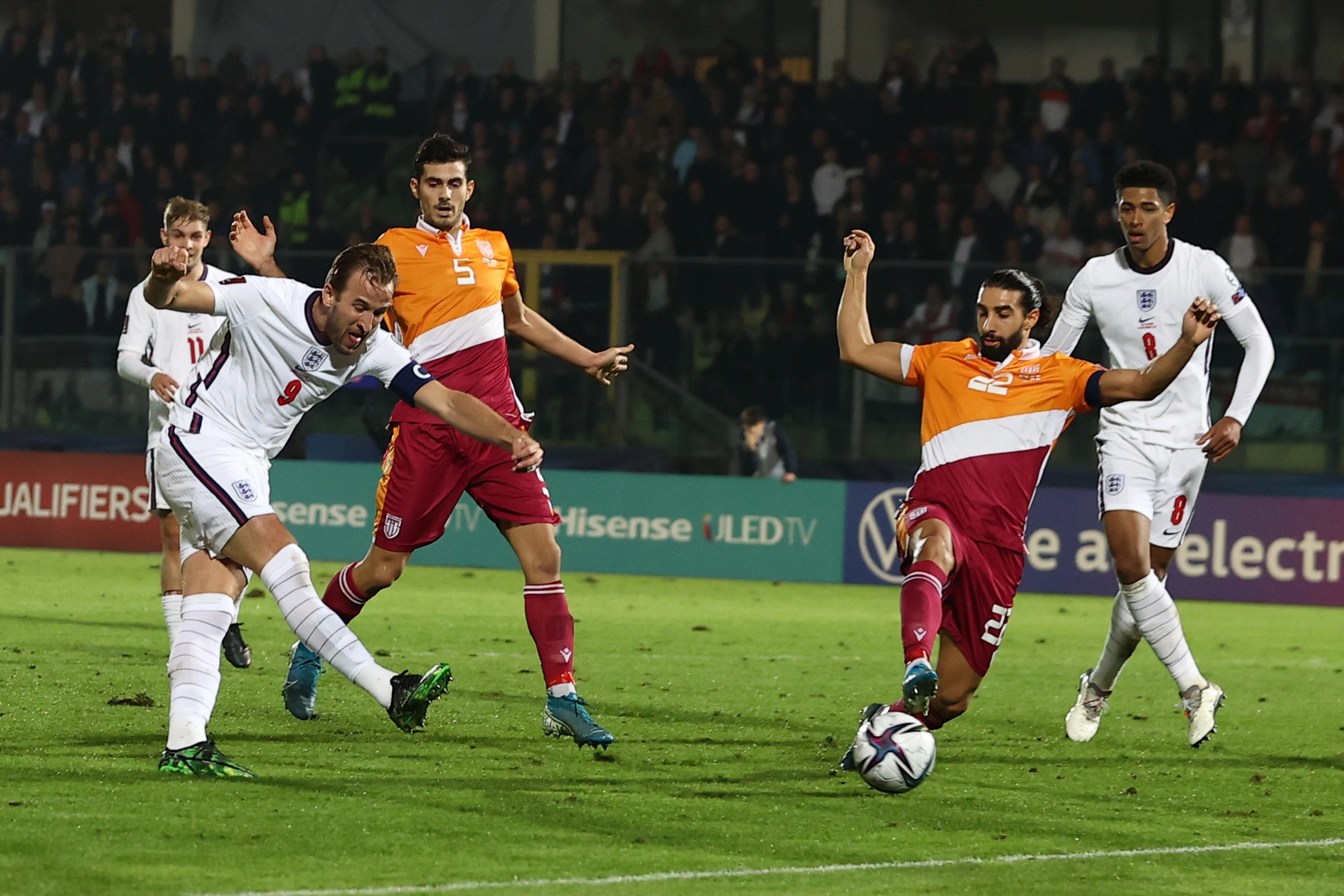 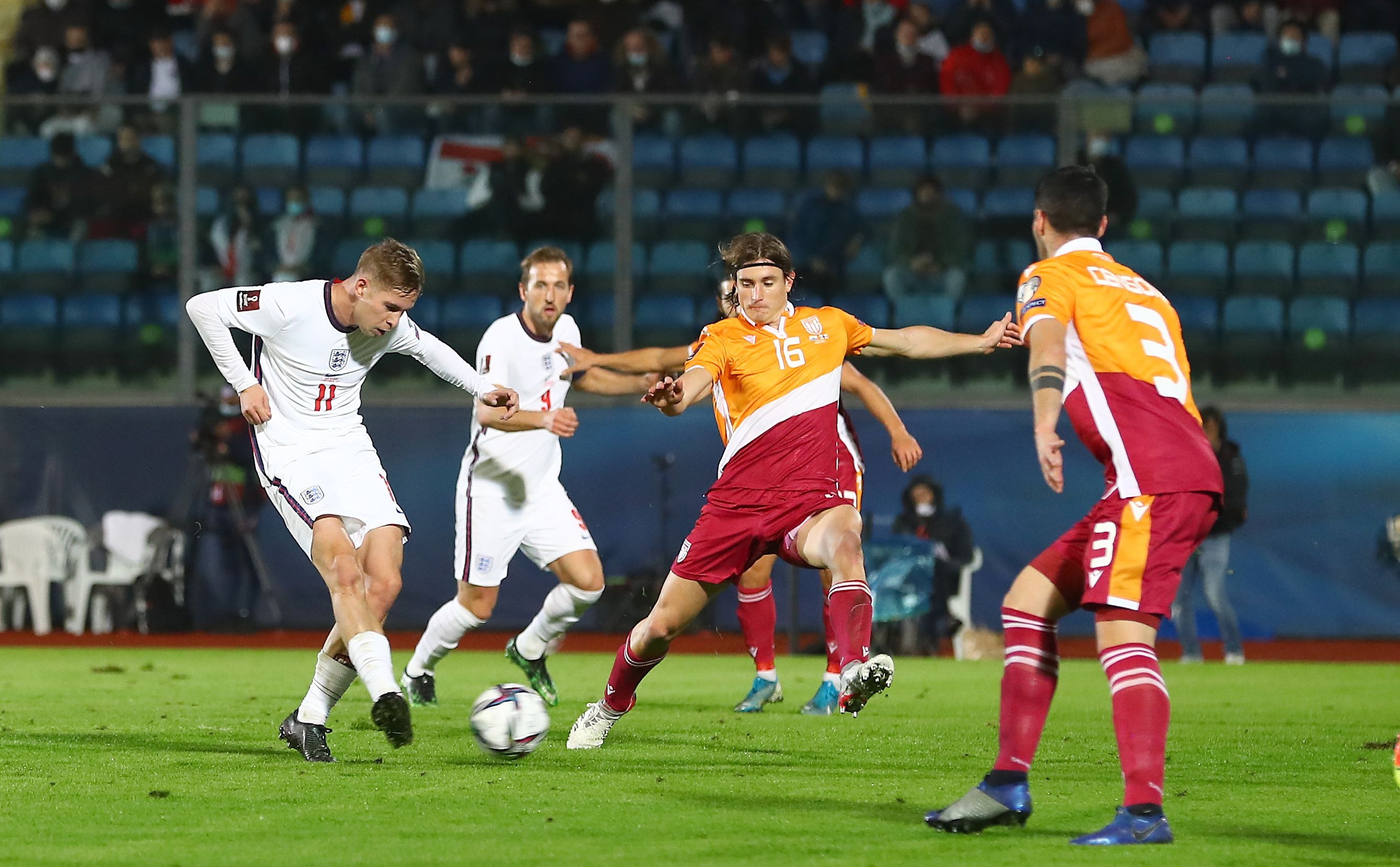 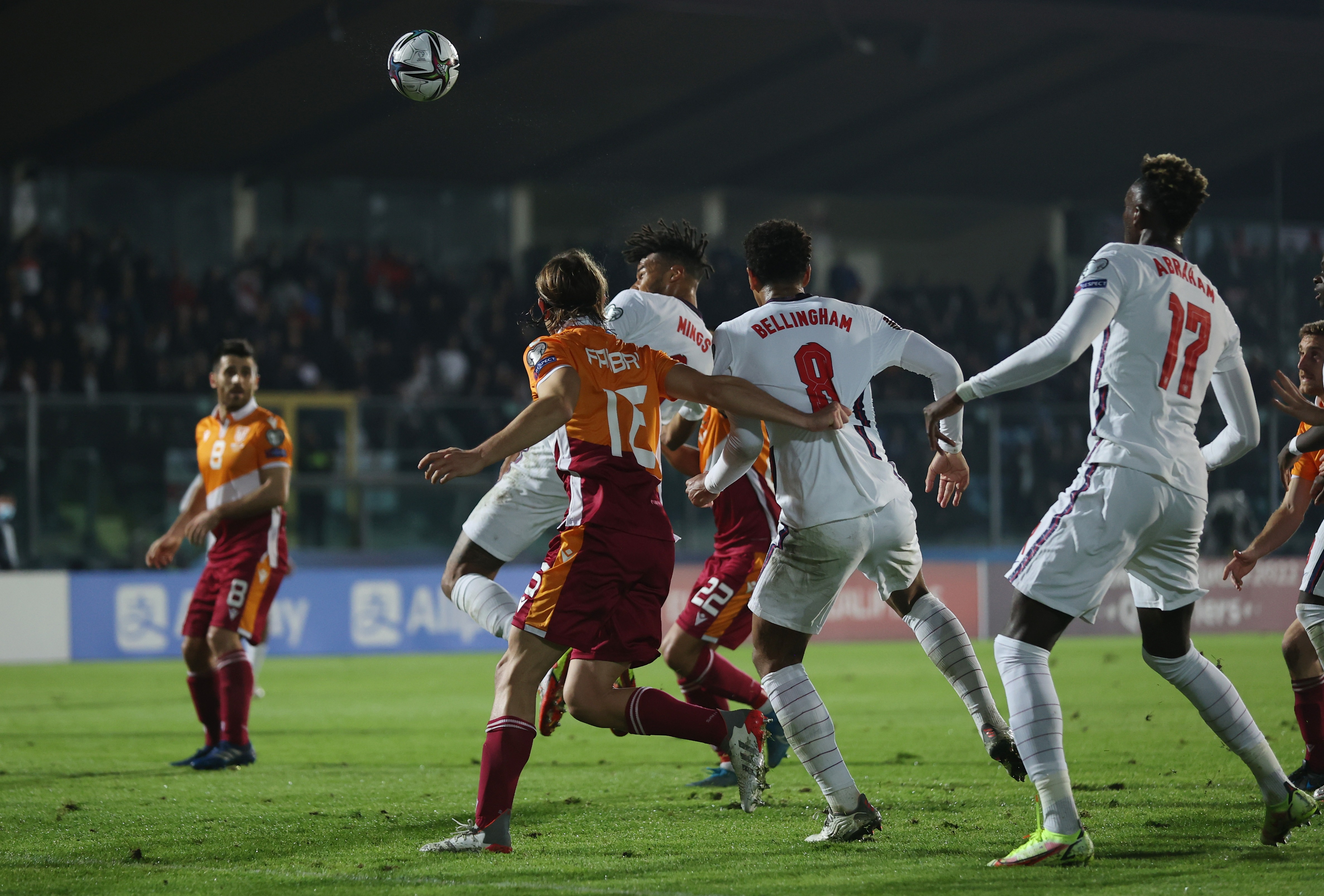 But it was just the start. His second of the night came from the next attack, Smith-Rowe, fed by Kalvin Phillips, teeing up a first-time left-footer that dribbled into the bottom corner.

The biggest cheer came when Ramsdale had to plunge to his right to turn aside a shot by Nicola Nanni – scorer of San Marino’s only goal of the campaign.

But normal service was swiftly resumed and this time there was no arguing about the spot kick for Kane’s hat-trick – slammed into the roof of the net – after his goalbound header was blocked by a raised arm.

Kane’s fourth followed as he slalomed round the static orange and maroon shirts – as mobile as ski poles in the mountain-top state – to steer home once more.

The only surprise was Kane coming out after the break, as Southgate threw Gallagher, Tammy Abraham and Ben Chilwell on for Maguire, Foden and Phillips.

Abraham lofted a sitter over the bar but then played in Smith-Rowe to gleefully score his first in an England shirt. Don’t tell him it was “only” San Marino.

That was enough for Kane, now level with Gary Lineker on 48, and when Rossi saw red for a foul on Gallagher, Mings converted the resulting Alexander-Arnold delivery. 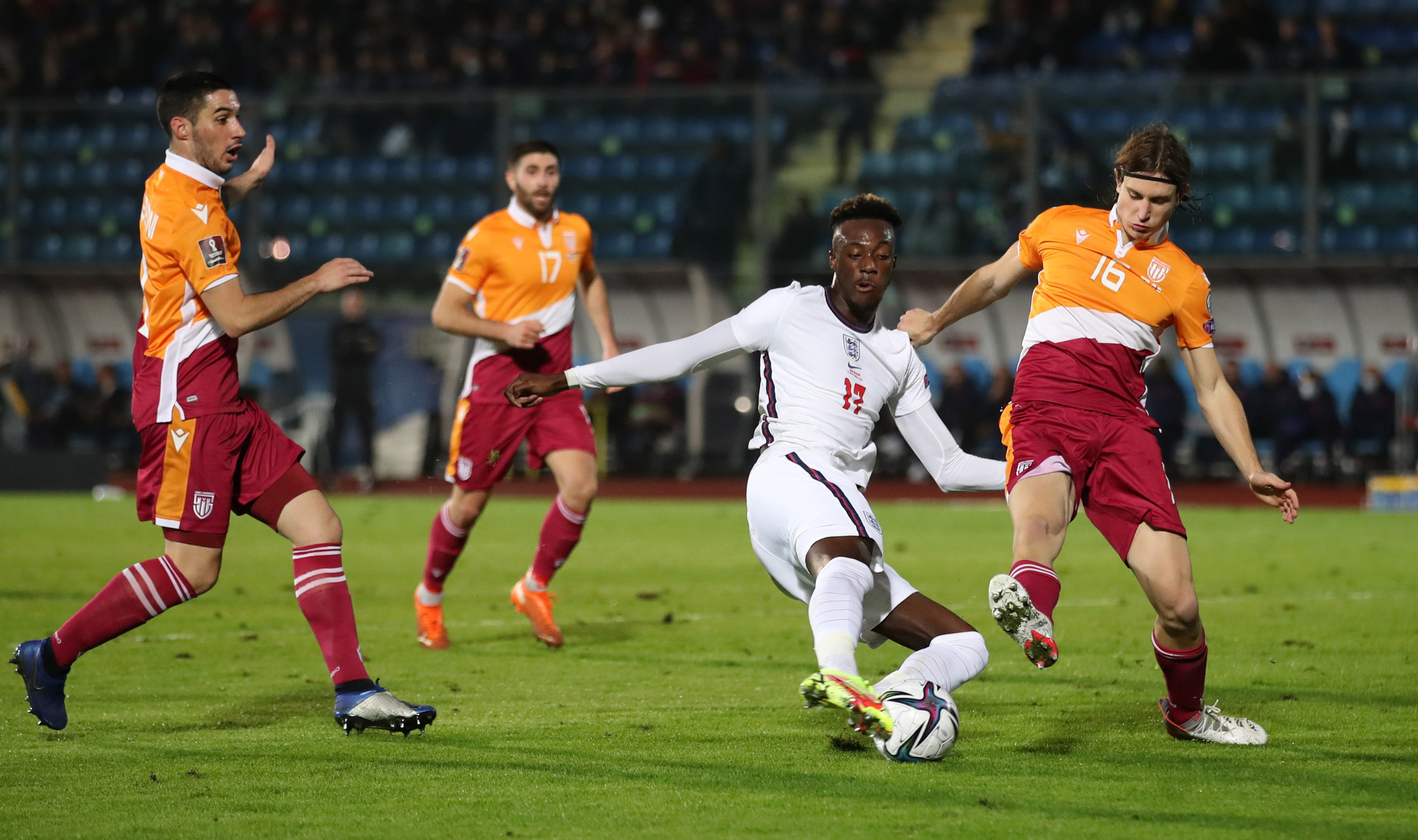 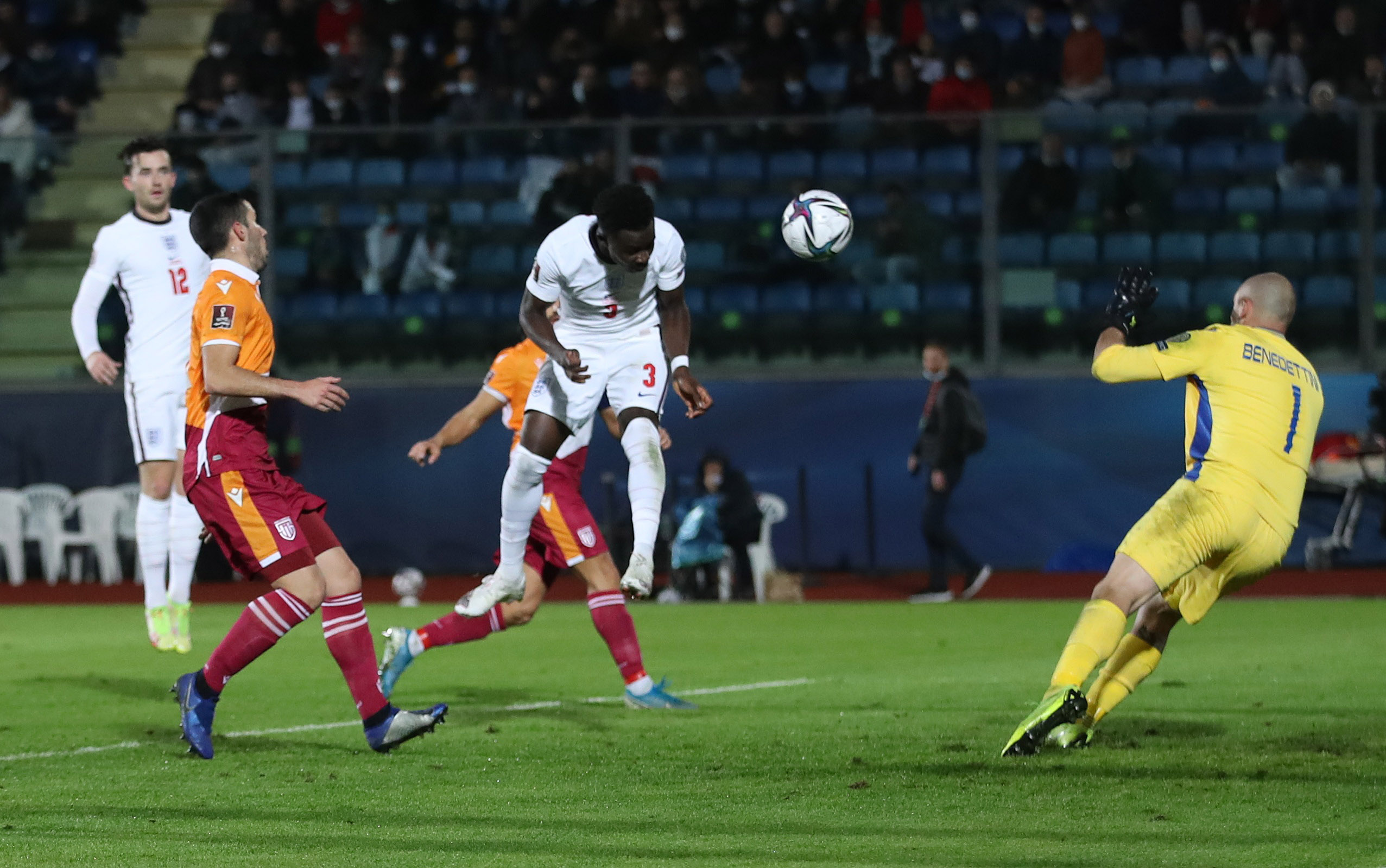 Bellingham was denied by VAR after thrashing home from 12 yards with Abraham adjudged to have committed a foul.

The Roma striker made up for that with a smart chest and finish before Saka headed in from close range for the 10th.

Plenty enough. But Kane looks like he is just getting started. Not a bad way to finish the year.