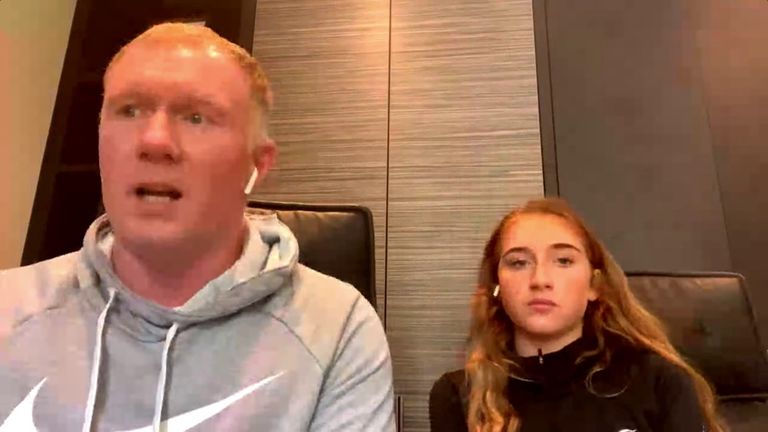 Alicia Scholes, Manchester Thunder’s training partner and England U21 athlete, discusses being inspired by England’s achievements in 2018 and the lessons she’s learnt from her father.

The 19-year-old, who was named as a member of the defending champion’s squad for the 2020 Vitality Netball Superleague season, has been part of Thunder’s youth set-up for some time.

Having been involved with England U17, U19 and U21 squads, she’s had a clear view of the senior Roses squad’s achievements in recent years and Alicia has taken their success on board.

“I do feel so lucky to have that England Commonwealth Games team ahead of me and my generation being able to watch them,” the mid-courter player said on Sky Sports’ The Netball Show.

“We are there to challenge them [Australia and New Zealand] and not just be second place or third place. In the future we do want to go for those gold medals and prove that we are just as good as them.”

Scholes may have taken inspiration from the Roses’ senior squad, however she’s not one who is about to run before she can walk in the international arena. Indeed, thoughts of that nature are far from her mind.

“If anything, what I’ve learnt from my dad is to never look too far ahead of yourself,” she said.

“He says to me before I go to training, Thunder should be my main focus and every single time I train there, I should learn and get better. Obviously, it’s every girl’s dream to play for England but I never look at that now.

“I just want to make sure I am the best I can be for Thunder and I want to be one of those players who can go on court every week and do my best. I’d like to be well-known at Thunder, rather than look too far ahead.” Paul knows exactly what it’s like to come through a youth academy system at a Manchester club, having done so with Manchester United and been part of the famous ‘Class of 92’.

He made his own senior debut aged 19 and went on to make 718 appearances for United. As an integral part of one of the most high-performing teams of a generation, he’s in the perfect position to guide Alicia when it comes to her sporting future.

“I think it’s important that she continues to develop and learn. I don’t think she needs to set targets at this age,” he said on The Netball Show.

“She’s only 19 and is getting great experience at the minute. She’s got Rachel Henry who’s an ex-Superleague player as her coach at Bury and Jade Clarke also plays, and you cannot get a more experienced girl than that.

“Jade’s absolutely brilliant with Alicia with great advice, not just for Alicia but for the rest of the team as well.

“She’s also training every week with the best team in England which is Manchester Thunder. There’s no need to set targets – keep doing what she is doing, keep learning and I’m sure the future will be bright.”

👫Like daughter, like father…@ThunderNetball's Alicia Scholes is joined by dad Paul Scholes on the #SkyNetballShow to discuss what it takes to succeed in sport.pic.twitter.com/xYwMbxISQ4

With Alicia having played netball from a young age, first taking to court around the age of six or seven, Paul is a netball father with considerable knowledge and shared his thoughts about the sport as a whole.

“I think technically and tactically you have to be very good as well, especially somebody playing in the centre court. It is a great game to watch. It’s exciting, it’s end-to-end.

“The girls have to be so fit and I’ve witnessed the fitness work that Karen [Greig] does at Thunder, that Rachel [Henry] does at Bury. It is very difficult and it seems like every other week they have a bleep test. I wouldn’t have enjoyed it!