OMAHA, Neb. – History was made at the U.S. Olympic swimming trials Wednesday night, and it was entirely appropriate that Katie Ledecky was the one to do it.

For the first time ever, women are being allowed to swim the mile – the grueling 1,500 meters – at the Olympics Games, and by churning to the fastest time in the world this year here in the final, Ledecky was, is and will be the strong favorite for the gold medal in the event.

Men have been swimming the 1,500 in the Summer Games since 1904. It took only 117 years for the old boys club running international sports to give women the same chance.

“It’s about time,” Ledecky, 24, said after a frenetic hour in which she won her shortest event, the 200 freestyle; had to show up for the 200 medal ceremony and a pool-deck interview; then dive in for the 1,500. 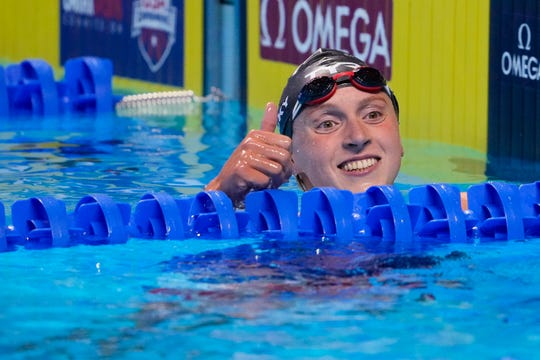 “I’m just so grateful that we have the mile in (the Olympics) now,” she said. “I’ve spoken about the equity that we finally have there and I think that’s a big step. We’re making history tonight and we will be in Tokyo, so that’s fun in its own way.”

Fittingly, her medal for the 1,500 was given to her by Olympic gold medalist and distance swimming legend Janet Evans, who has been a role model of Ledecky’s.

“Only in my dreams back in the day would a woman get the opportunity to compete in the 1,500, and to have the great Katie Ledecky do it, one hour after winning the 200, is truly historic,” she texted.

Caeleb Dressel, expected to be every bit the star of the U.S. Olympic men’s swimming team that Ledecky will be on the women’s team, finally started his Olympic trials in earnest on Day 4 with the preliminaries and semifinals of the 100 freestyle.

He qualified first in 47.77 seconds, the fifth fastest time in the world this year.

“These meets are quite miserable when you’re not swimming,” he said. “You’re left with your own thoughts. The most comfortable I feel is in the water. I feel good and have gotten better every swim.”

The results were not nearly as positive for Nathan Adrian, 32, the winner of five gold medals and eight medals overall in three Olympic Games who failed to qualify for the eight-man 100 free final, finishing 13th overall.

“There’s no doubt it’s disappointing,” he said. “This is such an all-in sport. Unfortunately, I wasn’t able to stick two good swims together. I had a good swim this morning but backing that one up, I honestly don’t know what happened."

But he was at peace with his performance here.

“Who would have guessed? I mean, 13 years ago, I was a 19-year-old kid sneaking into the finals and then making a prelims relay in Beijing. What an absolute dream come true to be able to compete at the highest level, until now.”

He still has a chance in the 50 freestyle later in the trials.

Another veteran with an entirely different experience Wednesday was 31-year-old Allison Schmitt, who qualified for her fourth Olympic team by finishing second to Ledecky in the 200 freestyle. Schmitt, who has won four gold medals and eight overall in her previous Games, has been outspoken about mental health awareness, and shared a long hug with her good friend and fellow mental health advocate Michael Phelps on the pool deck after her race.

“I mean, that was full of a lot of emotion,” she said. “I know for me personally, successes I have in the pool, those are going to fade. The medals go under your bed and the records are going to be broken, and at the end of the day it’s what you can do with that, and I have embraced that that platform for me can be used for mental health.”

Ledecky’s time of 1:55.11 in the 200 free was two seconds slower than what Australia’s Ariarne Titmus swam Monday at her nation’s trials, meaning Titmus will be the likely gold medal favorite in the event, as she will be in the 400 free.

But for Ledecky, the race was all about qualifying for the Olympics in her second event, then getting out of the pool and getting ready to swim a mile in little more than an hour.

An hour, nine minutes and 28.64 seconds to be precise. I started my stopwatch the moment Ledecky touched the wall in the 200 and stopped it when she dove in for the 1,500.

Here’s how it went, in Ledecky’s words:

“So I got out of the 200 and I knew I was allowed to skip the NBC interview. The goal is to get in the warm-down pool as quickly as I could, which I did pretty successfully. Tried to keep moving, just hydrated and swam for 15-20 minutes before they pulled me to go back to awards.”

Let’s stop here to explain that the Olympic trials schedulers decided to drop the 200 free medal ceremony into the middle of Ledecky’s crazy hour, requiring her to leave the warm-down pool and join the elaborate ceremony that every winner receives.

“On the way over to awards – it’s a little bit of a walk – I ate a banana and drank some chocolate milk and drank some water, put my jacket on as I was walking, just trying to be as efficient as I could while still walking slowly so I wouldn’t exert any more energy than I needed to.”

She answered one quick question in a pool-deck interview, then slowly walked the length of the competition pool back to the warm-down pool.

“I got back in the pool and just continued to swim kind of moderate. I knew that just staying moving would be best for me."

Soon she was diving back into Lane 4, her home away from home, going back and forth 30 times, taking the early lead and increasing it each lap, winning the 1,500 in 15 minutes, 40.50 seconds, the fastest time in the world this year by 5/100ths of a second.

Who held the previous fastest time in the event this year? Of course it was Ledecky.