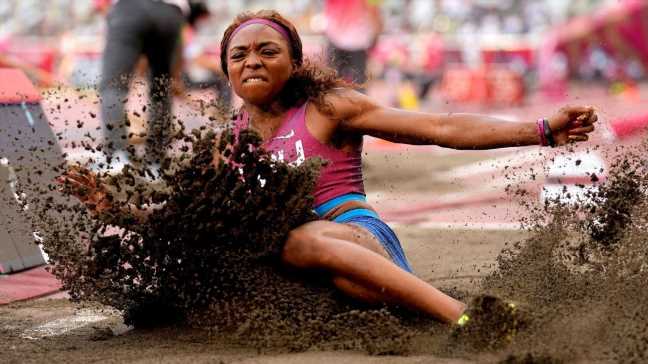 Tory Barron is a Bristol-based writer and editor for ESPN.com. After retiring from playing lacrosse at UConn, the DC native decided to try her hand at writing about people playing sports.

“In my mind it just sounds normal. Work hard, then you’ll be an Olympian.”

Quanesha Burks is an Olympian. Within a minute into our conversation it’s abundantly clear why. Aside from the whole “she can jump absurdly far thing,” — Burks holds three school records at the University of Alabama and won the 2015 NCAA outdoor and 2016 NCAA indoor long jump titles — the 26-year-old is also uniquely motivated and boasts an infallible sense of self.

Burks was as certain that she was going to be an Olympic athlete as Dallas fans were that “Dez caught it” in the Cowboys’ 2014 NFC playoff game against the Green Bay Packers.

“The confidence had been instilled in me from a lot of hard work when I was younger, all I needed was an opportunity,” said Burks of qualifying for Team USA.

I talked to Burks before she finished just outside of qualifying for the Olympic final on Sunday in Tokyo and instantly began to rethink my idea of “hard work” as the Hartselle, Alabama, native recalled her high school routine: Driving her grandmother to work at the local nursing home at 4:30 a.m., making the 30-minute trek back to get her younger sisters ready for school, going to school herself, attending track practice, then working at McDonald’s from 4 p.m. to 10 p.m.

Burks details a normal day in her 17-year-old life without a single hint of resentment or acknowledgement that most kids her age had far less responsibility. “I didn’t look at it as, ‘Oh my gosh, this is challenging.’ I looked at it as my baby sisters are looking up to me, I want to pave the way for them.”

“I knew that we needed that money from McDonald’s,” Burks explains of receiving her $113 check every two weeks, which she put toward car insurance. “I knew that my family needed me. I had a purpose.”

Ironically enough, it was Burks’ unparalleled work ethic that almost kept her from accomplishing her ultimate dream of becoming an Olympic athlete.

When college coaches came calling to recruit Burks — who would go on to become one of the most-decorated student-athletes in Alabama track and field history — she gave them the run around.

“I can’t talk to you right now. I’m doing drive-thru,” she remembers saying to multiple coaches on several occasions. “Coaches would come in to the McDonald’s lobby and wait for me on my break to recruit me.”

Eventually, Alabama coach Miguel Pate enlisted the help of Burks’ high school coach, Kenny Lopez, to explain what a full scholarship would mean for her and that her days of working at McDonald’s could be put behind her.

Even so, the 11-time AHSAA state champion who set seven school records, continued working at the fast food chain after committing to Alabama and through high school graduation. In the fall, after football games, her classmates would pull up to the drive-thru and see one of the most highly-touted athletes in the state there working instead of socializing on a Friday night.

But Burks didn’t mind. She was too focused on fulfilling her purpose to be concerned with the high school microcosm. “Even before Alabama I told everyone, I’m going to get a full scholarship. I’m going to be the first one in my family to go to college. I’m going to have my pick of any school. … So many people laughed, ‘OK Quanesha, you work at McDonald’s,’ but I just never stopped because I knew my purpose was bigger.”

The long jumper is quick to heap praise upon her first real job. She speaks with reverence about the manager “Ms. Molly” who hired her and has supported her Olympic dreams since the beginning. Burks is also adamant that the skills she developed at McDonald’s have allowed her to succeed in her pursuit of Olympic glory.

“Working in a fast food chain helped me become the person I am. … How to handle things under pressure. During rush hour you have to flip burgers, take orders and be professional at the same time. In track and field, you’re at the Olympic trials, every jump counts. You’re trying to make a team, so everything I learned from a young age has equipped me to be where I am.”

At the risk of sounding cliche, Burks is wise beyond her years. She is five years my junior and yet, the only time throughout our conversation when I felt we were in the same maturity bracket was when she confessed the coolest part about becoming an Olympian — aside from being interviewed by yours truly — was when singer, Ciara, liked SportsCenter’s Instagram post about her journey.

You know the philosophy that whatever you put out into the universe is what you’ll get back? Well, if I wasn’t buying it before, Burks made a believer out of me. She is walking, jumping proof of how powerful manifestation can be, especially when combined with the tunnel vision that responsibility demands.

She kept showing up for her family and for herself, putting in the work, despite her circumstances. Burks faced more than her share of setbacks, injuries and, most painful of all, the death of her grandfather in 2019.

Yet, she remained steadfast in the pursuit of her goals and never wavered from her belief that she was meant to be an Olympian, even taking to TikTok to proclaim it over and over again.

While I am wholeheartedly convinced Burks should be teaching a MasterClass on how to manifest your dreams (and would go to questionable lengths to attend), her only plans for after Tokyo include finding time to return to the McDonald’s in Hartselle where her dreams took root.

She might even allow herself to indulge in what was her go-to meal: Medium fries, no salt (she is an Olympic athlete, afterall), a Quarter Pounder with only extra bacon, cheese, pickle and mayo, and a caramel sundae with Oreos on top.

Burks went to a McDonald’s after the Olympic trials, too, petitioning her ride share driver, “Could you take me to McDonald’s real quick? … I just made the Olympic team but don’t say nothing to nobody.” If a more full circle celebratory moment exists, I’m having a tough time envisioning it

After hanging up the phone I sat in silence, enthralled by everything I had just heard.

No matter what she did on the Olympic stage this week, her story will remain a gift greater than her physical talents . At the very least, she’s made it clear we’re not dreaming big enough.