Questions about out-of-favour centre James Roberts won't go away despite Brisbane coach Anthony Seibold trying to shut them down on Thursday.

Seibold insisted the NRL selection door had not been closed on Roberts despite snubbing him for a second week, but gave little away on what the incumbent NSW centre must do to open it again. 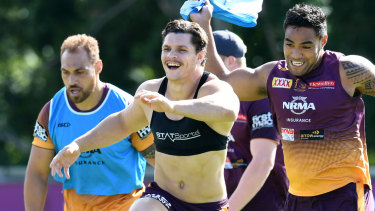 Seibold has already tried to dismiss speculation he had fallen out with Roberts but it only intensified this week after the speedster was again overlooked despite centre Jack Bird's season-ending knee injury last round.

Seibold raised eyebrows when he opted for three-game youngster Gehamat Shibasaki, instead of Roberts, to line up against star centre Latrell Mitchell in Friday's clash with ladder leaders Sydney Roosters.

But Seibold was in no mood to justify his selection on Thursday when asked if Roberts' omission was personal.

"I am not going to answer any more questions (about Roberts). I have answered three or four times now over the last four press conferences," Seibold said. 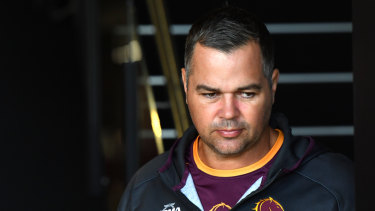 "There's no lack of feedback. There hasn't been a falling out. I just think at the moment James has got to work on some areas of his game."

But asked what areas Roberts had to fix, Seibold said: "That sort of stuff stays in house, I am not going into specifics.

"I am not going to sit here and justify my decisions and selections any further."

Seibold only said Roberts had to train hard and play well for their feeder club, Queensland Cup side Wynnum.

However, Roberts has had no chance to impress for Wynnum since being dropped after their heavy round eight loss to South Sydney.

The Queensland Cup had a bye last weekend and Roberts is unable to play in Wynnum's clash in PNG against the Hunters this week because he does not have a visa.

Seibold confirmed Roberts would remain in Brisbane and continue training at Red Hill.

Roberts' career appears in limbo after going from incumbent NSW player to Brisbane's fourth ranked centre in a matter of weeks.

Roberts – not off contract until 2021 – appears to have no choice but to fight his way back into the side after NRL rivals South Sydney ruled out signing the speedster.

But Seibold insisted Roberts was still in the selection mix.

"There's no other avenue for Jimmy to get back in the team other than to train and play well but he's a quality player – the door is not shut on Jimmy," he said.