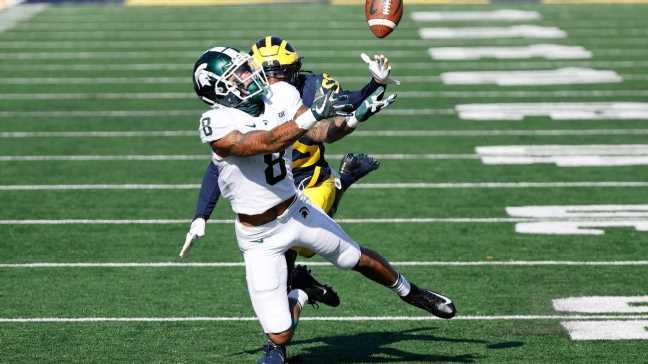 Michigan may be a state divided this week, but local bettors are leaning green on what is expected to be one of the most heavily bet college football games of the season nationwide.

No. 6 Michigan is a 4-point favorite over No. 8 Michigan State for Saturday’s showdown in East Lansing between the pair of undefeated rivals. To bet on the Wolverines on the money line, bettors have to stake $185 to win $100. As of Thursday, for every money-line bet on the Wolverines, there were nine on the underdog Spartans at DraftKings’ sportsbook in Michigan.

“This will be much busier than any other college football game — in fact, any other football game — this year, with the exception of maybe the Super Bowl,” Cameron Steinagel, chief financial officer at MGM Grand Detroit, told ESPN on Thursday. “This is getting definitively more money than any Lions game.”

The bulk of the early money from local bettors has been on Michigan State, while nationally the betting is much more evenly divided. At Caesars Sportsbook in Michigan, 94% of the money wagered on the point spread was on the Spartans. However, across all Caesars sportsbooks, Michigan State had attracted 55% of the money.

“Handle in Michigan for this game will be huge, especially as the other team in Michigan — the Detroit Lions — haven’t won a game,” Craig Mucklow, vice president of trading for Caesars Sportsbook, said in a release. “So the local focus on this game is massive.”

Michigan-Michigan State was the most heavily bet game on the board at multiple sportsbooks across the country. Heading into the weekend, approximately 30% of the money bet on the game nationwide at Caesars Sportsbook was coming from bettors based in Michigan

Both teams have exceeded expectations, increasing the interest in an already intense rivalry. Of the 114 meetings between the schools, this will be the first time since 1964 that both teams will be ranked in the top 10 entering the game.