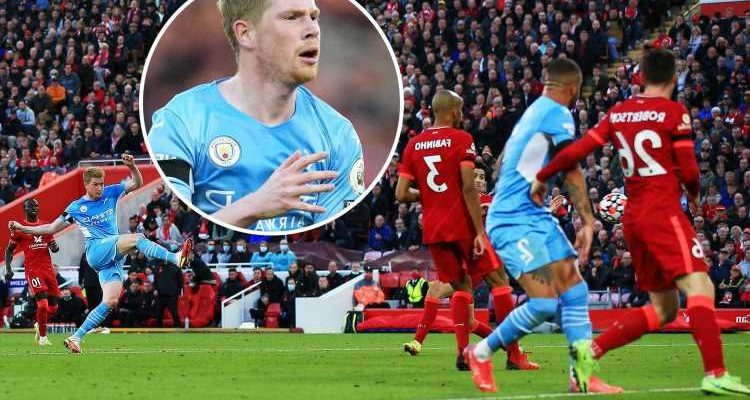 KEVIN DE BRUYNE rescued a point for Manchester City after Pep Guardiola’s men twice fell behind in a whirlwind second half at Anfield.

After Pep Guardiola’s champions had dominated a goalless first half, Sadio Mane and Mo Salah both fired Liverpool ahead – but first Foden and then De Bruyne saved Guardiola’s skin. 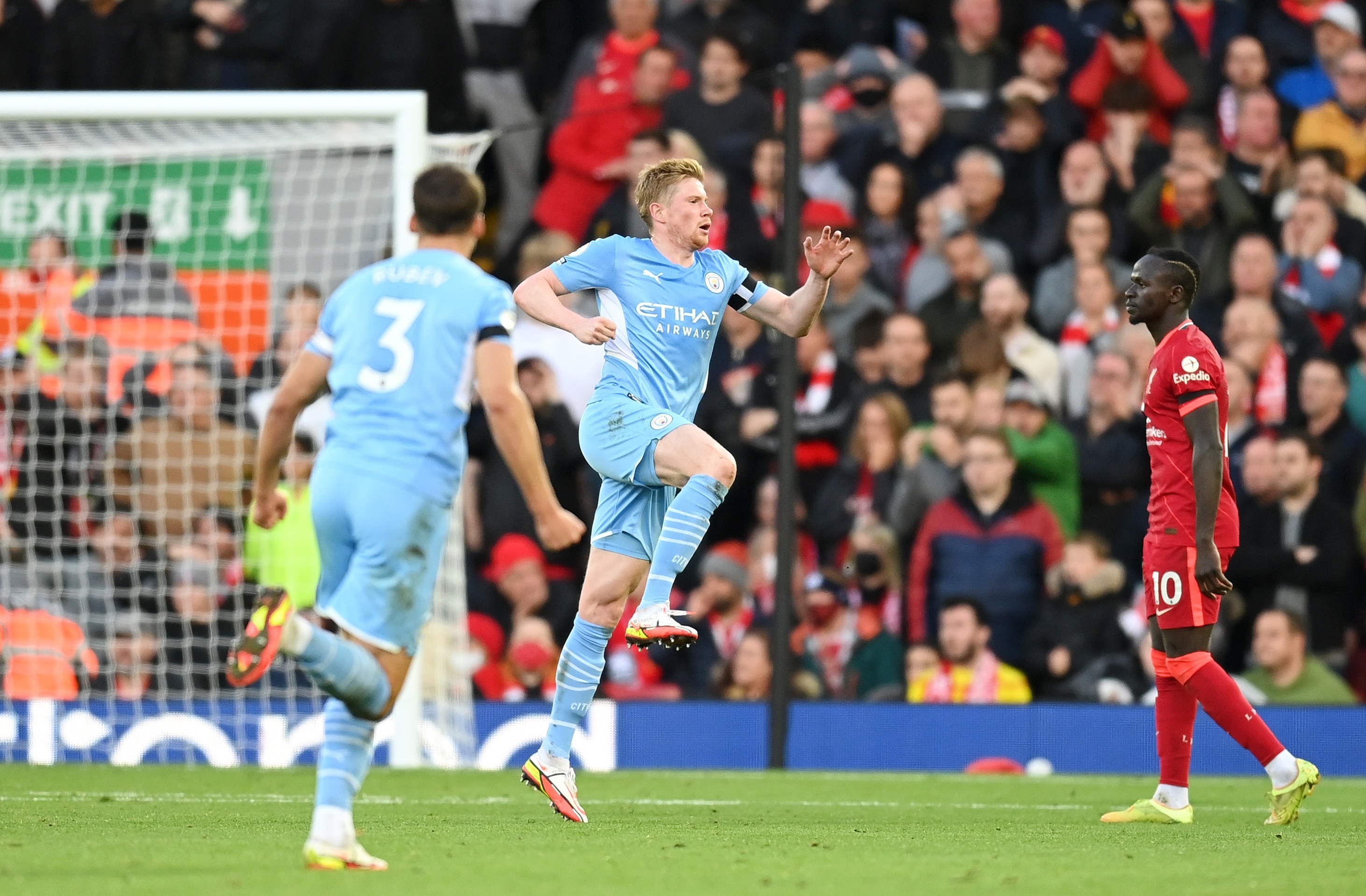 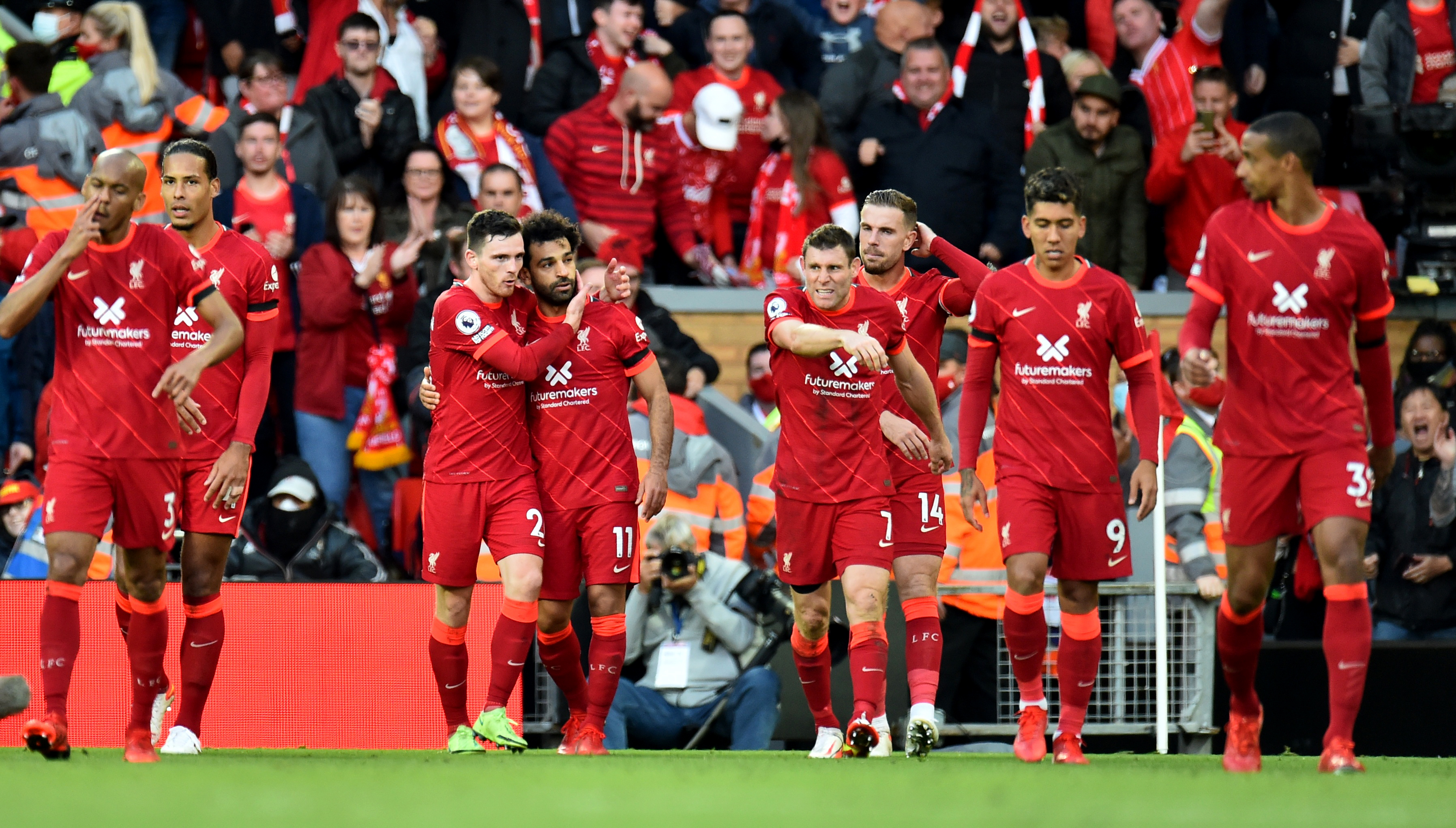 After a testing week which saw City travel to Chelsea, Paris St Germain and Anfield, and produce excellent performances in all three, Guardiola’s men emerged with just one win.

The second half oozed with quality and controversy – with Salah’s majestic solo goal the highlight and Paul Tierney’s refusal to award James Milner the clearest of second yellow cards sending Guardiola into a rage.

But neither side could muster the victory which would have seen them overhaul Chelsea at the top of the Premier League, in the early stages of a title race which promises to be the most intriguing for years.

City had stormed an empty Anfield last season for a thumping 4-1 victory in February, which was a disaster for Liverpool keeper Allison and a pivotal point in Guardiola’s side regaining their crown.

Yet they still hadn’t won at Liverpool in front of the world’s most self-important supporters since 2003.

Raheem Sterling was dropped after a difficult evening as a ‘false nine’ in the 2-0 defeat by Paris St Germain on Tuesday. 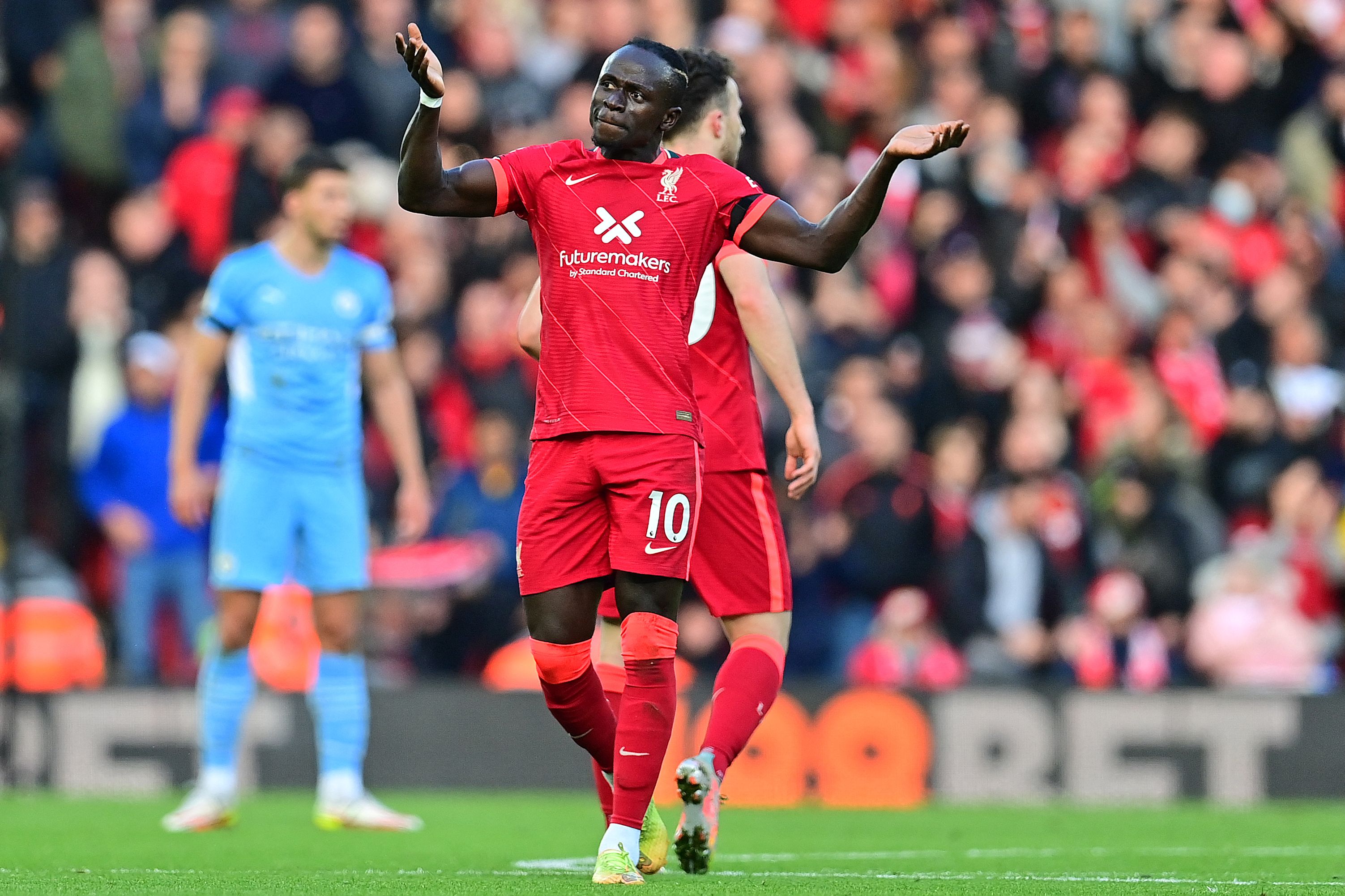 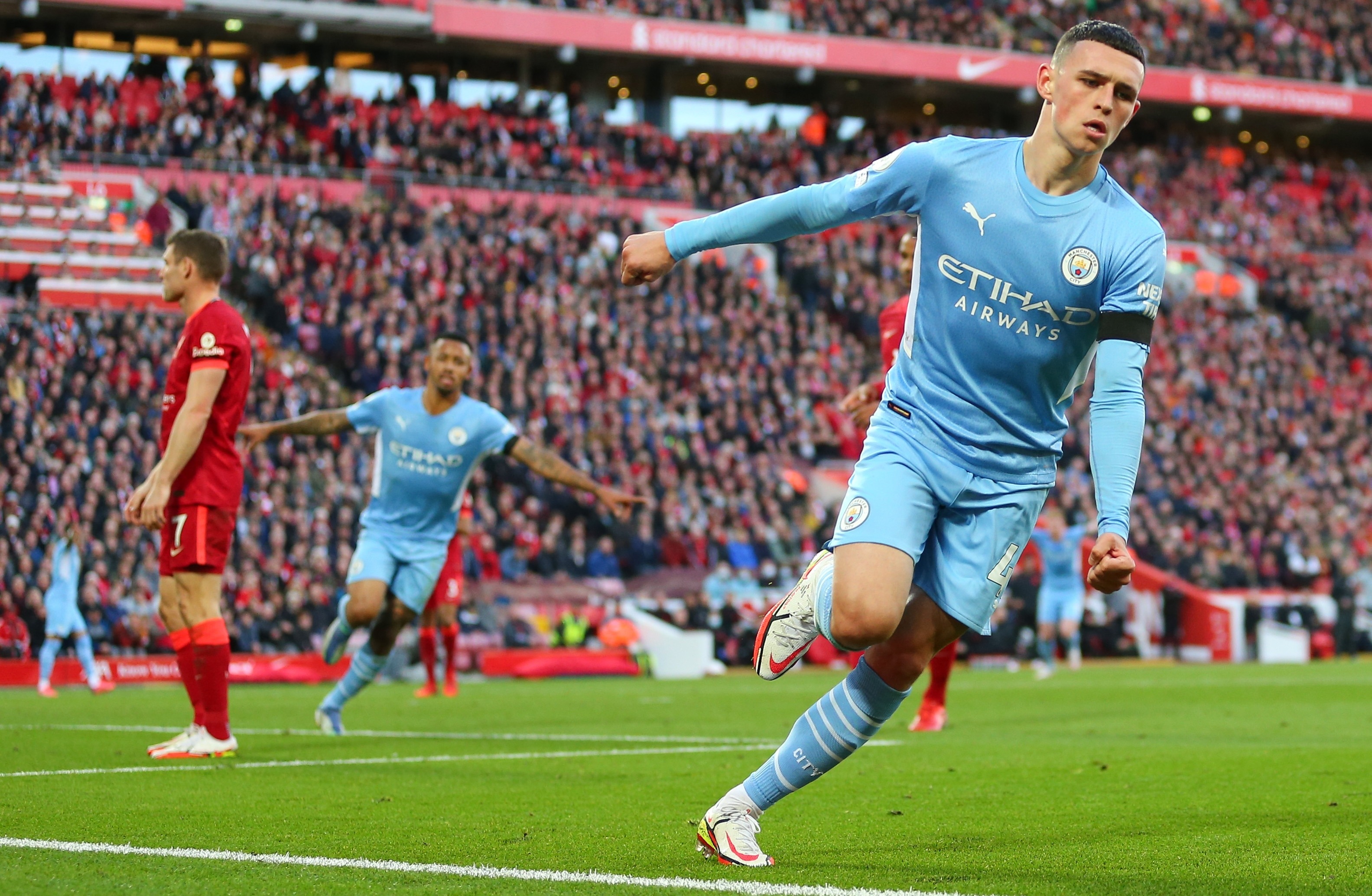 The opening 20 minutes was standoffish – with a little too much mutual respect and no clear chances.

But then Bernardo Silva did a passable impersonation of Diego Maradona in the Azteca in 1986 as he scurried past the majority of the Liverpool team and fed Phil Foden, whose angled shot was thwarted by Allison.

Joao Cancelo soon slipped one through for Kevin De Bruyne, who shot wide across goal – and Klopp was looking agitated, demanding that his men show greater intent.

Liverpool were tepid, timid and were lacking the dynamism of their injured right-back Trent Alexander-Arnold.

James Milner, deputising for the England man, was lucky not to concede a penalty when he barged over Foden on the edge of the box, ref Paul Tierney bizarrely failing to award either a free-kick or a spot-kick.

Then Foden centred to present De Bruyne with a free header at the back stick, but the Belgian was off-target with his diving effort.

Liverpool could barely get the ball from the champions – but just as in Paris on Tuesday, City were dominating, yet failing to find a breakthrough.

The first time City’s goal was threatened, it was of their own doing – dodgy Ruben Dias back-pass almost catching Ederson by surprise.

Milner, looking all of his 35 years, was booked for a cynical foul after being outfoxed on Foden, but the victim wasted the free-kick.

When Ederson produced one of his masterful long-range passes, Foden beat Milner again and Allison had to come off his line to snuff out the danger with a defender’s tackle.

Klopp appeared to have inserted a few rockets up backsides at the break and Diogo Jota’s shot on the turn soon forced Ederson into his first real save.

And then after 58 minutes, the vast majority of which had seen City in command, Mo Salah kippered Cancelo – who was on a booking – raced forward and slipped in Mane, who finished with precision.

Sterling replaced Grealish soon after, greeted by the usual ‘greedy b*****d’ chants from the moral high ground of The Kop.

And just one it appeared that City would be made to pay for their wastefulness, Jesus cut inside from the right with a skipping run and angled a pass for Foden, who tucked his finish

Milner – who seems to have nice-guy immunity from referees – chopped down Bernardo and somehow escaped a second yellow.

Guardiola exploded in rage when another dodgy decision went Liverpool’s way soon after, gesticulating wildly at fourth official Mike Dean and ripping off his jacket.

His mood worsened when Salah scored his gem, twisting and turning past five City players and drilling home, in off the far post.

Guardiola was yellow-carded by Tierney and Milner was then substituted by Klopp – to prevent a card and, perhaps, to wind up the City boss still further.

But then De Bruyne stepped forward to restore calm for the champions.

The Belgian had been having a frustrating match but the permanence of class told as he fed Foden, whose cut back evaded Kyle Walker and fell to De Bruyne who finished with an emphatic curling finish.

There was a scare for City when Ederson failed to collect a free-kick but Rodri’s outstanding tackle denied Fabinho what had looked like a tap-in.