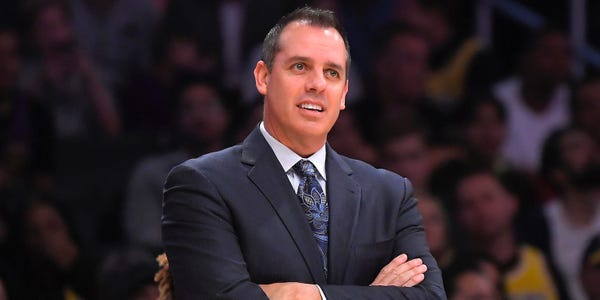 Frank Vogel was not the Los Angeles Lakers' first choice for head coach, but he was the perfect man for the job.

Vogel helped lead the Lakers to the championship, no small feat given the 2019-20 season's turbulence. For the Lakers, that included the Daryl Morey-China preseason controversy, Kobe Bryant's tragic death, the pandemic, and then the bubble.

While the Lakers were led by LeBron James and Anthony Davis, the best superstar pairing in the NBA, and a rock-solid defense, even Lakers players believe their roster wouldn't have worked without Vogel's leadership.

"If Frank Vogel wasn't the coach, I don't know if it would have worked," veteran Lakers forward Jared Dudley said on Bill Simmons' podcast. "I don't know if he gets enough credit."

Dudley said Vogel's scouting reports were the best he's seen in his 13 seasons in the NBA.

"The preparation we had was phenomenal," Dudley said. "The best I've had in the league, and I've been with great coaches."

"I just thought the preparation was top-tier."

Dudley said while facing the Portland Trail Blazers in the first round of the playoffs, the Lakers players got such detailed scouting reports that James actually applauded the report.

"You don't see that too often, how thorough they were."

Vogel got LeBron to buy-in right away

The Lakers' first choice for head coach was Tyronn Lue, the Cleveland Cavaliers' head coach when they won the 2016 championship. However, they lost out on Lue when they reportedly low-balled him on money and contract length.

After interviewing Monty Williams, who took the Phoenix Suns coaching staff, the Lakers hired Vogel. They named Jason Kidd, who also interviewed for the head-coaching job and reportedly impressed, as the lead assistant, leaving many to believe Vogel would have Kidd breathing down his neck.

Such circumstances wouldn't necessarily lead to a productive start for a new head coach, but Vogel landed on his feet, thanks, in part, to James's buy-in.

According to ESPN's Zach Lowe, James and the team practiced hard during training camp, going through drills at full-speed, diving on the floor for loose balls, and competing with one another. James was motivated, and whether it was from missing the playoffs in 2018-19, or perhaps from acquiring Davis in the offseason, he followed Vogel's order.

According to Lowe, Vogel was not afraid to call out James in film sessions, and James would accept it and correct it on the floor.

Such buy-in has a ripple effect on teammates. Vogel, a coach known for his defensive principles, had everyone on the team focused and excited about the defense.

Vogel was on Lowe's podcast "The Lowe Post" and spoke about coaching his way instead of appeasing anyone on the team.

"My family, having moved around a lot, and this being my third head-coaching job, I really just wanted to go for it. I wanted to lay it all out there and be unafraid and really coach my way. Because a lot of times, you get coaching jobs in the NBA, and you want to bend to appease your front office, you're going to bend to appease your players. Sometimes you don't always get to coach your way for various reasons — you want the job security, you want to not have to move your family, all these types of things. My family and I had been through a lot, so I was going to do it my way and live with the results."