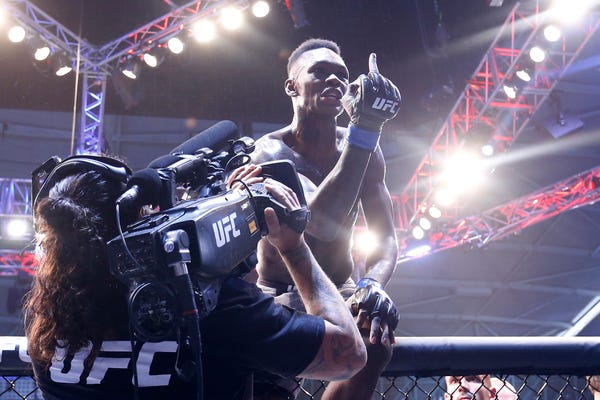 FIGHT ISLAND — Paulo Costa is "already dead" and so the UFC middleweight champion Israel Adesanya should move on to a super-fight with Jon Jones, who would be the perfect foil, former UFC champion Dan Cormier said.

Adesanya only made his UFC debut in 2018 following a flawless knockout run in MMA organizations in New Zealand, Australia, and China.

In the two years since joining the world's leading fight firm, Adesanya rocketed up the UFC rankings, scalping Anderson Silva, Kelvin Gastelum, and Robert Whittaker to claim the 185-pound title in 2019.

His meteoric rise and elite striking has drawn comparisons to Conor McGregor, but Adesanya continues to win UFC title fights beating Yoel Romero and Costa in 2020.

It was a fight the Nigerian-born New Zealander dominated as he cut Costa, ground-and-pound him on the floor, and then pretended to hump him after his knockout win.

Following the win, Adesanya continued to belittle Costa on MMA Fighting, saying that his second round finish was this year's version of McGregor's 13-second victory over Jose Aldo in 2015.

And as McGregor has never seen Aldo again, neither should he see Costa again.

For the former two-weight UFC champion Cormier, who is now a UFC commentator, Adesanya should leave Costa alone and direct his energy elsewhere.

"What he did to Paulo Costa — Paulo Costa's still delusional," said Cormier during a media day Tuesday involving UFC talent.

"After what happened a couple of weeks ago, there's no contract coming. Just go fight somebody and go take it. But then I'm like, Izzy, leave him alone.

"You keep picking on Paulo Costa, he's dead. Paulo Costa's dead. You keep putting pictures on the internet of the guy? Kicking him when he's down? It's a different world these guys are operating in today man.

"Usually you win and you move on but … I started feeling bad for Paulo Costa, and then when he started responding, it actually got worse."

Jones would be the perfect foil for Adesanya, according to Cormier

A bout involving Adesanya and Jones would bring together two of the best MMA fighters in the world today, the dominant middleweight king, and the former long-reigning light heavyweight champion in Jones.

Adesanya even said earlier this month to MMA Junkie that the fight would be "the biggest" in the history of the UFC, with the 185-pounder already making it personal by talking about Jones' dead mother.

Cormier told reporters at the UFC's Fight Island bubble this week that the spice has added another dimension to the bout, with Jones getting increasingly irate at Adesanya's antics.

"If you're Israel Adesanya you just don't fight him, because you know how mad he is," Cormier said.

"Could you imagine making this man as mad as you're making him and still not fighting him? Because it doesn't seem Izzy's ready to fight him right now, but I think it would be a fantastic fight.

"Jones wants to fight him. Jones is a fighter, man. He'll fight anybody. He'll fight Adesanya, but Izzy won't even fight him, which is just like picking at somebody constantly but at a distance.

"I'm not saying Adesanya's scared, but Adesanya says, 'I need my time. You [Jones] said you're going to heavyweight 10 years ago; you're finally doing it now. Why can't I have time?'

"It's very fascinating watching these two interact with each other. It's nasty. But these rivalries tend to get nasty."

Cormier added: "I hope they fight at some point. I think it's a very interesting matchup. Adesanya's improving.

"If I'm Jones I fight him sooner than later if I can get him in there, because the longer – remember, this guy's only been here for a couple years. Now he looks like he's going to hold the belt forever."