CRADLING the glittering silver trophy on a sunny summer’s day on Centre Court, Peng Shuai basked in her moment of triumph.

The Chinese tennis superstar was a women’s doubles winner at Wimbledon and garlanded by a 1.4 billion-strong population back home as a national treasure. 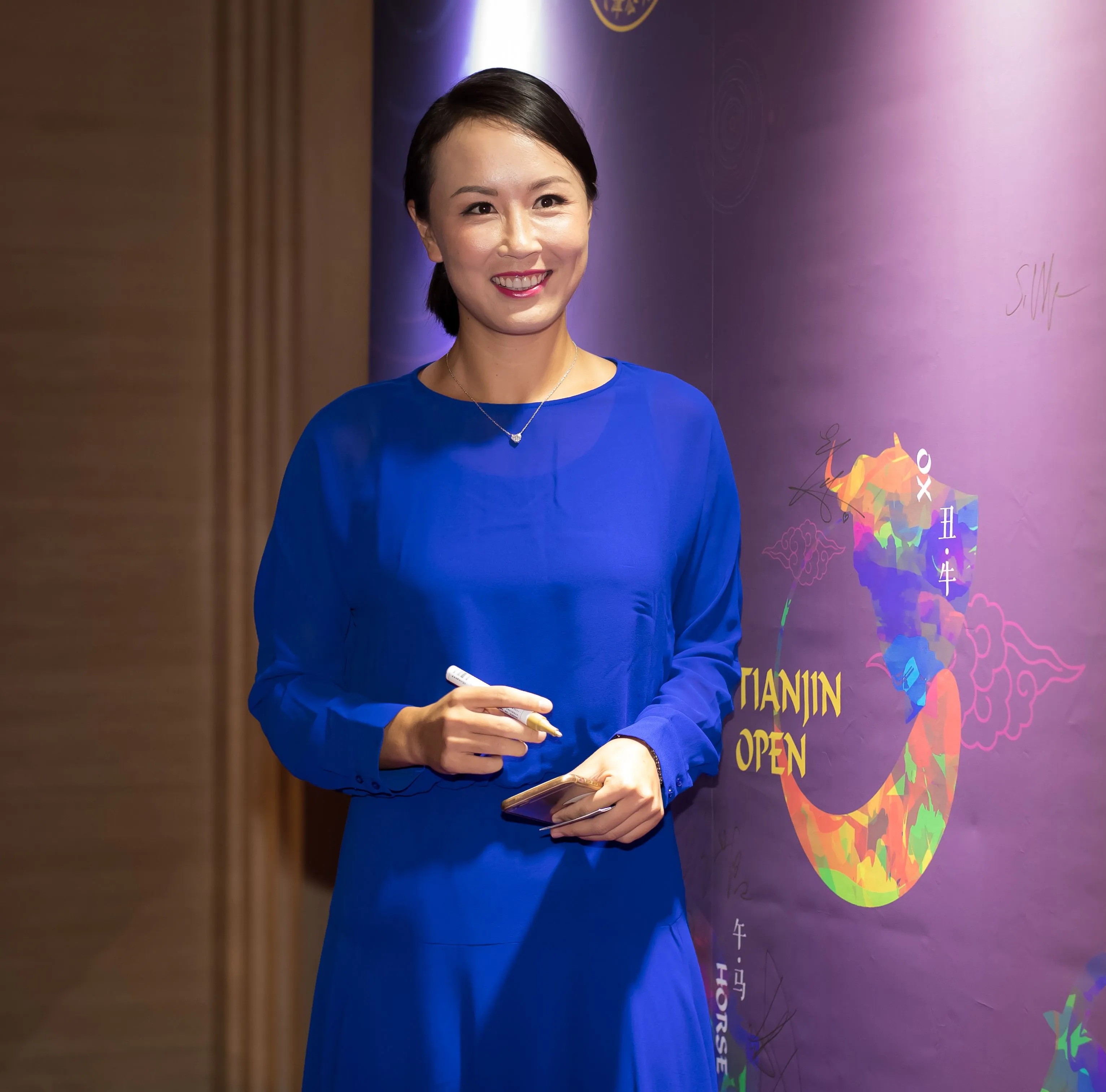 And as the world top-ranked doubles player and the women’s singles No 14, she had the world at her feet while counting the game’s elite among her network of close friends.

But eight years later, the popular and established 35-year-old star of the women’s game has vanished — and has failed to return calls from anxious pals for two weeks.

Peng’s disappearance coincided with a deeply disturbing social media post in which she claimed to have been sexually assaulted by one of China’s most powerful politicians.

And yesterday concerns for the player grew further, after she appeared to release a statement retracting her claims, which is feared to have been written for her, or under duress.

The email said to be from Peng was released on Wednesday by China’s state-controlled CGTN broadcaster.

It read: “Hello everyone this is Peng Shuai. The allegation of sexual assault is not true.

“I’m not missing, nor am I unsafe. I’ve just been resting at home and everything is fine. Thank you again for caring about me.

But social media experts raised doubts about the message, pointing out that a cursor can be seen in the text, suggesting it was screenshot and sent by a third party.

Steve Simon, head of the Women’s Tennis Association, said the message “only raises my concerns as to her safety and whereabouts”.

He added: “I have a hard time believing that Peng Shuai actually wrote the email or believes what is being attributed to her.

“Peng Shuai displayed incredible courage in describing an allegation of sexual assault against a former top official in the Chinese government.

“The WTA and the rest of the world need independent and verifiable proof that she is safe.

"I have repeatedly tried to reach her via numerous forms of communication, to no avail.”

Mr Simon added that the sex attack claim must be investigated with “full transparency” and “without coercion or intimidation”.

And he warned that Chinese WTA events could come under threat if the mystery is not resolved.

That afternoon I was very afraid. I did not expect this to happen — someone helped guard outside because nobody would believe that a wife would allow this.

She has not been heard from since posting an incendiary message on Chinese social media site Weibo accusing Communist Party bigwig Zhang Gaoli of coercing her into sex.

The November 2 post included the chilling claim that all-powerful Politburo member Zhang — 40 years her senior — forced himself on her while his wife stood guard at the door.

Peng admitted she had previously been the retired state supremo’s mistress from 2011 until he dumped her the following year.

But she claims she was reluctant to resume the relationship when he approached her again in 2018 — and was persuaded to have sex against her will before resuming their affair, which is understood to have carried on until last month.

The 75-year-old father of two was said to have brought the tennis star to his room and demanded sex while his elderly wife Kang Jie — who Peng calls “Auntie” — watched the door.

Peng’s open letter to Zhang said: “I am a hypocrite. I admit I am not a good woman, and am in fact a very very bad woman. You asked Dr Liu . . .  to contact me, and asked me to play tennis with you at Kang Ming Hotel in Beijing.

“After we finished playing tennis, you and your wife Kang Jie brought me to your home, then you took me into your room.

"Like what happened ten years ago in Tianjin, you wanted to have sex with me.

“That afternoon I was very afraid. I did not expect this to happen — someone helped guard outside because nobody would believe that a wife would allow this.

It’s shocking that she’s missing, more so that it’s someone that I have seen on the tour in the previous years quite a few times.

“That afternoon I didn’t agree, and I kept crying. I had dinner with you and Auntie Kang Jie together.

“After dinner, I was still not willing to have sex. You said you hated me.

“You said in those seven years, you never forgot about me, and you will treat me well.

"I was terrified and anxious. Taking into consideration the affection I had for you seven years ago, I agreed . . .  yes, we had sex.

“Everything that has happened, I deserve it. I have brought everything upon myself.

“There were so many times when I thought, ‘Am I still a human?’ I thought I was a soulless creature, faking, faking every day, which one is the real me?

“For someone as prominent as yourself, I know you said you are not afraid

"But it doesn’t matter if I’m hitting a rock with an egg, or being a moth that flies towards the flame, I am telling the truth.

“I shouldn’t have come to this world, but I don’t have the courage to die.”

Peng said she was left traumatised after being dumped a second time. Describing their break-up last month, she said: “On the 30th (October), we argued very badly.

“You said on the afternoon on the 2nd (November), we would go to your home to slowly talk it out.

“Today at noon, you called to say you are busy, denied everything. Just like this, you disappeared again, just like seven years ago. You played with me, and dumped me.”

Censorship is never OK at any cost. I hope Peng Shuai and her family are safe and OK.

The first affair was said to have started in the coastal city of Tianjin, where Zhang was party chief, but ended when he was promoted to the elite standing committee of the party’s political bureau in 2012.

Zhang, who is now retired, became a vice-premier in Beijing the next spring when current president Xi Jinping took office.

The harrowing post from Peng — who also won the French Open doubles in 2014 and was a singles semi-finalist at the US Open in 2014 — appeared online for just 20 minutes before it was removed by moderators, but it has sent shockwaves through the tennis world.

On Monday, 20-times Grand Slam winner Novak Djokovic said he was “shocked” by his friend’s plight.

He added: “I don’t have much information about it. Honestly, it’s shocking that she’s missing, more so that it’s someone that I have seen on the tour in the previous years quite a few times.

“It’s not much more to say than I hope that she will be found, that she’s OK. It’s just terrible.

“I can imagine just how her family feels that she’s missing.”

Women’s world No1 Naomi Osaka tweeted, with the hashtag #WhereisPengShuai: “A fellow tennis player has gone missing shortly after revealing that she has been sexually abused.

“Censorship is never OK at any cost. I hope Peng Shuai and her family are safe and OK.

“I’m in shock of the current situation, and I’m sending love and light her way.

Hoping that Peng Shuai is found safe and that her accusations are fully investigated.

Billie Jean King, 77, added: “Hoping that Peng Shuai is found safe and that her accusations are fully investigated.”

Peng is not the first Chinese star to vanish after apparently falling foul of her nation’s ruthless rulers.

X-Men actress Fan Bingbing, 40, disappeared for three months in 2018 after a row with Chinese authorities over tax.

The Hollywood star — China’s richest performer — resurfaced after paying £98million to the authorities and issued a grovelling apology on social media.

Her disappearance sparked fears for her safety amid reports she was being held in “secret detention”.

But in a post to 62million fans on her Weibo account, she said: “I’ve been suffering unprecedented pain recently. I’m so ashamed of what I’ve done — I sincerely apologise to everyone.”

She also grovelled to the Chinese Communist Party: “Without the good policies of the party, and without the love of the people, there would be no Fan Bingbing.” 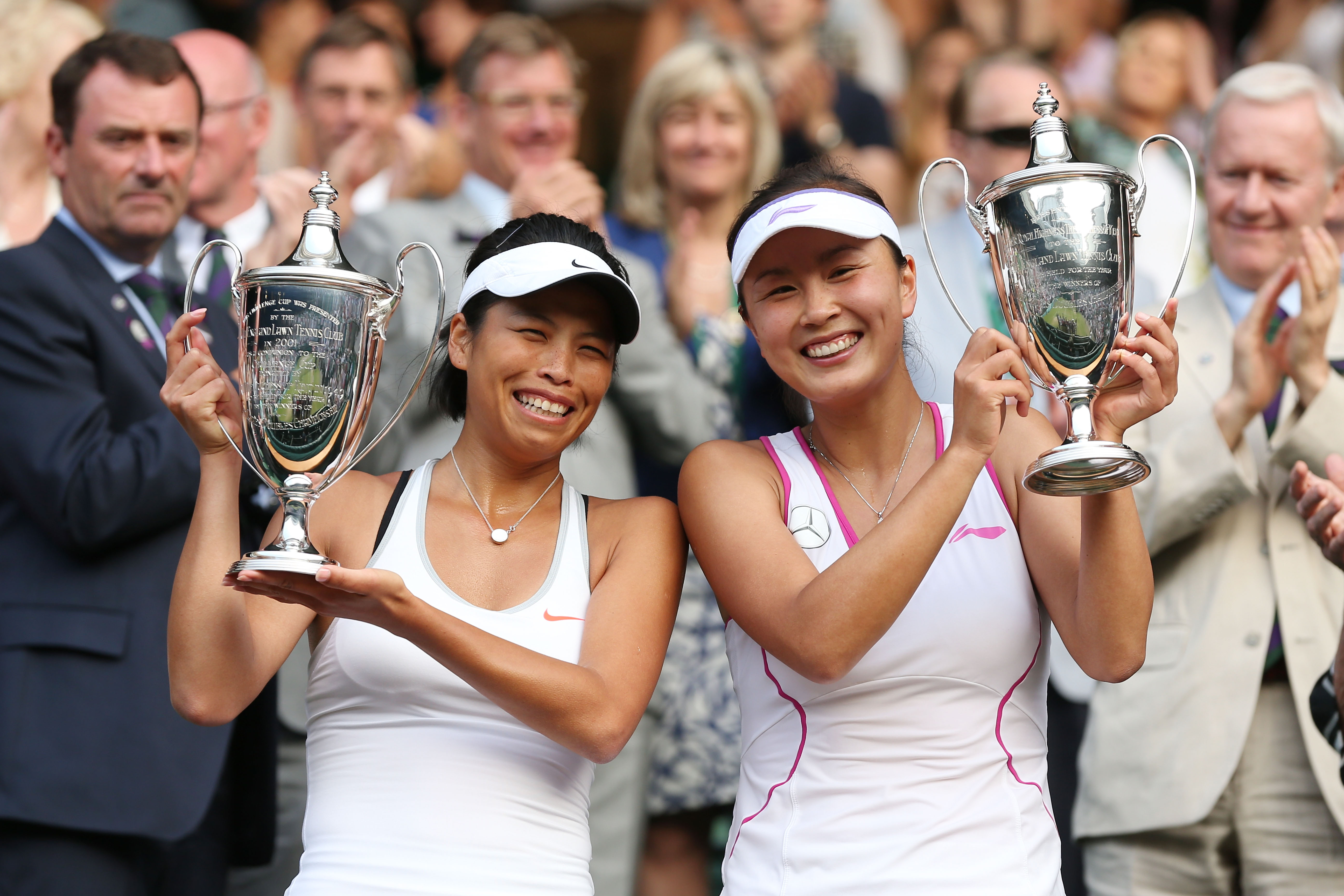 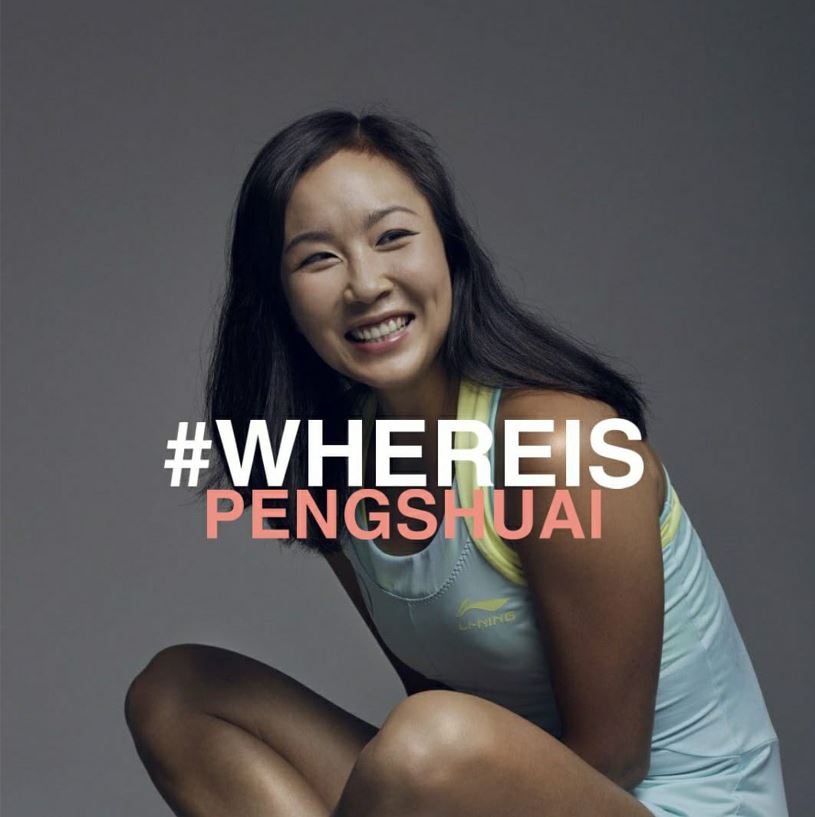 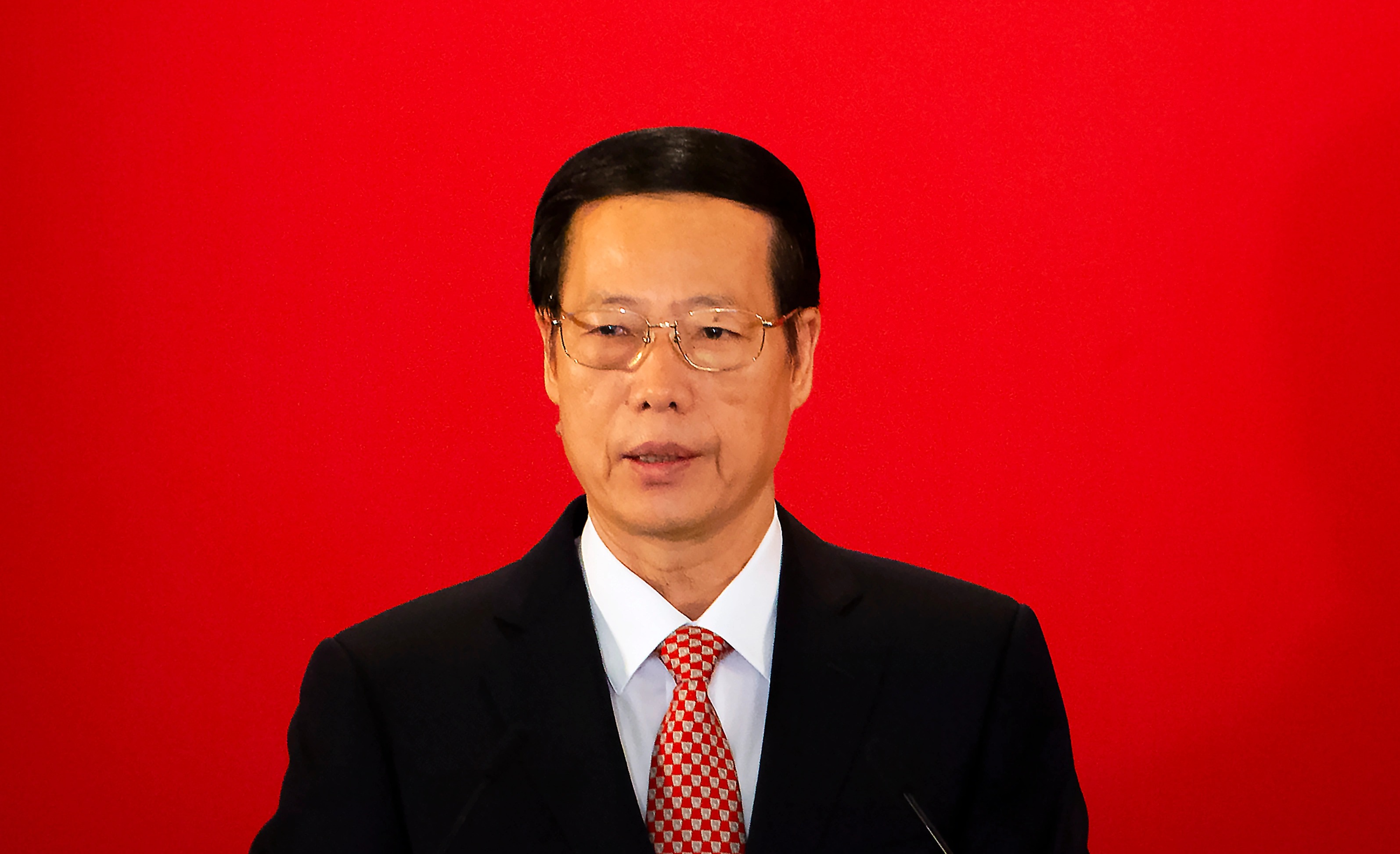