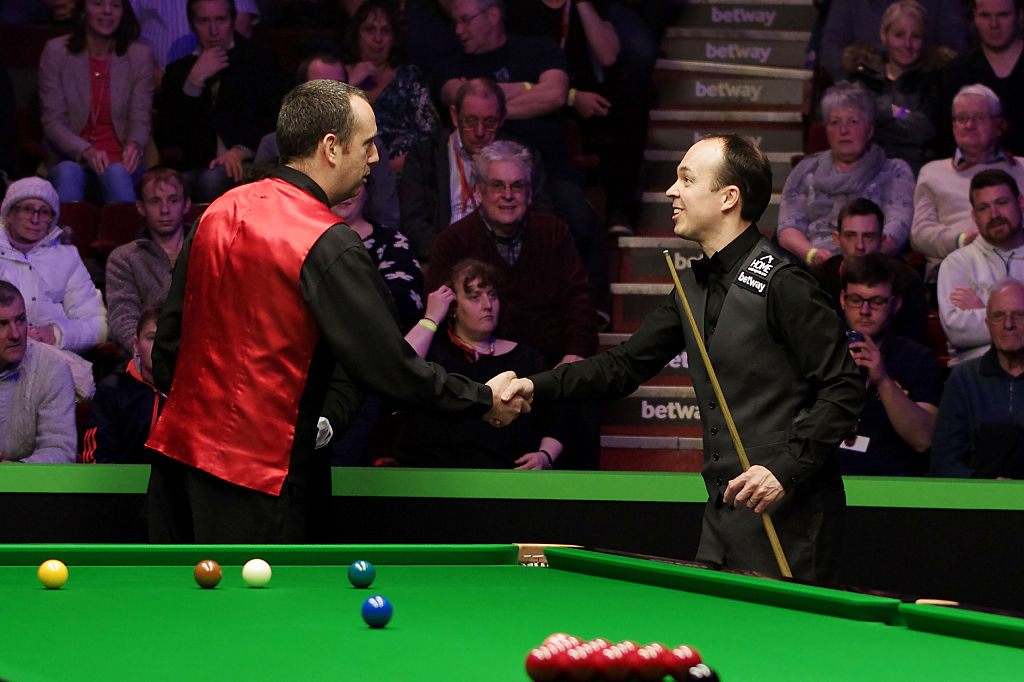 Rarely does a Ronnie O’Sullivan interview go by without some feathers being ruffled and there was plenty of plumage put out of place when he recently described a snooker career as ‘a waste of a life’ for most players.

It is fair to say that you have to take most of the Rocket’s musings with a pinch of salt, and sometimes with a big old sack of it, but he was pretty clear in his statement.

Speaking to The Disruptive Entrepreneur podcast, O’Sullivan said: ‘I always say to young kids, their parents, “Don’t let them play.” My own kids, I say, “You’re not playing snooker.”

‘If they decide to play snooker they’re on their own, I’m not supporting that.

‘It’s a bad sport, it can cause you a lot of damage. Unless you’re Stephen Hendry, Steve Davis, John Higgins, Mark Williams, me, Judd Trump, [Mark] Selby, [Neil] Robertson…forget it. The others, it’s just a waste of a life.’

The comments weren’t especially well received by other members of the snooker community, even the ones who the Rocket placed in the select group who hadn’t wasted their lives on the baize.

Three-time world champion Mark Williams tweeted in response to the comments: ‘And we wonder why there’s no youngsters coming through.’

‘In the bar at 11 or 12 at night, I’m mopping the bar floor thinking, “I f***ing hate doing this,” but that’s my inspiration to get on the practice table an hour earlier the next day because I don’t want to be doing that forever, I want to be playing snooker.

‘We’re all trying to get somewhere in snooker, we’ve all got the same long-term goals and we’re putting the hours in. No one will expect to be as good as Ronnie, I don’t think there ever will be someone as good or as talented as him, but if we can get somewhere, compete for titles, make a good living out of the game then there’s a lot worse things we could be doing.

‘With every job there’s ups and downs but doing what we all love and worked so long for, he should be respecting that.’

Michael Holt has been on tour since the ’90s, winning his first ranking title at the 2020 Shoot Out and he is hugely grateful for the lifestyle that snooker has afforded him.

‘Life is about contentment, no matter what you do,’ the Hitman told Metro.co.uk. ‘If somebody wants to play snooker and chase their dream, that’s what they should do.

‘Is it Charles Bukowski that said, “Find what you love and do it till it kills you”? If that’s what people want to do then good on ’em. People can be content doing that and they’re winning in that case.

‘I can only talk about my journey, I’ve not had the success Ronnie has, obviously. but what the game has given me: I’m not working for a living, doing a proper job like my missus who’s a solicitor.

‘I’ve earned a living for over 20 years, I’ve got two young kids now and it gives me the opportunity to spend time with them. I don’t have to commute somewhere at 6.30am and miss all those bits. I can spend so much time with my family, which is a privilege, I’m blessed.

‘It’s important for them as much as it is selfishly good for me. I’m indebted to snooker for that, for giving me that opportunity.’

Like any professional sport it is not all lifting trophies and drinking in applause, snooker is a fiendishly difficult game and one that takes countless hours of lonely dedication to excel at, but those hours are sacrifices that players are, generally, happy to make.

‘Of course being a snooker player is horrible at times, I’ve been through it,’ added Holt. ‘You lose, you’re trying to improve, you struggle, it’s hard.

‘That’s just part of the sport though, or any sport, if you can’t cope with that then don’t play, you’re on a hiding to nothing.’

A man who has been a pro even longer than Holt is Fergal O’Brien, who joined the tour way back in 1991 and has been an ever-present since then.

He has one ranking title to his name in those 30 years and would not swap any other career for the one he chose.

‘Playing snooker for 30 years, if you gave me the choice of doing anything in the world I’d still pick playing snooker,’ O’Brien told the Snooker Scene Podcast.

‘It has its bad days, its dark days, but a bad day playing snooker or being a professional snooker player is still certainly better for me than doing something else.

‘At some stage that may change, but that love of the game…I’m grateful to be able to play and have the opportunity.’

It is not just players that wouldn’t trade snooker for anything else, but those involved in the game without a cue in their hands.

Referee Monika Sułkowska works full-time as a project manager, but spends her holiday days officiating on the World Snooker Tour and wouldn’t have her free time spent any other way.

The Polish ref appeared on the Talking Snooker Podcast and was asked about the best part of being a referee, saying: ‘The best part of refereeing is an easy question, it’s that you get to be this close to the game you love. Nothing really beats that.

‘It’s just entering this wonderful world full of people that you want to spend more time with and who love snooker as much as you do, which is not that common, especially coming from where I did.

‘That was a whole new experience to me, that someone can talk, listen, watch snooker and be as passionate as what I am. It’s a strong connection and keeps us as a family together.’

It may have been that O’Sullivan was trying to get a reaction out of players, as he said he was trying to do when he said he’d ‘have to lose an arm and a leg to fall out of the top 50’ such is the lack of young talent in snooker.

Talking about those memorable comments from 2020, the Rocket said: ‘This is a sport that I love and I see a lot of talent out there getting wasted.

‘What worked for me was someone doubting me and I thought I’d prove them wrong. I was hoping that me saying what I said would hit a note.

‘I wouldn’t have said that 15 years ago, but I can get away with saying it, everyone’s going to laugh at it, bit of a joke, a bit serious, I can’t lose by anything I say in the snooker world. It’s said in a bit of fun but with a little dig there, in a nice way to get the best out of people.’

Grabbing that pinch of salt again, no way does the Rocket tell every parent he meets to stop their children playing snooker because he is setting up academies across Asia in a bid to bring forth new young stars of the game.

‘We have already got the facilities. It’s a 16,000-square feet space, O’Sullivan told The Sun in May of his new venture. ‘We are putting tables in there. We will have some professional coaches. We hope to roll it out all over Asia.

‘Ronnie O’Sullivan Snooker Academies with the long-term view to try and create an amateur scene.

‘Over there they are much more supportive of their amateurs and juniors and get excited over that. It is something I think will work.

‘The idea is to get the first one right, get it successful and then once that is going well, it will be easier to roll out the rest of them. China definitely is a massive part of the plan but the first one will start out in Singapore.’

Anthony Hamilton, another man who has been on tour for 30 years, expressed the love-hate relationship a snooker player has with the game in majestic terms when speaking to Metro.co.uk last year.

It’s a difficult way to earn a living, but the Sheriff wouldn’t have it any other way.

‘It’s not gone perfectly for me but I’ve got no regrets because I’ve enjoyed it,’ said Hamilton of his career.

‘I’ve been in the top 10, top 16, 12 Crucible appearances and a few finals here and there. Also, just a lot of hard match snooker that you don’t see on the TV. A lot of my favourite matches have been untelevised in some sports hall round the corner.

‘World Championship losses and wins, things that haven’t been seen but will live with my till my last breath. That’s why I play snooker, for the competition. It’s for the good and bad memories, some of the bad memories are my favourite ones.

‘Some of my favourite memories are losses because the match itself was just amazing, both players at the top of their game and someone just has to come out on the wrong end of it.

‘There’s nowhere to hide, that’s why we love and hate snooker. It’s really medieval. Over the years I used to dislike a lot of snooker players but now I think they’re a dying breed of sportsperson, I think they’re really cool.

‘They work hard for not the most amazing prize money. It’s alright, better than a lot of jobs. But they work hard at a game that really doesn’t give you a lot of enjoyment.

‘It’s a tortuous thing to do and every single time they go to a tournament, all but one player comes away pissed off and you do that for 30 years. There’s no glamour, if you’re in the sport for that, you’re in the wrong sport. That’s why a lot of players don’t last that long, they get to a point and think it’s not enough.’

‘Yeah I do [love it], I do actually, I try and tell myself sometimes I don’t, but I do love the game. There’s nothing more humbling than playing this game, the game always wins, it’s so hard,’ concluded Hamilton.

‘That’s why we revere Ronnie [O’Sullivan] so much, because he makes this game look so easy.’

While the Rocket sees wasted lives, many others see quite the opposite.