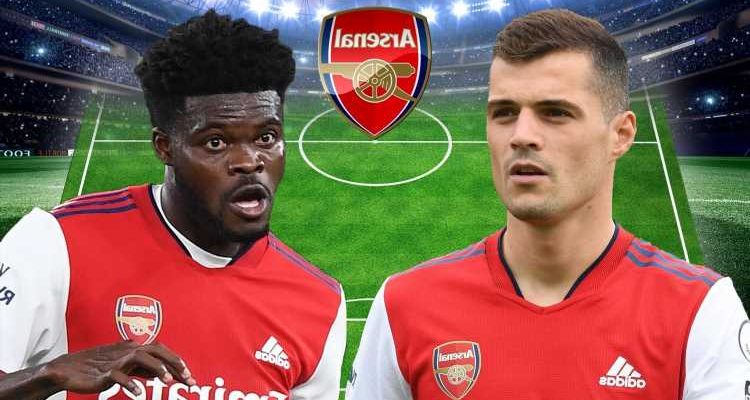 ARSENAL boast a fully-fit squad ahead of their North London derby clash with Tottenham, Mikel Arteta has confirmed.

The Gunners go into Sunday afternoon's 4.30pm kick-off on the back of three straight victories in all competitions following their horror start to the season. 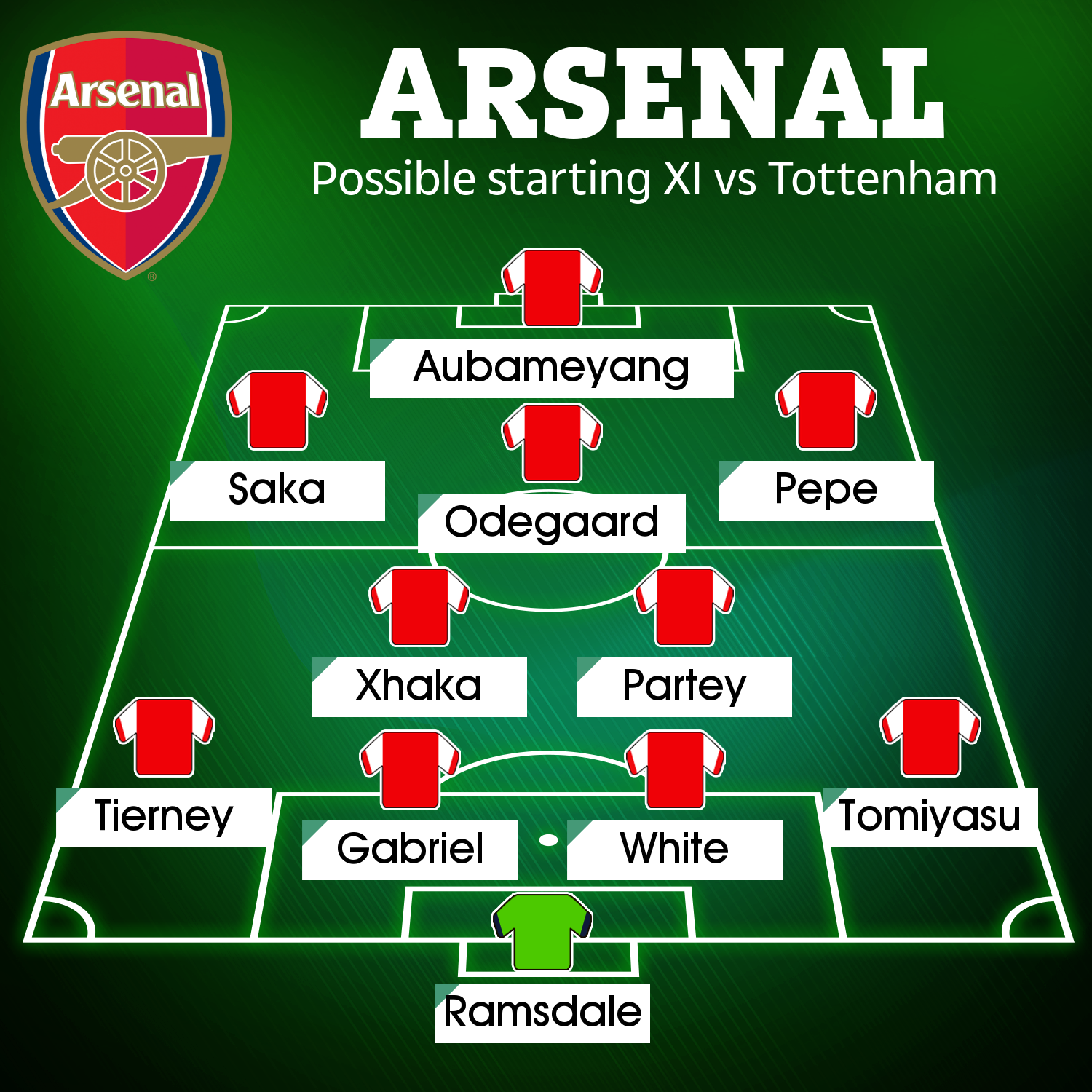 And Arteta has the luxury of fielding his strongest possible XI for the visit of Spurs.

Granit Xhaka has served his three-match suspension and recovered from coronavirus while Thomas Partey played an hour of the 3-0 Carabao Cup win over AFC Wimbledon.

Kieran Tierney is also fit to play having appeared in some discomfort during last weekend's 1-0 win over Burnley.

Ahead of the North London derby, Arteta confirmed: "Hopefully everyone is available, so good news.

"We have one more session before the game, but in general everyone is feeling good. It's good. Let's continue like this."

On Partey and Xhaka's availability, Arteta continued: "They are in the best possible state that they can be.

"Obviously, they've both had different issues in the last few weeks – Thomas with a big injury and Granit with a suspension.

"Ideally, you want players with more of a run of games and to be a little bit more consistent in terms of minutes, but they are both available.

"[Xhaka] came back and he was fine because he really looks after himself.

"He was training and as he always is, he gives you the maximum and the best possible attitude to compete and win matches."

However, Arteta refused to give anything away as to the identity of his goalkeeper, with Bernd Leno and Aaron Ramsdale competing for minutes.

Ramsdale, the £30million summer signing, has been preferred in the Premier League lately, with Leno's future in doubt.

But when asked who'd start against Tottenham, Arteta joked: "Well done for trying!

"You will see the line up on Sunday. As you can understand, we cannot give anything away." 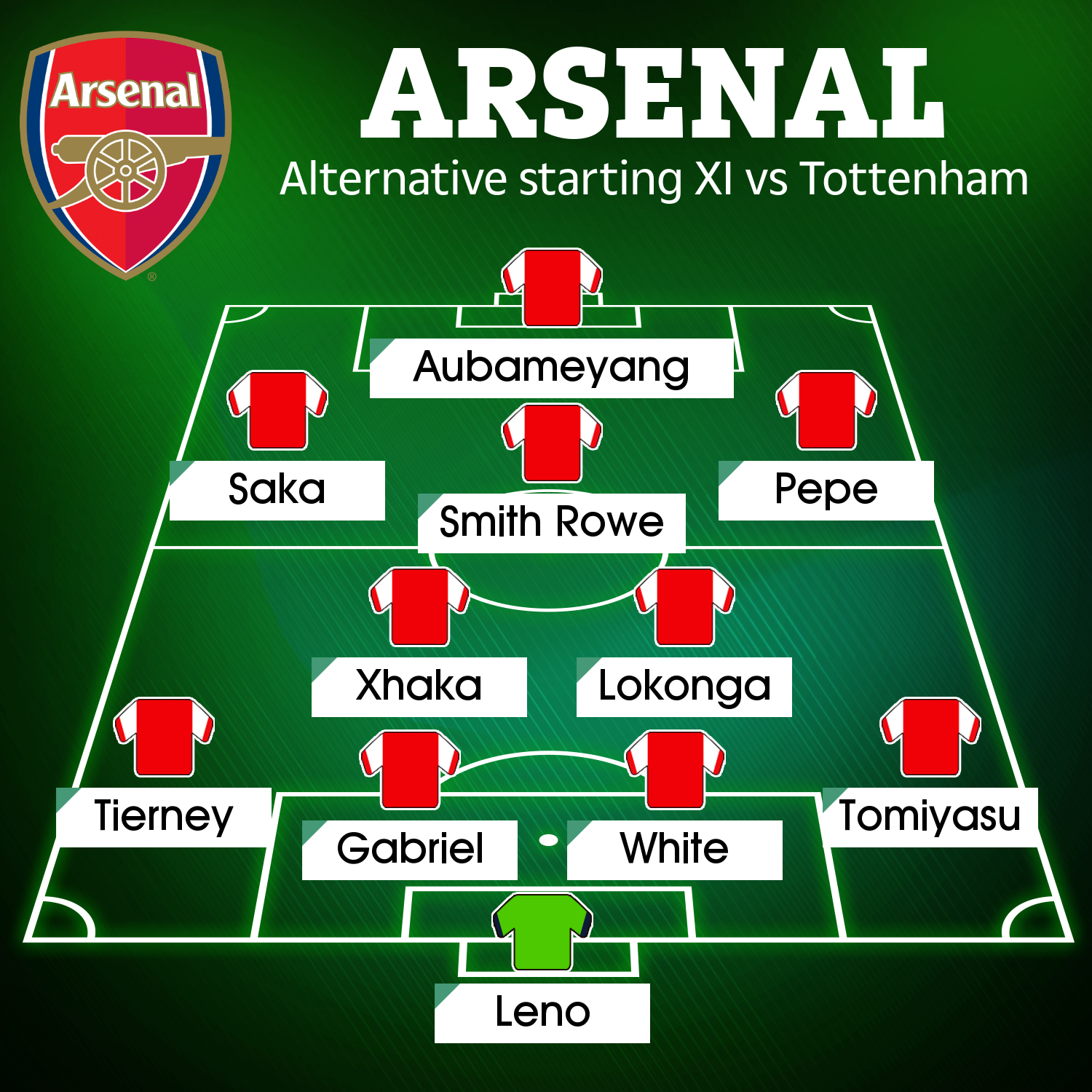 Arteta was similarly tight-lipped as to whether Alexandre Lacazette would retain his place having started the win over AFC Wimbledon.

The boss claimed: "Everybody has a chance. We will not reveal what we will do in terms of the line up.

"But obviously there are a few positions we are addressing and will try to make the right decisions."

But Arteta did hint goal-shy captain Pierre-Emerick Aubameyang would be given the nod.

When asked about his skipper, the Spaniard hinted: "You need a special moment and details often decide these types of fixtures.

"When big players step in and are able to do that for the team, the outcome normally becomes really positive."

One player almost certain to start is Takehiro Tomiyasu after his red-hot start to life at the Emirates.

When asked about the Japan star's recent form, Arteta gushed: "Well, I'm impressed… the performance as well the way he has settled.

"The way he has gained everybody's appreciation, the way he is… he had no time to prepare against Norwich and then a proper Premier League traditional game against Burnley in which I think he was exceptional.

"He had to go through some difficult moments because they really tested you and I think he did that with pride.

"The way he is, he's always fully committed and focused."

Arteta concluded by talking up the importance of the game, but revealed his side's current run of form gives him confidence.

The Gunners chief said: "It is the most special game of the season at home, for sure.

"It is a North London derby and emotionally it is a different one to play, as we know how much it means for our supporters as well.

"There is a certain level of confidence when you are on a winning run that is really positive to face a big match.

"We are playing at home, we will have our people behind us and they will create an incredible climate that you have to be able to enjoy and make the most of it."