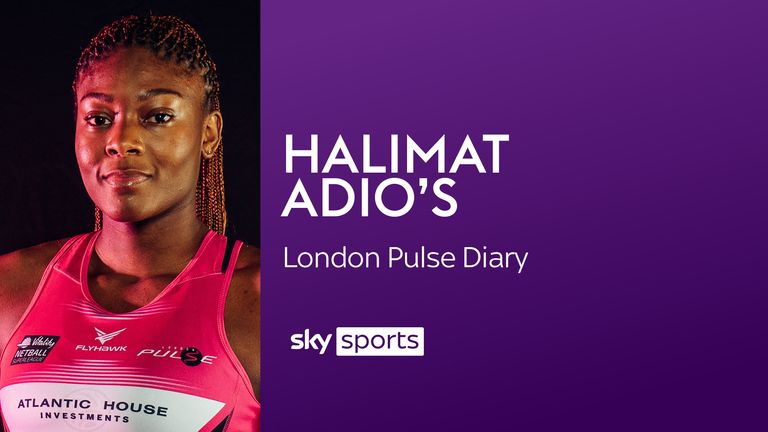 London Pulse’s Halimat Adio takes us inside the life of a Vitality Superleague player with the first installment of this year’s player’s diary. Up for discussion – training in lockdown, staying entertained on long coach journeys, and solving Pulse’s slow start…

For those of you who don’t know me, I am Halimat Adio, co-captain for London Pulse, and I’m extremely excited to be writing this regular diary through the season.

Imagine – I’ve been asked to talk about myself, like I already don’t do that enough. At least this time it’s for you guys!

The biggest news in my life right now is that the Vitality Netball Superleague season has officially started.

Can you believe, after close to a year out, we are already in Round Five? This is definitely by far the most anticipated season ever. I can hands down say it hasn’t disappointed at all.

Massive shout out to Sky Sports for providing fans with a much-needed dose of netball – this season, it’s every single match! How amazing is that!!!

As you all know, a lot has been happening at London Pulse.

Pre-season was long, but the day we were able to take our training from online and back into our home at the Copper Box was a dream come true – on so many levels. At the simplest level, it’s very close to home for me! But most importantly, being able to walk into a real training venue felt like Christmas.

We have built resilience

We have grown in strength

We have learnt the power of connections

We announced our new kit sponsor, a great partnership because not only are Flyhawk a female-founded sportswear brand, but they are the netball brand.

We are very lucky to work with the most amazing head of S&C, Dan Lavipour, and he gave us a fantastic online programme when we were in lockdown but I will never underestimate training live with my netball family again.

The season started off in sunny Wakefield with all teams performing at Studio 001. Unfortunately, we haven’t been as successful in our first three matches against great competition.

Losing is extremely disappointing and difficult at times. Everyone’s always trying to figure out what went wrong, but what I love about this team is we all go back to the drawing board and think about how we can learn from our mistakes, improve together, and build partnerships.

There is so much of the season left and I’m beyond excited at what our team can achieve together.

👏🏾👏🏾👏🏾 Love this from @Pulse_Netball Can’t wait to see Jamal umpiring professional games in the future 😉🥳 https://t.co/1MfXrQy5QC

This year, the season is very different, as we have a centralised venue. The first half of the season is up in Wakefield which is miles away from London, and the journeys are long!

I know for a fact it’s going to be a very long season travelling up and down, although that means more time for a cheeky game of ‘Mafia’ on the coach (ask anyone, I’m the best at this game). But then for the second half of the season, we get to be home at the Copper Box – which we cannot wait for.

Another thing that is different this season is that we don’t actually have fans at the venue – this means we have to make our own noise and support each other from the bench and on court. It’s very important because it can get quiet out there sometimes.

Outside of London Pulse, I am also part of the England Netball Futures programme. In August, we started our training camps in preparation for the Cadbury Netball series. 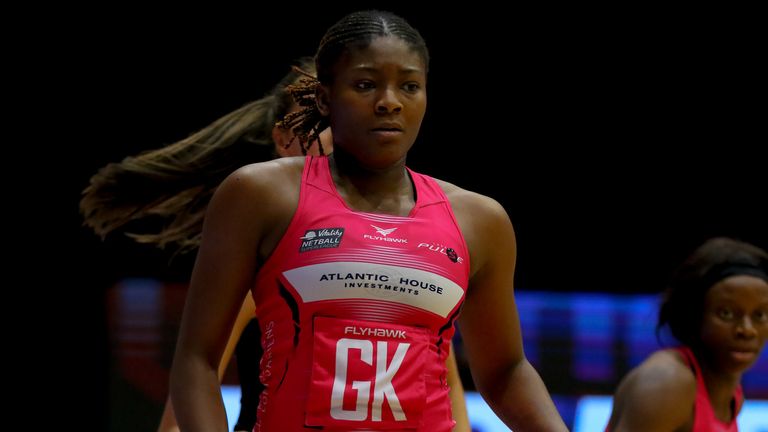 We were so lucky to be able to start training and playing even though we are in a global pandemic, and to top it off, I was selected in the squad.

That was my first senior tour and my first time in New Zealand. The experience out there is something I will always remember – just being able to be around the best athletes in the world and also learn from them.

National lockdown has obviously meant there is not much to report on outside of netball!

That said, I have loved being around my family because most of the time I’m either at university or netball (training and playing).

Having that five months or so downtime was very crucial. I did little bootcamps with my family and I also got to know more about my little sister, who is only 13. Also, during that period of time, I learned how to knit, crotchet, braid my own and family members’ hair, re-learn the keyboard, and I even became a ‘part-time’ pescatarian (emphasis on the part-time, because it didn’t last very long).

Anyway, that’s a quick round-up of life so far this season. I’m so looking forward to updating you all more as the season progresses.

Sky Sports is your home of netball. The Vitality Netball Superleague continues on March 12 with Round Five and two matches back-to-back on Sky Sports Mix and streamed live on the Sky Sports YouTube channel from 5pm.