England closed day one of the third Test on 224-4, galvanised by an unbroken 76-run stand between Ben Stokes and Ollie Pope, but it was young Zak Crawley who was their top-scorer.

Twenty-one year old Crawley, in only his third Test match, struck an accomplished 44 from 137 deliveries at the top of the order before ultimately perishing at leg gully off Anrich Nortje.

Former England opener Michael Atherton was impressed, especially after hearing Crawley speak to Sky Sports on his game after the day’s play.

“You sense there is a young man who is intelligent with the game,” said Atherton. “On how he played (Vernon) Philander – something didn’t quite work for him in the first innings [of the last Test], so he has made adjustments. “It’s not always easy to do that, to move around on the crease, because you lose your off stump, but it was interesting to hear his thought process.

“But he is very, very young in terms of his knowledge of the game and learning of the game; he is essentially learning on the job.

“You have to be understanding of that and, therefore, you have to give him time to develop.” 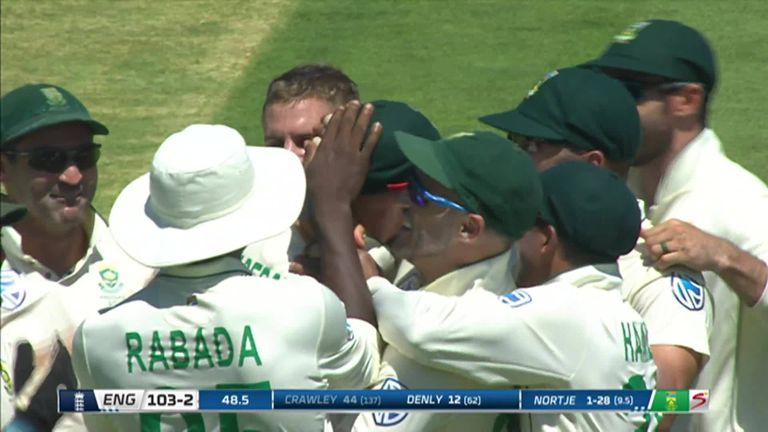 Former England team-mate and fellow Sky Sports pundit, Nasser Hussain, agreed with Atherton’s assessment, adding that Crawley looks like he has the ability to adapt to the rigours of Test cricket.

“Rob Key has seen a lot of him, and people say he is a quick learner,” added Hussain. “I think having watched him in two or three Test matches, we can say that now too.

“There’s the move across off-stump and now back to middle. Then, when they were bowling very straight to him, with the legside field, he went even more to the legside. He usually gets the hook and the pull shot away, but he couldn’t get that away today, so he put that back in the locker.

“He looks like someone who is willing to learn, and learn quickly.