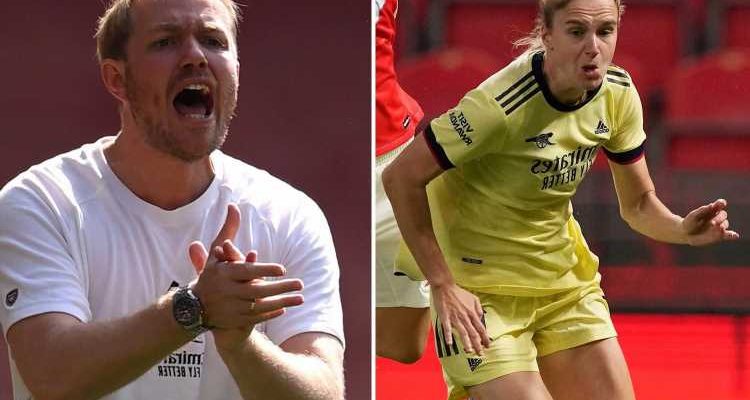 JONAS EIDEVALL hailed Vivianne Miedema’s 'incredible’ scoring feat after the striker notched up her 100th goal in an Arsenal shirt.

The Netherlands hotshot was on fire for the Gunners who thrashed Slavia Praha 4-0 to nab a place in the Women’s Champions League group stages.

And club boss Eidevall says the WSL star reached her remarkable tally in 97 starts for Arsenal without netting once from the penalty spot.

Eidevall told reporters: “To score that many goals in those games and without scoring a penalty, I just think the number speaks for itself.

“And she doesn't only score goals I think you would count assists in those games as well.

“I'm proud to be a small, small part of her career and I think the club should be very proud to have a player like that, so we're all very happy for her.

Miedema added: “It is a bit special and the girls have been really nice about it.

“I’m happy that I’ve reached that (number) but now we focus on our next game on Sunday."

A volleyed effort was among the strikes that helped Miedema get the scoring underway for the Gunners.

The WSL side were looking to seal a second-leg win away after beating their Czech opponents 3-0 last time out.

The forward, who scored 18 times in 22 WSL games last term, netted twice more inside the penalty area to grab a hat-trick as well as her century of goals.

And skipper Kim Little was on target from the penalty spot following a foul on Nikita Parris to round off an emphatic win for Arsenal who play Reading next.

Eidevall’s aces will join Chelsea as the only other English side in the next phase of the competition for Europe’s top women’s football sides.

Their victory comes a day after Manchester City were knocked out of the competition by Real Madrid.

And the draw for the 16-team group stage of the Women’s Champions League is set to take place on Monday.

Under their new boss, Arsenal are enjoying an impressive run of results winning all five games played in all competitions so far this term.

Following their clash with Reading the team face a home duel with title rivals Man City at Meadow Park.