Drake has become synonymous with the Toronto Raptors.

The popular rapper is known for smash hit singles like “Started from the Bottom” and “Back to Back,” but the NBA reportedly thinks Drake’s courtside behavior is “Too Much.”

During the Eastern Conference Finals, Drake was seen cheering his team’s victories from courtside. At one point in the series, Drake even massaged the shoulders of Raptors coach Nick Nurse.

He wound up Milwaukee Bucks coach Mike Budenholzer so much thatUSA Today reported Budenholzer to have said: “There’s boundaries and lines for a reason … the league is usually pretty good at being on top of stuff like that.”

Read more:Toronto Raptors fan Drake mercilessly trolled the Milwaukee Bucks by changing his Instagram photo to one of the owner’s daughter

With Game 1 of the NBA Finals between the Raptors and defending champion Golden State Warriors set to take place on Thursday, the league confirmed it had discussions with the Toronto side about its super fan and global ambassador, Drake.

According to ESPN,the NBA “spoke” to the Raptors because of his “activity and presence on the sideline.”

The conversation follows a warning the NBA gave Drake last year, when the Canadian had a confrontation with the former Cleveland Cavaliers player Kendrick Perkins.

But not everybody is opposed to Drake’s behavior. The Raptors players love it.

Earlier this week, Raptors forward Norman Powell said he likes having Drake on the sideline because he’s “a great supporter.”

He added: “It’s funny how his passion for the team’s really affecting the opponents, having opposing coaches come out … you can see it’s bothering them.” 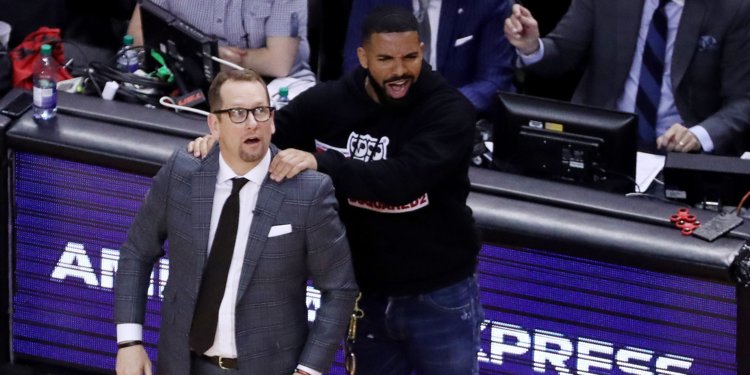 Even Warriors icon Steph Curry, who will likely see Drake up-close and personal during Game 1 at the Scotiabank Arena in Toronto, is unfazed, saying all he’s doing is “having fun.”

According to ESPN, Curry said: “It’s been entertaining. I know it’s a tricky situation with him being right there on the court, but at the end of the day, he’s having fun … you can’t hate on nobody having fun. Well, I guess in this life everybody hates on people having fun. So it’s par for the course on that one.”

One of the reasons Drake may be so excitable on the sideline is because this may finally be the year that the internet stops talking about the so-called Drake curse.

There’sa wild theory that the popular Canadian rapper is unlucky when it comes to sports. And it’s a theory that went viral earlier this year, whenthe Italian soccer team AS Roma banned its players from fraternizing with Drake.