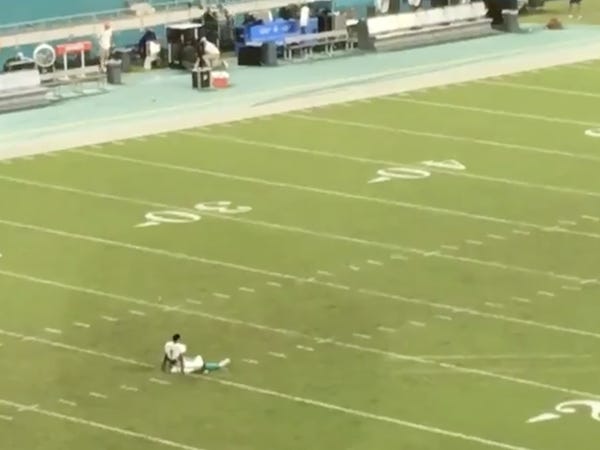 Miami Dolphins rookie quarterback Tua Tagovailoa made his NFL debut on Sunday in garbage time against the New York Jets.

With the Dolphins holding a 24-0 lead over the Jets in the final minutes of regulation, Tagovailoa entered the game for starter Ryan Fitzpatrick to take his first snap as an NFL player.

Tagovailoa's time on the field wasn't all that eventful — he handed the ball off three times and completed his two throws for nine passing yards — before the final seconds of the game ticked away.

But after the game, Tagovailoa returned to the field, sitting alone to take in the moment. ESPN reporter Cameron Wolfe captured the emotional scene.

After the game, Tagovailoa told reporters that he had gone back out on the field to FaceTime with his parents, who couldn't attend the game in person.

While Tua's parents couldn't be with him for his first snaps as an NFL quarterback, they still got to share a special moment with their son on his big day.