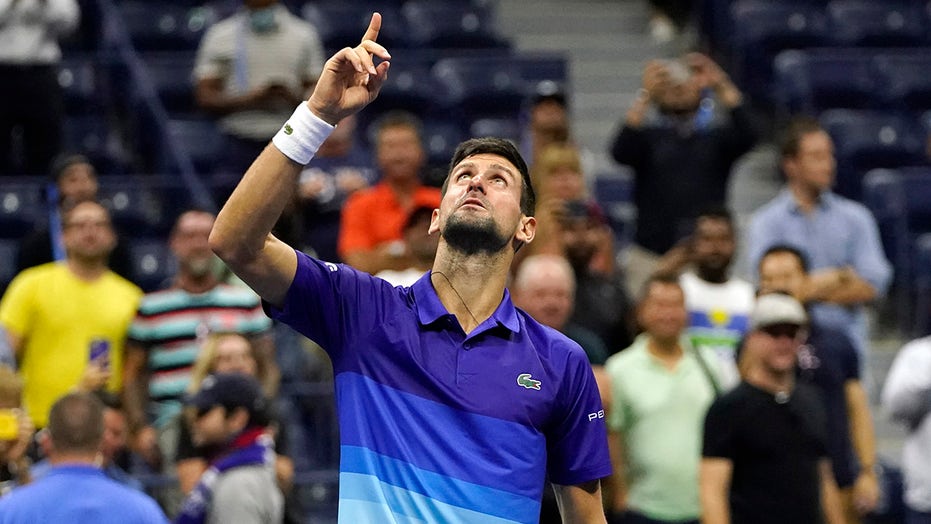 Never fazed, rarely flummoxed, Novak Djokovic is so collected in best-of-five-set matches even when falling behind, as he has done repeatedly at the U.S. Open.

No opponent, or the prospect of what’s at stake, has been too much to handle. Not yet, anyway. And now he’s two wins away from the first calendar-year Grand Slam in men’s tennis since 1969, along with a men’s-record 21st major championship overall.

Djokovic ceded the opening set for the third consecutive match at Flushing Meadows — and ninth time at a major in 2021 — but again it didn’t matter, because he quickly corrected his strokes and beat No. 6 seed Matteo Berrettini 5-7, 6-2, 6-2, 6-3 in a quarterfinal that began Wednesday night and concluded after midnight Thursday. 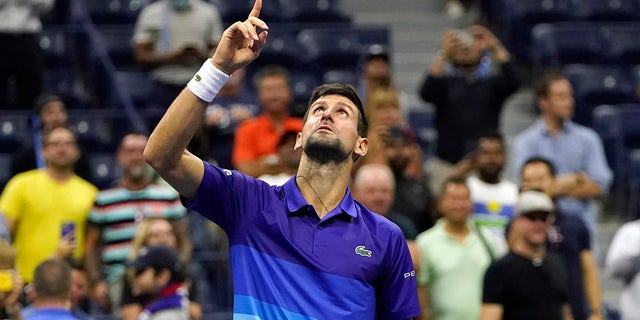 Novak Djokovic, of Serbia, motions and looks up after defeating Matteo Berrettini, of Italy, during the quarterfinals of the U.S. Open tennis tournament Thursday, Sept. 9, 2021, in New York. (AP Photo/Frank Franklin II)

Afterward, Djokovic cut off a question during his on-court interview, sensing where it was headed, and said: “Do not ask me anything about history. I know it’s there.”

As he came back and improved to 26-0 in Grand Slam play this season, Djokovic found every angle, thwarted every big Berrettini shot, and was so locked in he dove and dropped his racket during one exchange yet scrambled, rose, and reinserted himself in the point. He lost it, but the message to his foe was unmistakable, essentially amounting to, “I will do whatever it takes.”

After 17 unforced errors in the first set, Djokovic made a total of 11 the rest of the way.

“The best three sets I’ve played in the tournament, for sure,” he said.

When Berrettini made one last stand, holding a break point while trailing 4-2 in the third set, Djokovic steadied himself. He let Berrettini put a backhand into the net, then conjured up a 121 mph ace and a forehand winner down the line to hold, then pointed his right index finger to his ear — one of many gestures asking the 20,299 in the Arthur Ashe Stadium stands for noise.

Djokovic already earned trophies on the Australian Open’s hard courts in February, the French Open’s clay courts in June, and Wimbledon’s grass courts in July, defeating Berrettini in the final at the All England Club.

Djokovic has added five victories on the U.S. Open’s hard courts and now faces 2020 runner-up Alexander Zverev in Friday’s semifinals. If Djokovic can win that match and Sunday’s final, he will join Don Budge (1938) and Rod Laver (1962 and 1969) as the only men to claim all four major tennis singles trophies in one season. (Three women have done it, most recently Steffi Graf in 1988; Serena Williams’ bid in 2015 ended in the U.S. Open semifinals).

Zverev goes into the semifinals on a 16-match winning streak, including a 1-6, 6-3, 6-1 semifinal triumph against Djokovic en route to the gold medal at the Tokyo Olympics.

“I’m pumped,” Djokovic said, looking ahead to what awaits. “The bigger the challenge, the more glory in overcoming it.”

Hours later, both Djokovic and Berrettini showed signs of nerves on a muggy evening with the temperature at 75 degrees and the humidity at 80%. Applause, whistles and roars preceded the initial serve, a 124 mph ace by Djokovic, a three-time U.S. Open champion.

Banned from the tournament a year ago because of the coronavirus pandemic, fans are clearly enjoying being a part of all of this again.

They created a fugue of competing chants of Djokovic’s nickname, “No-le! No-le!” and a shortened version of Berrettini’s first name, “Mat-te! Mat-te!” Some greeted Djokovic’s missed serves with claps, considered a no-no in this sport, and some — perhaps the same folks — lamented Berrettini’s faults with a communal “Awwwww.”

Djokovic’s form was not at its finest early, with more mistakes than he could fathom — he rolled his eyes, put a palm to his forehead, muttered toward those in his entourage.

Berrettini uses his 6-foot-5, 209-pound frame to generate punishing power in serves and forehands; Djokovic called him the “Hammer of Tennis.”

But if any player is equipped to dull that style, it’s Djokovic, whose instincts, reflexes, agility, and mobility are superior. So he, unlike most other players, can return a 131 mph serve and not merely get it in play but do so with enough intention to lead to a missed backhand by Berrettini, as happened when Djokovic broke to lead 3-1 in the second set.

Still, Berrettini did manage to deflect the pair of first-set break points he faced with booming service winners — one at 132 mph, the other 134 mph — and then converted his fourth opportunity with a running cross-court forehand winner to lead 6-5. One game, and four set points, later, Berrettini owned the opener thanks to an errant forehand by Djokovic.

The match already was 77 minutes old. Berrettini left for a bathroom break to change his clothes; Djokovic sat on the sideline, draped a white towel around his neck and began the process of preparing to turn things around, as he so often does.

“I managed to forget about it, move on,” Djokovic said.

He also lost the first set in the third round, against Kei Nishikori, and in the fourth, against Jenson Brooksby, before winning in four both times. Did that against Berrettini at Wimbledon, too.

Maybe, Djokovic joked after this match, the early deficits amount to “good tactics, in a way.”

Didn’t take long for Djokovic to impose himself this time, either, thanks in large part to cleaning up his act by cutting down the errors, with three in the second set and three in the third, during which the retractable roof was shut because of expected rain.

Just holding serve became an ordeal for Berrettini, so much so that he let out a sigh of relief when he finally held after getting broken three times in a span of four games across the middle two sets. By then, though, he had given away the second and had fallen behind 3-0 in the third. The fourth also reached that score, and Djokovic was one step closer to history.