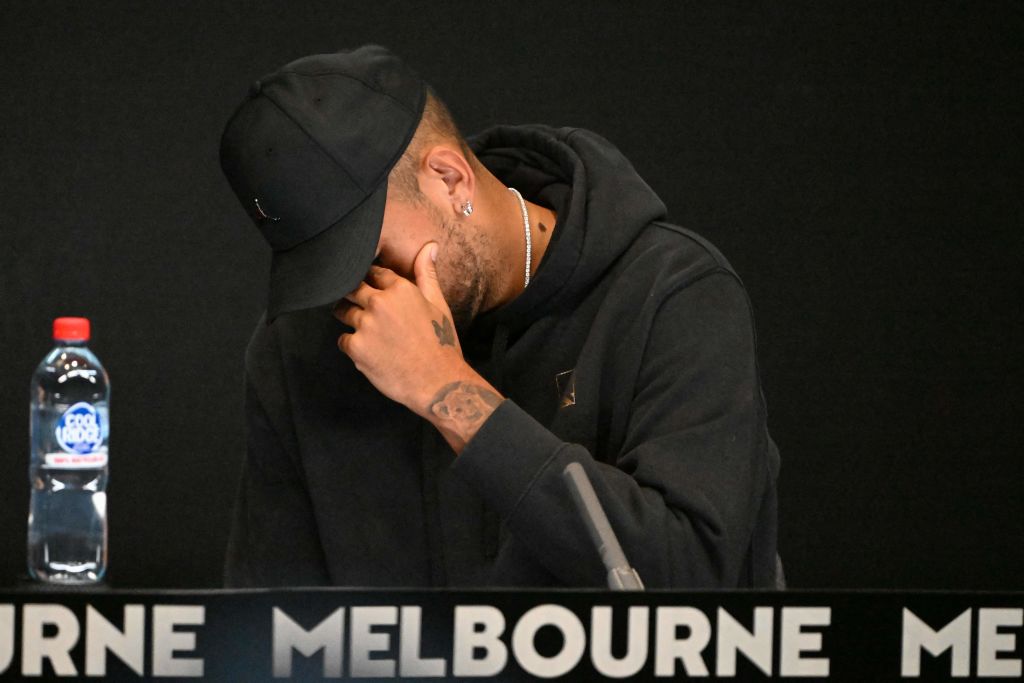 Nick Kyrgios has been forced to withdraw from the Australian Open – his home tournament – due to a knee injury, with the Aussie giving an emotional press conference on Monday.

The world No.21 had been one of the favourites going into the tournament but he held a press conference at Melbourne Park in which he explained that a cyst growing in his left meniscus would force him to miss the Grand Slam.

Kyrgios – who had been due to face Roman Safiullin on Tuesday – says he is ‘devasted’ to miss the Australian Open and looked emotional during the press conference, but vowed to bounce back from the disappointment.

‘This is one of the most important tournaments of my career. It hasn’t been easy at all,’ Kyrgios said of the decision. ‘I’m obviously extremely disappointed.’

He continued: ‘That’s life. Injury is a part of the sport. I guess I can draw some inspiration from someone like Thanasi (Kokkinakis) who has had a bunch of injuries and has bounced back.

‘I’m not doubting I will be back to my full strength and playing the tennis I was playing prior to this event.

‘I’m devastated, obviously. It’s my home tournament. I’ve had some great memories here. Obviously last year winning the title in doubles and playing the best tennis of my life, probably.

‘Then going into this event as one of the favourites, it’s brutal. All I can do now is just look forward, do what I need to do and come back.’

Kyrgios’ physio Will Maher was also at the press conference and said they had tried everything to compete: ‘To Nick’s credit, he did try everything. Even last week, he was having a procedure called a fenestration and drainage where they use a syringe to try and drain the cyst.

‘We came to Melbourne with the hope there might be some pressure relieved from that procedure and he’d have some relief and be able to get up to a level he was comfortable to compete.

‘We used the match, the charity event against Novak [Djokovic], as a gauge to see if he could compete at that highest level.

‘He didn’t pull up great, and he still tried to give himself every chance in the following days to have subsequent training. But it was clear that with each passing session that he was getting sorer and sorer.

‘The situation now is, we want to prevent him from having further injury or making that injury worse. So now he’ll go back to Canberra at the end of the week, he’ll have an arthroscopic procedure to clean up his lateral meniscus and remove the paralabral cyst.’