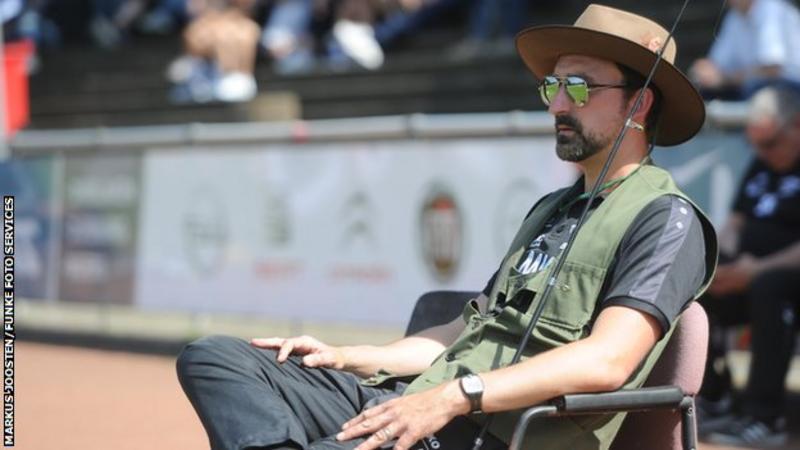 Every manager reacts to criticism differently, but German boss Markus Kay took things to a new level as he oversaw his final game dressed in fishing gear.

Kay – who was in charge of fifth-division side TV Jahn Hiesfeld – was told with one league game remaining he would be sacked at the end of the season.

Bad enough, but he discovered his fate by WhatsApp message, while club president Dietrich Hulsemann told the media that the club’s staff and players may as well have been “fishing” they were so immobile in their previous game.

A furious Kay decided to respond to what he considered a “public scolding” and so, with a fishing rod by his side, the 37-year-old watched his last match in charge in silence on a chair by the touchline, having donned a fishing vest and hat.

Following the defeat in their penultimate league game that had all but confirmed relegation, owner Hulsemann said he was the only one interested in retrieving loose balls that went over the fence.

“There were five players on the bench,” he said. “None of them moved. And our trainers sat motionless on their camping chairs. I wanted to give them a fishing rod.”

Before the team’s final home fixture, Kay informed the players of his unique protest.

“When I think about how my players looked at the coaching bench in disbelief over and over again in the first quarter of an hour, I think nobody really expected it,” he told German magazine 11freunde.

“Mr Hulsemann had written me and team manager Thomas Drotboom a message that we would not receive [renewed] contracts. I think such a reaction is highly disrespectful. His remarks were laughed at in disbelief.”

But when club captain Kevin Corvers – also involved in his final match for the club – decided he had seen enough, the manager cut his protest short out of “respect”.

“The sign of silent protest had long been set. I did not want anyone to feel embarrassed,” Kay said.