Swimsuit model who streaked across field during Champions League final gets special souvenir according to her Twitter.

Champions League streaker Kinsey Wolanski was featured in a fan-created video appearing to show her score a goal during a match between River Plate and Boca Juniors from December.

The 22-year-old swimsuit model tweeted the video Monday, which was created by zekiel79ok2 and posted across various social media platforms. Wolanski wrote: “I did it again folks.”

Wolanski ran across the pitch in a swimsuit Saturday during the UEFA Champions League final between Liverpool and Tottenham Hotspur in Madrid. The high-cut black swimsuit was promoting her boyfriend Vital Zdorovetskiy's adult website, “Vitaly Uncensored,” which reportedly has more than 30 million registered users. 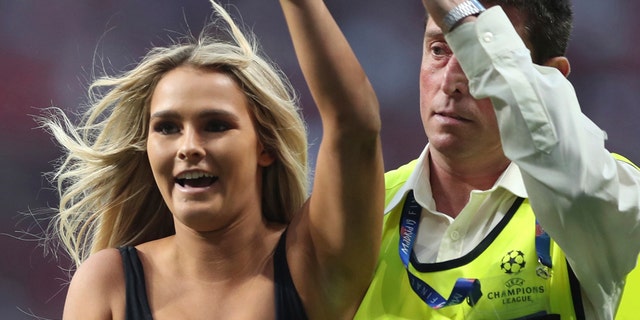 Kinsey Wolanski invaded the pitch and was taken away by security during the Champions League final soccer match between Tottenham Hotspur and Liverpool. (AP Photo/Francisco Seco)

Wolanski had her Instagram account hacked and suspended soon after running across the field. However, she tweeted Monday she received a special glass-encased VIP Champions League final ticket. She said it was given to her by a UEFA official at the airport.

“The sweetest guy who works for UEFA gave me this plaque in the airport,” Wolanski tweeted.

Wolanski said the stunt increased her Instagram following from 250,000 followers to 1 million, according to The Sun.

“You guys I can't even fathom what is going on right now, I feel amazing and so thankful, I really could cry," Wolanski posted in a thank-you message on her account. "I really did this just because I really want to push myself out my comfort zone, I love that feeling – that adrenaline feeling and doing crazy things.

“I love to do crazy things all the time, but I never thought it would get to this scale and all of your support and messages and everything is so amazing.” 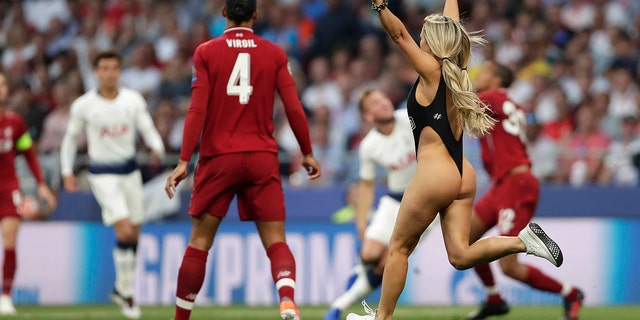 A pitch invader interrupts the game during the Champions League final soccer match between Tottenham Hotspur and Liverpool at the Wanda Metropolitano Stadium in Madrid, Saturday, June 1, 2019. (AP Photo/Manu Fernandez)

Zdorovetsky himself stole the show at the 2014 World Cup final between German and Argentina when he ran onto the field, exposing his bare chest, which had the scrawled message "Natural born prankster."

Zdorovetsky, who is 27 and also of Russian descent, expressed approval of his girlfriend's stunt at the Wanda Metropolitano stadium, saying on his Instagram, "I can't wait to marry you."

Wolanski has appeared in Sports Illustrated and Maxim, among other publications.