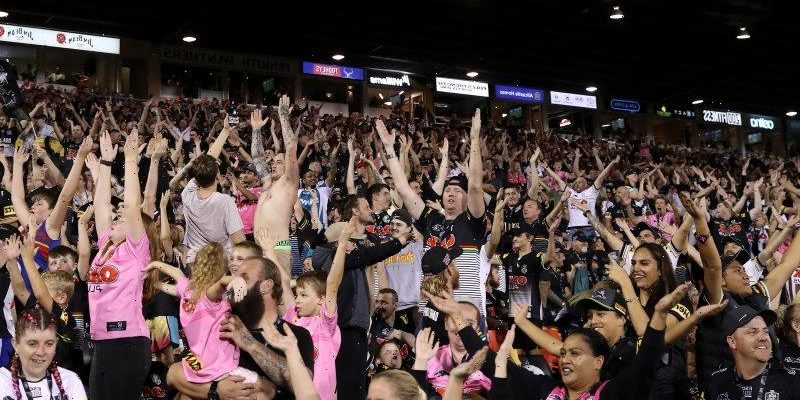 Look, if I can’t break records like Usain Bolt did, do you mind if I at least go on like a broken record for just a moment?

For I think I might have mentioned #StadiumSplurge before, yes? I am nearly sure I passed comment that it was OUTRAGEOUS for the NSW government to spend billions of dollars providing state-of-the-art infrastructure for the non-tax-paying business of rugby league by knocking down modern and quite serviceable stadiums, while there are so many other areas of public infrastructure that are crying out for their largesse. (Start with schools and hospitals, and work your way back from there.) 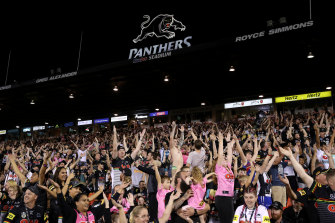 A proposed new stadium at Penrith would cost up to $300 million.Credit:Getty

And the battle was half-won, with the outcry so great that the government at least pulled back from re-doing the entire 20-year-old Olympic Stadium, while pushing ahead with knocking down the 30-year-old Sydney Football Stadium.

Which gets us to where we are today. The instant the government shelved the billion dollar Olympic stadium plan the NRL switched from “we need state-of-the-art” big stadiums to, “no, we need the government to do boutique stadiums, too!”

I never saw such chutzpah. The most stunning thing of all? The government is reportedly about to announce the first boutique stadium built courtesy of the taxpayers will be at Penrith!

Yup. I know. That would be Penrith, which we know has three things.

#FFS! Read it again. Money for the community sports grants ended up going to a Penrith Leagues Club carpark.

And now, after the disgrace of the SFS being knocked down, after so many other areas of public infrastructure crying out for help, the NSW government is about to commit ANOTHER $250 million to $300 million so that certainly the richest club in the state gets still more taxpayer largesse. What is wrong with this picture?

And the madness for stadiums goes beyond Penrith. Before the last election, Orange City Council was promised $25 million by the Premier to have “shovel ready” a sporting stadium before the next election. The problem is that the stadium is planned on a 20-hectare site of crown land with nearly 600 mature trees directly adjoining the western regions main medical precinct – a precinct which already has a traffic problem. When council called for submissions for the development, of the 177 submissions no fewer than 89 per cent of them were opposed. No matter really, as the council is the owner of the site, the applicant for the development approval and surprisingly also the consenting agent to grant the approval. I repeat: what is wrong with this picture? And why push the whole damn thing through when the council elections are in a little over two months time?

Finally, what is it about stadiums that generates such insane politics. Yes, I get the whole bread and circuses thing, but lately we’ve had so many circuses, and so little bread.

What’s in a word?

The explanation? Well, though the Tom Youngs in question remains in deep shit for unseemly brawling on the rugby field, he wasn’t actually working as a prostitute at the time (not that there’s anything wrong with that). The explanation is that the Leicester Tigers captain’s position is “hooker”, and the Americans had got confused – just as they did recently, when Bath’s Ross Batty announced he was going to hang up his boots. On that occasion the headline memorably read: Ross Batty: Bath Whore Announces Medical Retirement From Professional Rugby.

Me? All this at a time when the USA is a surprise entrant to host the 2027 World Cup.

Dianas do themselves proud

All these years on, TFF’s favourite female rugby team are still going strong. Ish. Last weekend, finding they only had seven women available to play in the Southern Inland Women’s 10 comp in Wagga Wagga, one husband (sniff) said they should cancel. Did they? Did they HELL! Coach Stuart Stout gave a speech for the ages, consisting of four words, “Bugger that, we’re playing”, and off they went. They were expecting Wagga City to be jerks about it, and put 10 women on the field against them to crush them that way, but instead the Wagga women matched them, and only put seven on the field. The story is only spoiled by the fact that the mighty Dianas went down 49-0 and were lucky to get to nil on the day – courtesy of the fact that Wagga had their fastest seven women capable of playing what turned into a sevens match – but I don’t care. It is the spirit with which they play. And “bugger that, we’re playing” is the very essence on which the great game was built. Bravo, you mighty Dianas.

Oh, eat your heart out Gordon Bray. We all loved your rugby calls for many things, including your colourful descriptions of players’ professions, like being told that the Uruguay Test XV included a “green-grocer, doctor, cat-and-dog food supplier and Kleenex-and-Huggies brand manager …”

BUT, as if you didn’t know, Ireland’s sevens side has qualified for the Olympics for the first time, knocking over no less than France in the repechage final in Monaco, and their line-up includes “a law student from Love Island, one of the fastest schoolboys of all time, Aaron Sexton, a mathematics maestro and . . . a ‘social media influencer’ just returned from exile in LA!”

Ian Roberts on NFL player Carl Nassib becoming the first active American footballer to come out: “It’s about him being free of the chains and the weight that have held him down for years. It’s frustrating when people say, ‘Who cares?’ The people who say this don’t know what it’s like to suffer prejudice. These people don’t know what it’s like to be brutalised, to be made to feel like they’re nothing. Who cares? I care.”

US Open winner Jon Rahm after he had to pull out of a tournament a couple of weeks ago in which he was leading after testing positive for COVID: “I’m a big believer in karma, and after what happened a couple weeks ago, I stayed really positive knowing good things were coming . . .It almost feels like it’s a movie that’s about to end and I’m going to wake up soon.”

Bulldogs consultant former All Blacks coach Steve Hansen on what Trent Barrett needs to do to succeed: “This job will throw things at him at times that will cause that, so he has to stay being Trent Barrett and not deviate off course.” Sounds like a plan, Steve, but if there was any choice in the matter, he could surely try being Craig Bellamy for a bit?

Cumberland City Council mayor Steve Christou has vowed to save the Western Sydney Two Blues, slamming the ploy to merge three struggling Shute Shield clubs as a play that “smacks of jealousy and elitism”: “I was disgusted to hear of the attempts to force a merger of our local Two Blues rugby team with another club. It’s been orchestrated in secret by the elitist eastern suburbs and north shore clubs, just as council is finishing a new $13.5 million stadium and international standard rugby field at Granville Park for the Two Blues.”

Embattled Carlton coach David Teague. “That’s our challenge, we have to work really hard and roll our sleeves up because today they just out-tackled us too easily.” Coach? I might have spotted the problem. It’s about your singlets …

Kevin Durant and his size 18 shoes grazed the three-point line meaning game seven of the Nets- Bucks playoff series went to overtime, instead of a one point Nets victory. They Nets ended up losing. “My big-ass foot stepped on the line. I just saw a little screenshot, how close I was to ending their season off that shot, but it wasn’t in God’s plan, and we move on.” The mind BOGGLES, yes, that people actually think like that? To borrow from Stephen Fry, if everything is God’s plan, why does the plan include “insects whose whole lifecycle is to burrow into the eyes of children and make them blind”?

Annie Sparrow, an Australian population health expert based at New York’s Mount Sinai Centre on the Olympics. “It is a bit like the [International Olympic Committee] is a drunk driver and is behind the wheel of the car. And I can’t stop it. None of us can stop it. The athletes are in the car.”

Phil Gould on Reece Walsh: “But to bring him into a team that was beaten 50-6 in game one, I think is a disgraceful decision by the Queensland selectors. To be asking an 18-year-old to come in and solve this problem is not fair on the kid.” Meantime, why did you block me on Twitter, Phil? You are missing out! Try me again on @Peter_Fitz. I’m waiting.

A very sad looking Stuart MacGill on his recent abduction: “I’ve thought about it probably 20 hours a day ever since.”

Team of the week

New Zealand Test cricket team. Won the World Test Championship, beating India. This is a fair effort for a nation of five million for whom cricket is a long way behind rugby in popularity, up against a nation of 1.4 billion cricket nutters.

Melbourne City and Sydney City. Contesting the A-League grand final on Sunday. Nope. Me neither.

Laurel Hubbard. Kiwi weightlifter will make history at the Tokyo Olympics by becoming the first transgender athlete to compete at the Games.

Jon Rahm. First player to birdie the last two holes to win the US Open by one shot.

Reece Walsh. Good luck to the teenage rookie who makes his State of Origin debut tomorrow night despite having played just seven NRL games for the Warriors.

Kasi Bennett. The partner of Usain Bolt gave birth to twin boys, and they have named them Saint Leo and Thunder…

Wilcannia Kids soccer team. The mob raised $10,000 on GoFundMe to get them boots, jerseys, and a small budget to help with traveling to play teams in other towns – which is quite an exercise when you live so far out the back o’ Bourke that Dubbo looks like the big smoke!