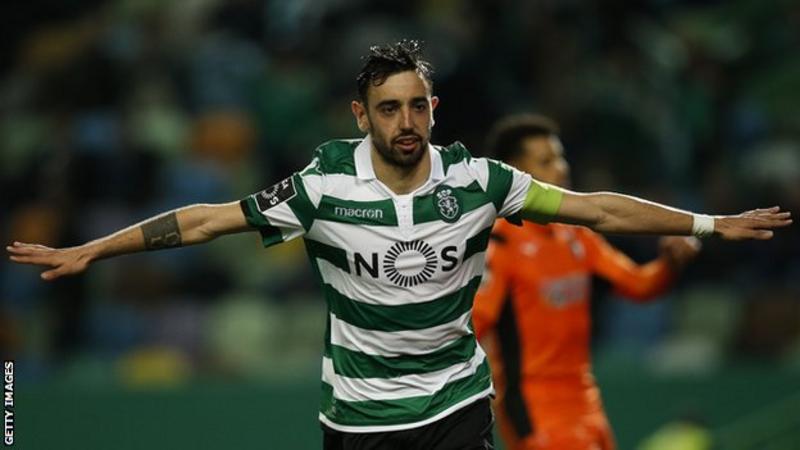 You may be hearing the name Bruno Fernandes a lot during June and July.

The 24-year-old midfielder is one of the hottest prospects in Portuguese football and is being linked with a move to the Premier League, with Manchester City and Manchester United reportedly leading the interest.

Sporting Lisbon’s captain has scored 32 goals and registered 17 assists in all competitions this season and is the reigning Primeira Liga player of the year.

So what makes him so good – and what would he bring to the Premier League?

Better than Pogba? The next Lampard?

Fernandes has 20 goals and 13 assists in the Primeira Liga this season. His involvement in 33 league goals is a higher total than can be boasted by any other midfielder across the top divisions of Europe’s leading leagues – England, Italy, Spain, Germany, France, Portugal and the Netherlands.

That means he is sitting above some big names. It is more, for instance, than Manchester United’s Paul Pogba and Tottenham’s Christian Eriksen have achieved.

The Portugal international has been involved in 46% of Sporting’s 71 goals in the league this season. He has been the league’s player of the month four times this term, winning the award for the past three months, and four times last season.

And he is only one goal behind Benfica forward Haris Seferovic in the league’s goalscoring charts with one game to go.

In just two seasons back in Portugal – following spells with Udinese and Sampdoria in Italy – he has 48 goals and 37 assists in 107 games.

He has been compared with Frank Lampard, surpassing the Chelsea great’s most prolific season in 2009-10 when he scored 27 goals, considered to be a record for a midfielder in Europe.

His prolific form has impressed current international and former under-21 team-mate Bernardo Silva.

“He has made a fantastic season with many goals, many assists that are not normal for a player of his position, he has the leading numbers and we will see what happens at the end of the season,” the 24-year-old Manchester City midfielder has said.

“He is a player who can play in other championships.”

Fernandes has been a shining light for Sporting, even as the team struggled and finish third a year ago and was named the league’s best player ahead of Benfica’s Brazilian striker Jonas, who had scored 34 goals. He is tipped to win the trophy again this year.

The team are set to finish third again after Sunday’s 1-1 draw with Tondela, with – you guessed it – Fernandes on the scoresheet for Sporting. He can also still win the country’s main domestic cup competition, the Taca de Portugal, when Sporting play Porto in the final on 25 May.

“Fernandes is most like Lampard, quite similar to him in some aspects, but not as strong yet. He is intelligent, the team plays around him, he is their centre of gravity.

“This season he is blowing every record – now he has to make the next step.”

Fernandes spent much of his youth career at Boavista before moving to Italy in 2012. After spells at Udinese and Sampdoria, he returned to Portugal with Sporting in 2017 for £8.5m.

A year later he was one of a number to quit the club after an attack by fans at their training ground.

But just days later and following the resignation of president Bruno de Carvalho, he rejoined, signing a new five-year contract with a 100m euro release clause.

However, he is expected to be allowed to leave for less than that if a club makes a substantial offer, according to the Portuguese media. How much that will be has varied widely in the press, anywhere from £40m-£85m.

“Sporting are not in a place to refuse an offer of 70m euros or even 55m euros,” says Pires.

Whatever the amount, it is likely to break the Portuguese top-flight transfer record of £42.7m that Real Madrid are paying Porto for defender Eder Militao.

That price could go up if he impresses for Portugal at the Nations League finals in June and adds to his 11 caps.

The view in Portugal is that Fernandes will join Silva at City. Spanish football expert Guillem Balague wrote in his BBC column this week that City “like the look” of Fernandes as a holding midfielder.

“Everyone is convinced it is a good choice for him – the way he plays, he is perfect for the football of Pep Guardiola,” says Jose Delgado, deputy director at Portuguese sports newspaper A Bola.

“United would not be the club at this moment for Bruno. It would not help him grow. The team is a mess and would continue to be for the next few years.

“City don’t have a player like him. He is an attacking midfielder, a box-to-box player who works a lot in defence, and is a very good passer. Like Bernardo he never loses a pass.

“I think he could sometimes make the difference. He is what Guardiola needs to go further with his team to challenge for the Champions League.

“He would not replace Fernandinho. If he were to replace someone, I would say it would be David Silva in the long term. But he is not a six, he is a very good eight.

“Right now he is bigger than the Portuguese league and he has carried Sporting all season. For his evolution, he must go to one of the big leagues. Going to England would make him a better player, the supporters understand that.

“Bernardo has more technical quality than Bruno; Bruno has more goals. Hopefully both will help Portugal to become world champions.”