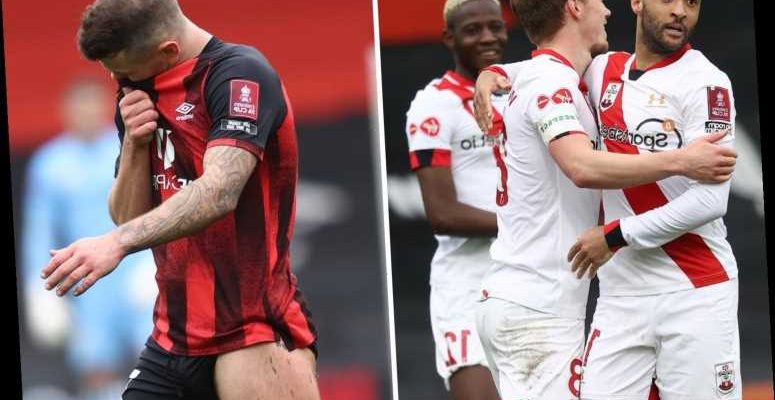 NATHAN REDMOND’S killer goal was so good that Glenn Hoddle likened it to Michael Owen’s wonder-strike against Argentina!

In fairness, there was a similarity to Owen’s unforgettable solo effort for Hoddle’s England at World Cup ‘98, albeit at a much lower level. 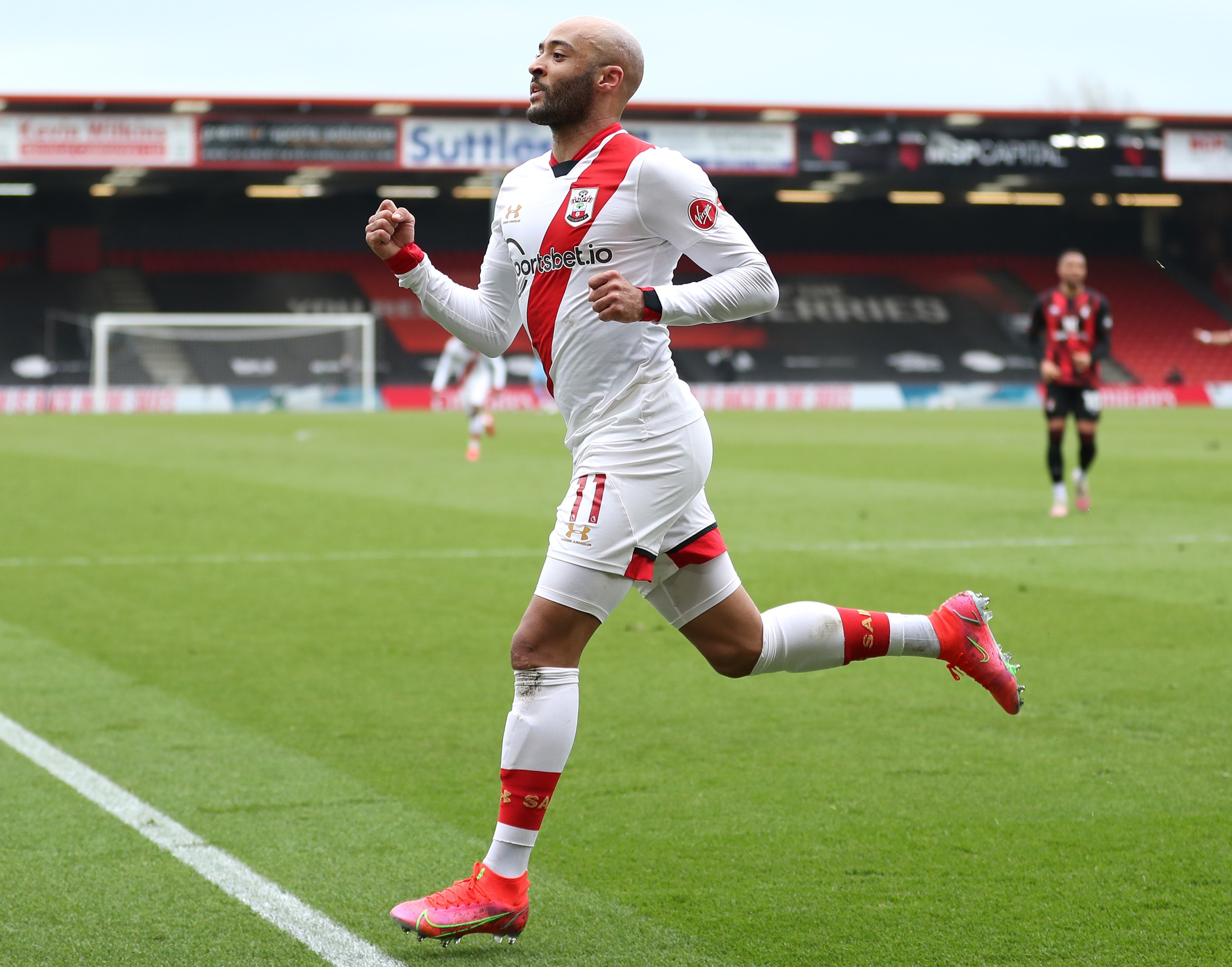 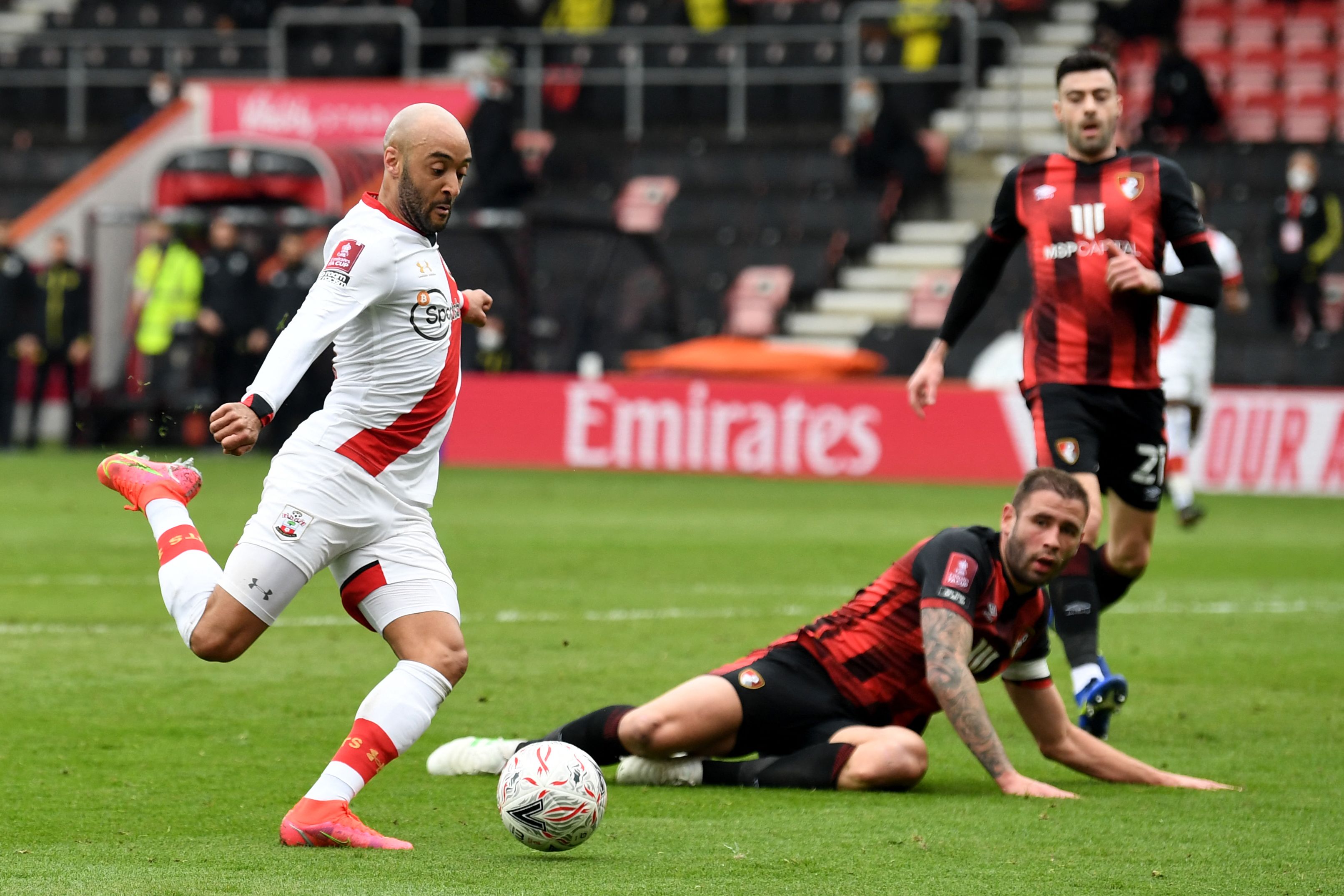 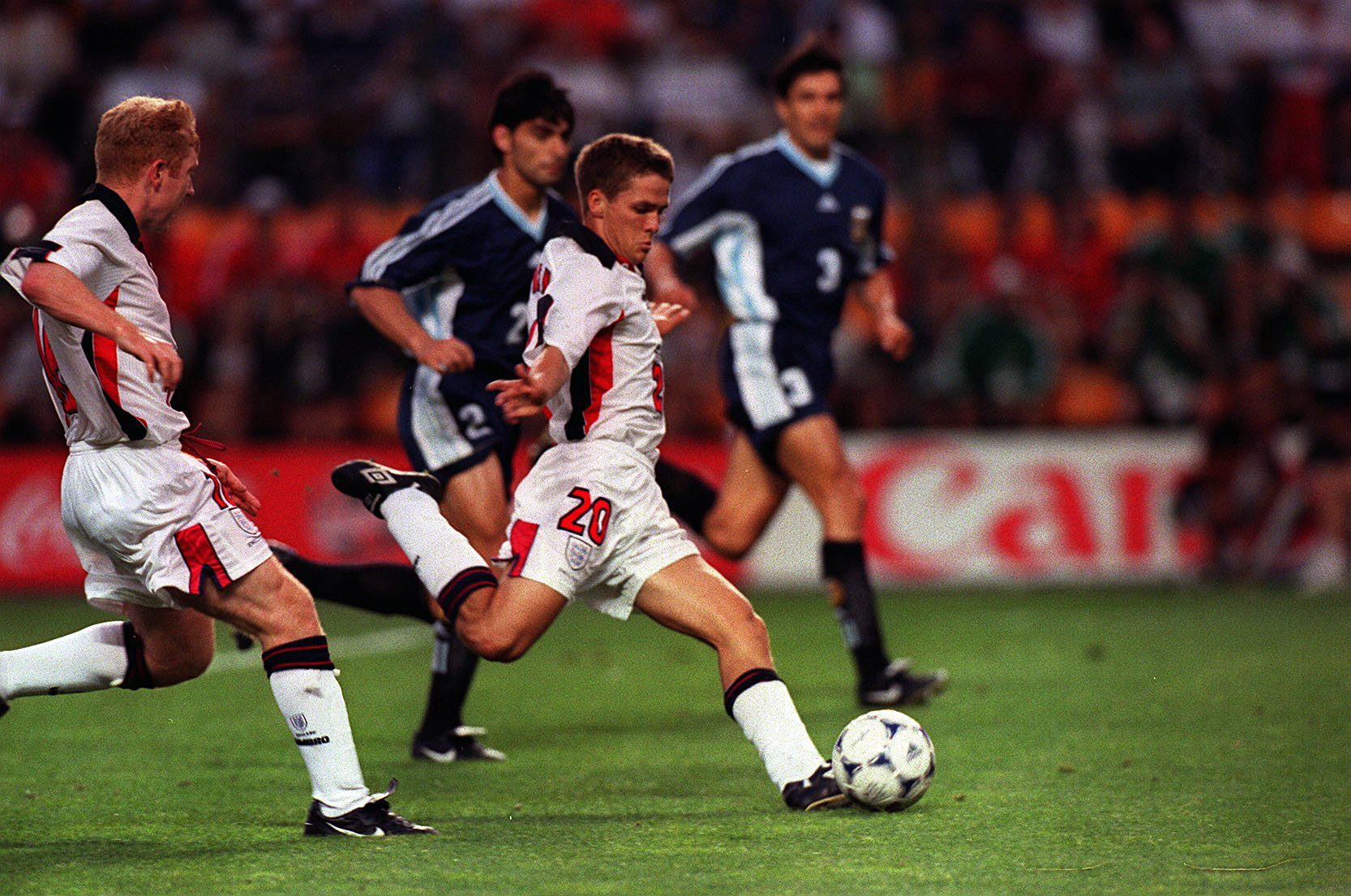 Redmond picked up the ball midway into the Bournemouth half and flew past Cherries skipper Steve Cook, who played the Roberto Ayala role in this scenario.

The Southampton forward then unleashed a devastating strike into the far top corner with all the accuracy that Owen showed in Saint Etienne 23 years ago.

Hoddle, on co-comms for BT Sport, marvelled: “What a finish, Michael Owen-ish against Argentina!”

The majestic goal came right on half-time and doubled Saints’ lead to kill off their Championship neighbours.

Redmond then piled on the misery with his second, firing in a delightfully-controlled rebound after Stuart Armstrong had crashed the post.

The 27-year-old’s man-of-the-match display came just before the international break and served as a reminder that Redmond actually does have an England cap to his name.

That sole appearance for his country came four years ago as a second-half sub for Adam Lallana against Germany. 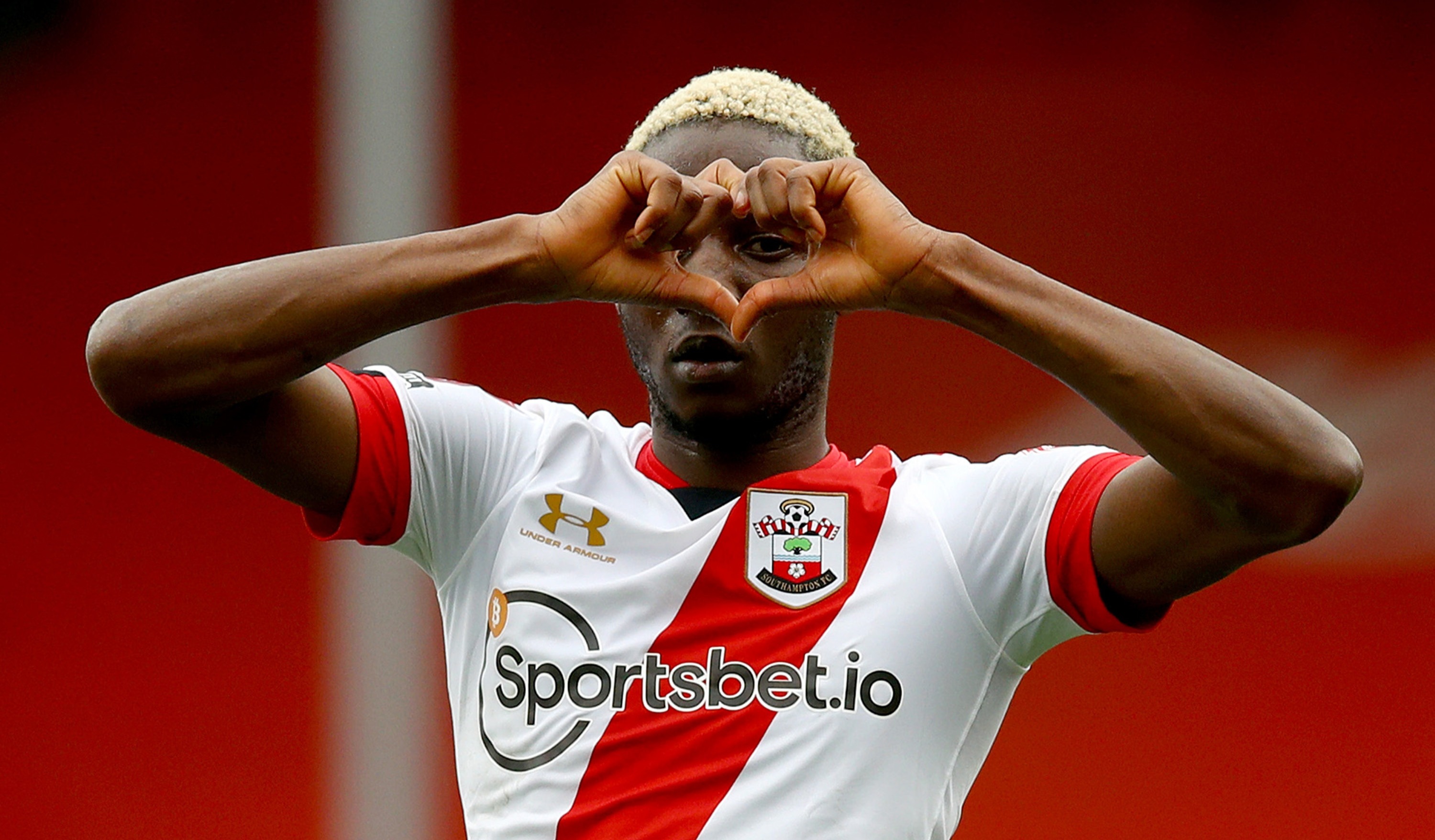 He did make another of Gareth Southgate’s squad two years later but no further caps came.

And given his largely underwhelming form for a largely struggling Saints side, Redmond could have no complaints.

But this performance showed just how good the Birmingham-born ace can be on his day, even if those days do not come along very often.

They certainly have not in the second-half of Southampton’s league campaign, which has seen Ralph Hasenhuttl’s men go from league-leaders to having mild worries about survival after ten defeats in 12.

The FA Cup has been their saving grace though and now, predominantly thanks to Redmond, they can look forward to a second semi-final appearance in four years. 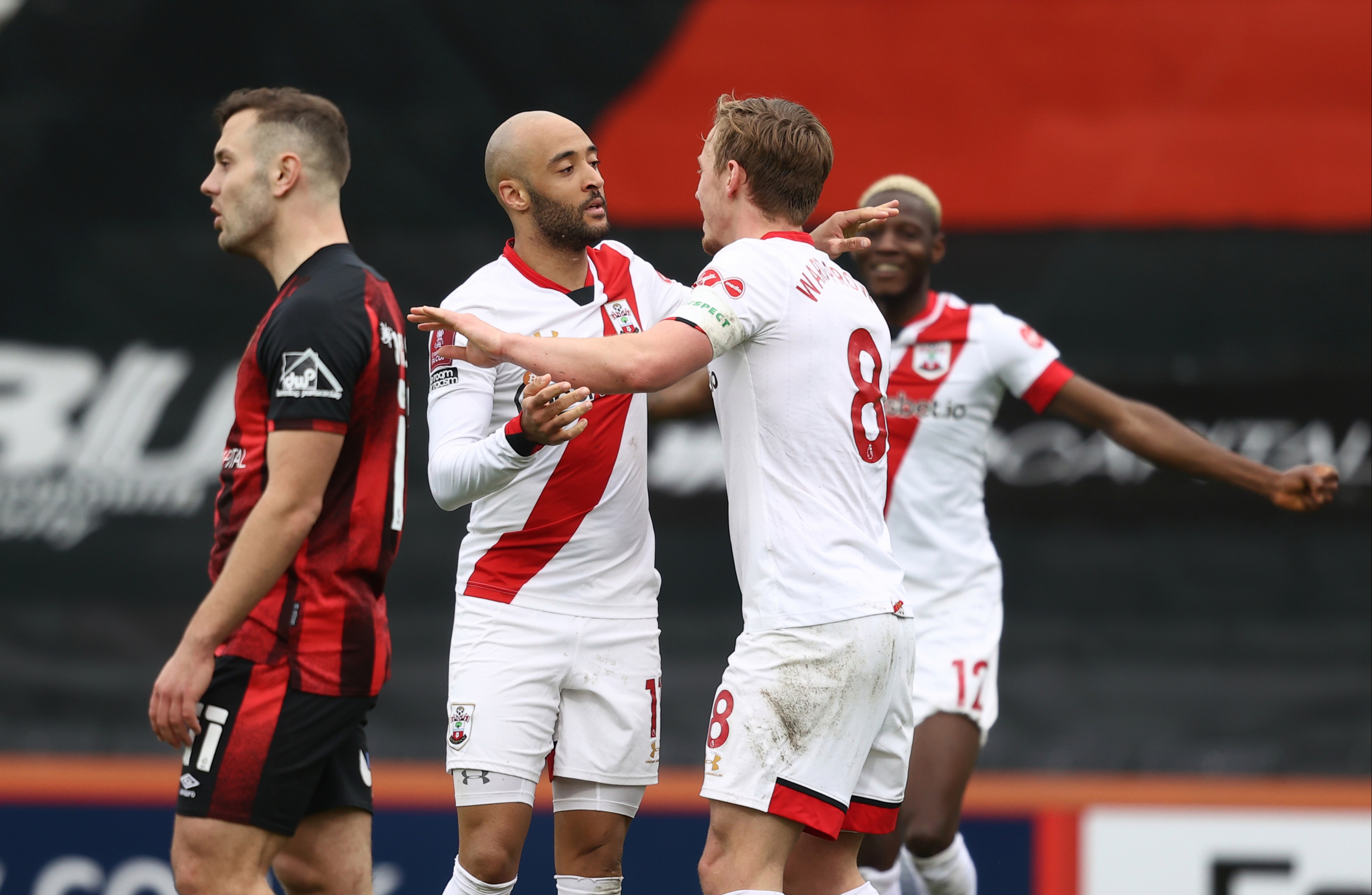 Saints have actually had a fair few Wembley appearances in the last decade, including the League Cup final defeat to Zlatan Ibrahimovic’s Manchester United in 2017.

Although the last time they won a competition came 11 years ago when Alan Pardew’s side – which included Michail Antonio, Rickie Lambert and Lallana – lifted the JPT.

Bournemouth will be bitterly disappointed with their offering here as they made it easy for their Premier League guests.

Woodgate’s side had comfortably beaten play-off rivals Swanea 3-0 in midweek so presumably would have been in confident mood – but that did not last long.

And it could have been far more embarrassing had VAR not intervened. 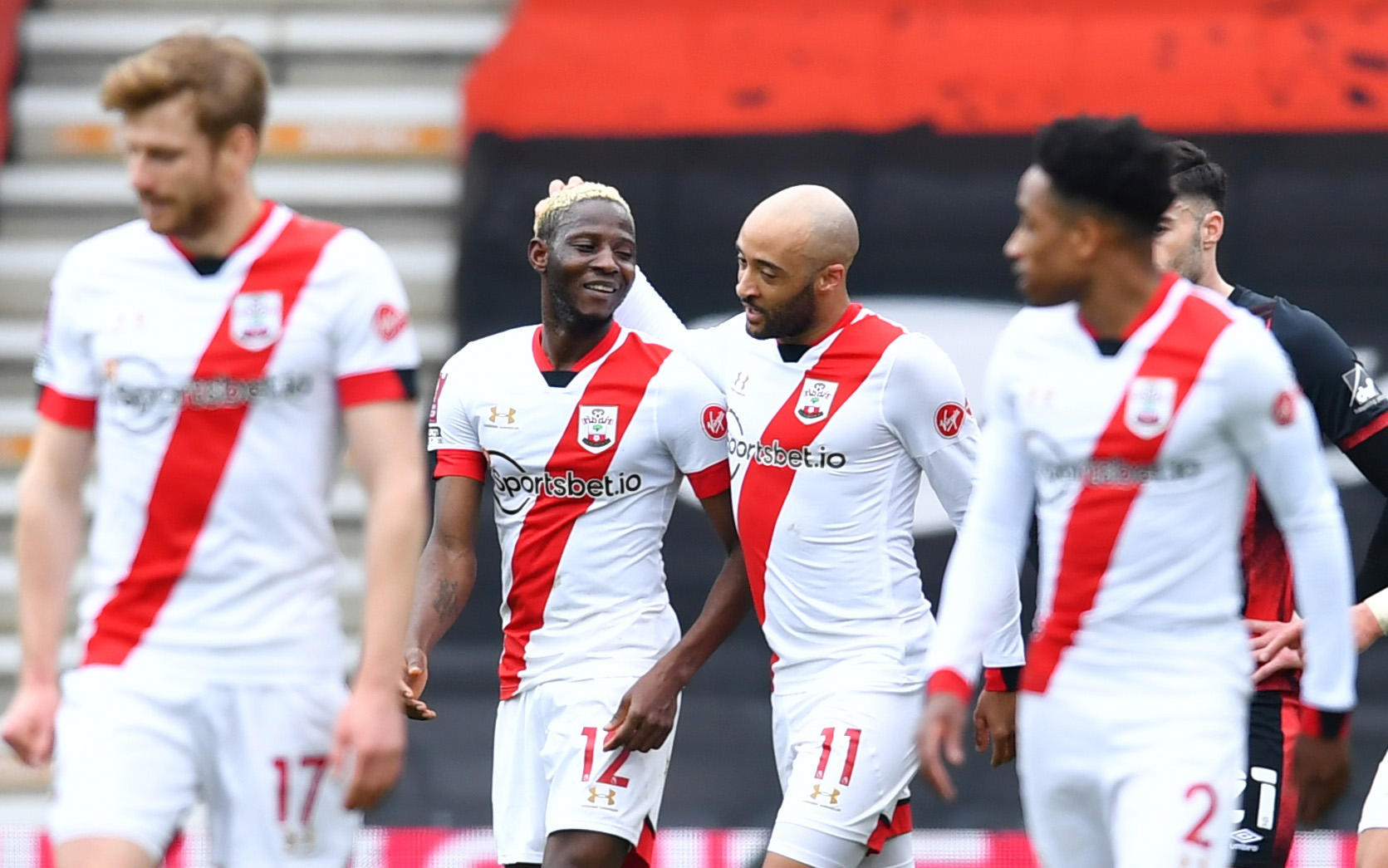 With 11 minutes on the clock, Saints thought they had broken the deadlock when Cherries loanee Cameron Carter-Vicker steered Kyle Walker-Peters’ cross into his own net.

But Stockley Park, who would not have been utilised had this fixture been played in the previous round, adjudged Walker-Peters to have been marginally offside.

Arnaut Danjuma offered Bournemouth’s only real threat and drew a smart stop from Fraser Forster at his near post.

But in the 37th minute, Southampton showed their superior quality with a picture-perfect opener. 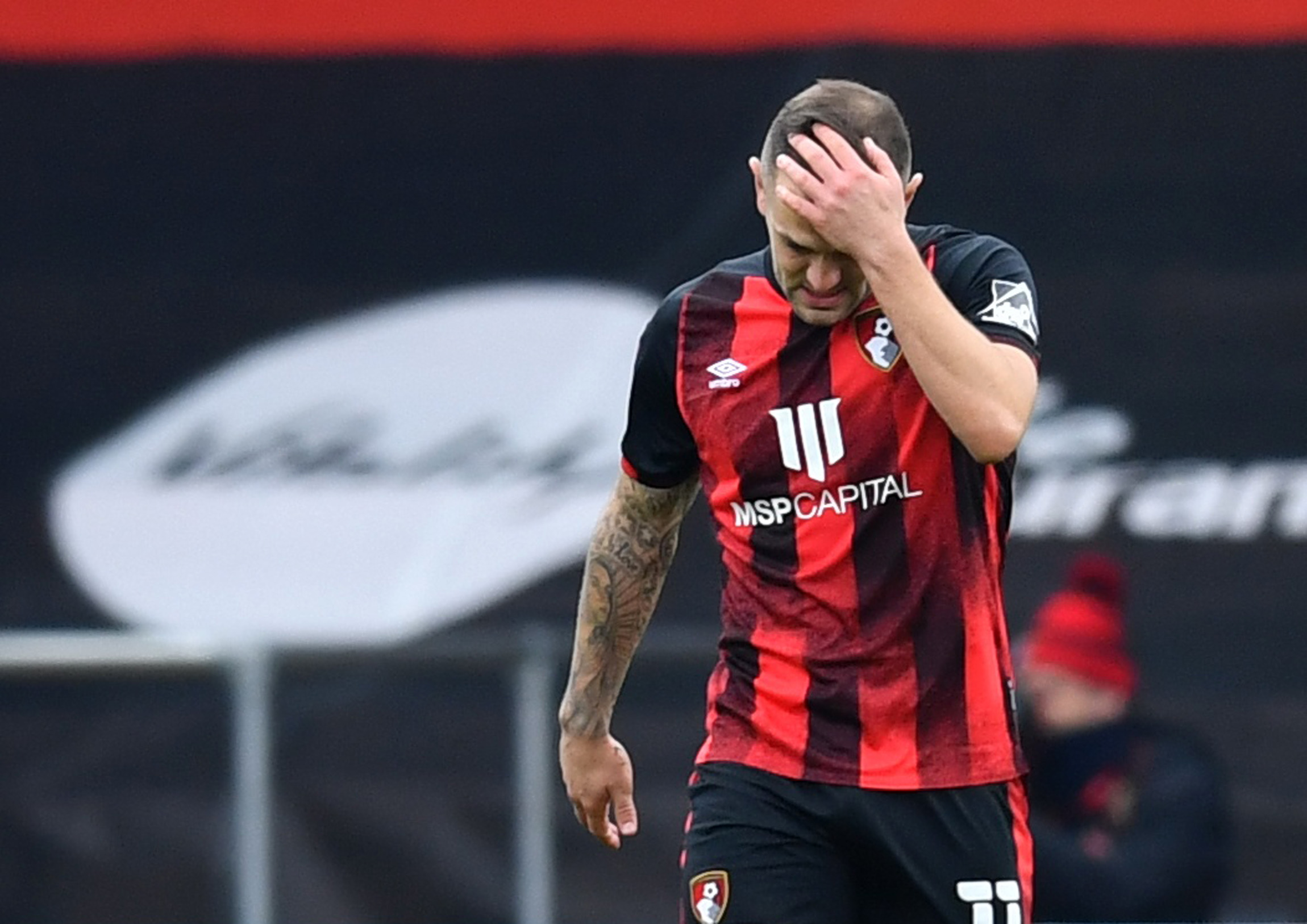 Redmond glided across the pitch and stroked the ball through for Djenepo dispatch coolly into the far corner.

The Mali winger has suffered with form and fitness since arriving from Belgium two summers ago but this was a reminder of his capabilities.

Bournemouth knew the game was up when Redmond’s Owen impression made it 2-0 seconds before the interval.

It was a marvellous goal but Woodgate, a top England centre-back in his day, will have been devastated by his side’s poor defending.

His side allowed Stuart Armstrong to chest down a throw-in and feed Redmond who did the rest with his mazy run and blistering finish.

Che Adams thought he had made it 3-0 early in the second half with a lethal blast, but once again VAR chalked it off for offside against Armstrong in the build-up.

It was harsh on the would-be goal-scorer, who had been celebrating what he believed to be his fourth goal in as many games.

Saints did not have to wait long for their third though and it perhaps best summed up their confidence in this one-sided affair.

Redmond laid back to Armstrong who cracked the post from just outside the area with his weaker left foot just before the hour.

The ball bounced back to Redmond who showed remarkable control to fire it into the far corner.

Ex-Norwich man Redmond was inches away from a hat-trick when he curled the wrong side of the post with 15 minutes to play.

But it did not wipe the smile off his face as he rolled back the years to send Southampton to Wembley for the third time in five seasons.