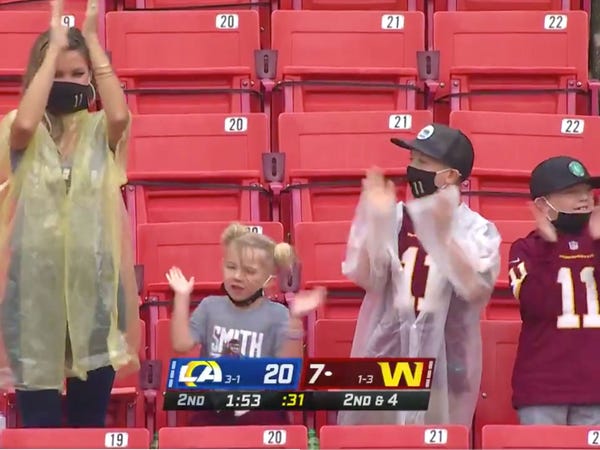 Alex Smith completed his long journey back to the NFL on Sunday, and his family gave him an adorable standing ovation to celebrate his accomplishment.

Smith took the field for the Washington Football Team in the second quarter of their game against the Los Angeles Rams after starting quarterback Kyle Allen went out after taking a helmet-to-helmet hit.

With Allen at least temporarily sidelined, Smith jogged out onto the field and completed his first pass. While there aren't many people present at NFL stadiums across the country right now due to the COVID-19 pandemic, Smith's family made it to FedEx Field and stood to give him an extremely deserved ovation.

Smith hadn't taken an NFL snap since suffering a horrifying leg injury in the 2018 season that nearly required amputation. Seventeen surgeries later, Smith began working his way back to health, and eventually, to NFL playing shape.

Sunday was Smith's first game back as an active quarterback, and after Allen's injury, his journey back to the NFL was complete.

On Twitter, fans and former players alike celebrated Smith's return, including a shout-out from former Washington quarterback Joe Theismann, who suffered a devastating leg injury of his own that was shockingly similar to Smith's.

After Smith's injury, it felt like he'd never play again, but two years later, he's back out on the field for Washington.

His family and NFL fans around the league are thrilled to see it.