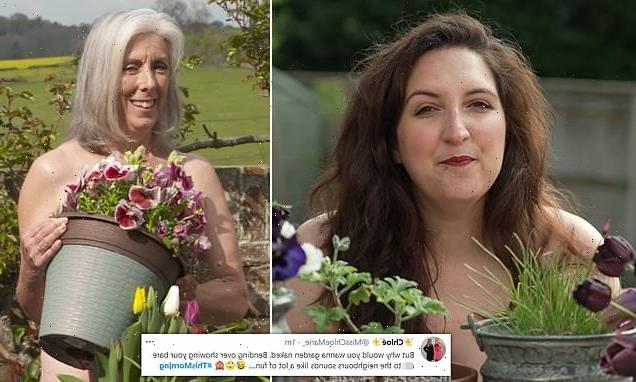 Two women bravely bared it all on today’s episode of This Morning to share their love of gardening in the buff ahead of World Naked Gardening Day tomorrow.

Claire Howard, from Oxfordshire, and Kendall Platt, from Hampshire, both told presenters Alison Hammond and Dermot O’Leary that they love to connect with nature and regularly take their kit off while pruning.

Claire, a breast cancer survivor, said her illness, which resulted in a mastectomy, pushed to embrace her body.

Kendall, who practices mindful gardening,added that she can’t go fully in the buff because her garden is overlooked by neighbours – including  an elderly couple and teenagers.

Viewers enjoyed the segment, but few said they would be persudad to try naked gardening for themselves. 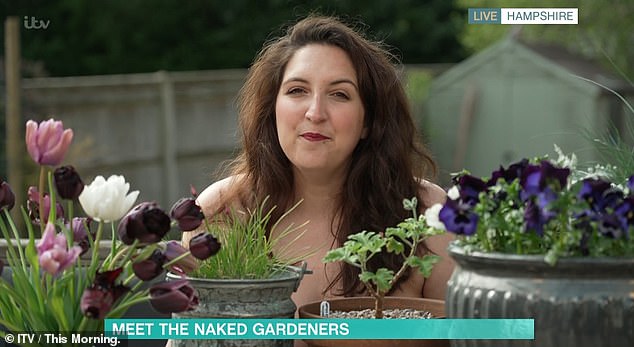 Two women bared it all on This Morning ahead of World Naked Gardening Day. Kendall Platt, pictured, said it was about reconnecting with nature

Not everyone was convinced by the segment, as some said they didn’t see the point of gardening in the buff

Claire, who lives with her husband, and has no children, said: I’ve always enjoyed getting my kit off and when the sun shines I love to be outside naked doing my garden.

‘It’s just embracing to feel the sun on your back and brushing against the plants,’ she added.

However, she admitted the practice could sometimes be hazardous, and that she has been stung on her bottom a few times.

‘I’ve add the odd accident when I’ve been stung, but that’s one of the hazards of gardening,’ she said. 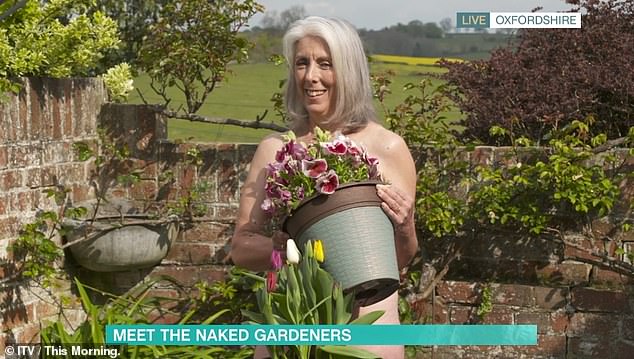 Claire Howard, from Oxfordshire,pictured, said she had always loved to ;take her kit off’ and loved to feel the sun on her skin in the summer

She reflected on her breast cancer diagnosis, saying how it pushed her to embrace her body even more.

‘I’ve always been fairly body confident but having breast cancer and a mastectomy, it made me realise it doesn’t matter what you look like. You have to embrace life and live it each day, and if it helps other people that go through cancer than its all good,’ she said.

Meanwhile, Kendal Platt said she also loves to be in the buff among her plants, but can’t always embrace her hobby fully.

‘I am overlooked in my garden, so I do join in on World  Naked Gardening Day,’ she said. ‘But the rest of the year, obviously not in the winter but in the summer, when the sun is out, I do garden in my bikini.

I wouldn’t want to make other people uncomfortable, and I do feel similar to Claire, I love the feeling of the sun on my skin,’ she added. 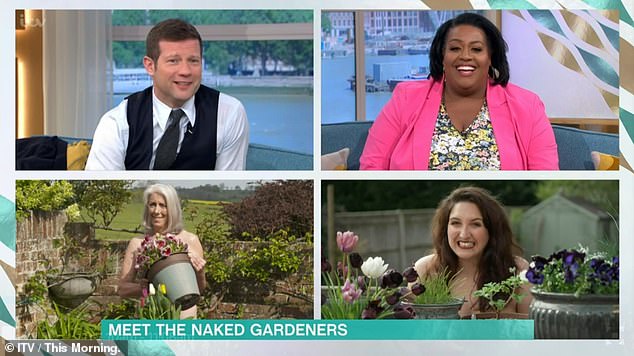 Claire and Kendall, bottom left and right, told presenters Dermot O’Leary and Alison Hammond, that they would be taking part in the celebration of naked gardening tomorrow

‘I help other women, teaching them how to mindfully garden. For me, it’s about that connection with Mother Nature and connecting with myself and integrated my body and myself with nature.’

Probed by Dermot, Claire revealed her husband, who was ‘very different’ from her, didn’t enjoy gardening in the buff.

‘He’s not one for taking his clothes off like me,’ she said, adding, ‘he always complains there’s too many flies about.

Kendall encouraged others to join in on the fun tomorrow, saying: ‘You don’t have to go the whole hog if you don’t want to.

She encouraged people to ‘prune some plants, sow some seeds in the buff,’ and to  and ’embrace getting out in nature and enjoying that connection and slowing down,’ she said.

While the two women looked perfectly comfortable in their own skin, This Morning viewers were not sold on the idea of taking their kit off in the garden. 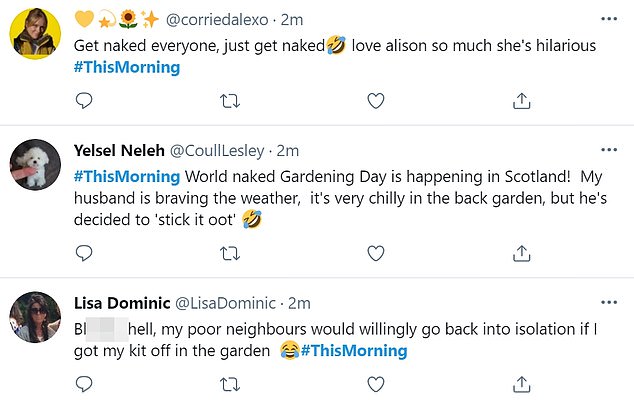 While some viewers said they loved Alison Hammond’s enthusiastic ‘let’s just get naked,’ some said they wouldn’t be taking part and would keep their clothes on tomorrow

‘But why would you wanna garden naked. Bending over showing your bare a** to the neighbours sounds like a lot of fun,’ one asked.

‘B***** hell, my poor neighbours would willingly go back into isolation if I got my kit off in the garden,’ another said.

But some people enjoyed the interview, and even said they would be taking part with Claire and Kendall.

‘Get naked everyone, just get naked. love alison so much she’s hilarious,’ one said.

‘World naked Gardening Day is happening in Scotland! My husband is braving the weather, it’s very chilly in the back garden, but he’s decided to ‘stick it oot’,’ another wrote.