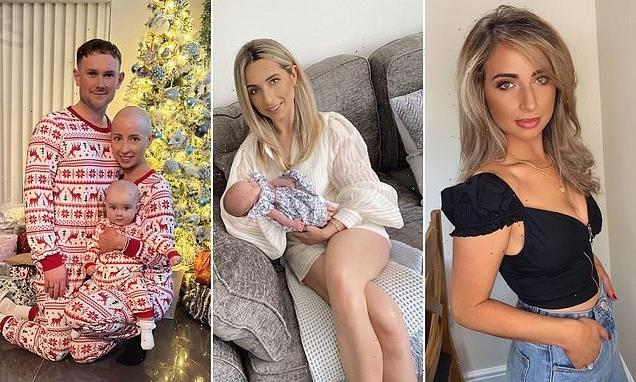 Mother, 26, whose migraines and night sweats were dismissed as a pregnancy symptom reveals how grapefruit-sized tumour between her lungs almost suffocated her

A mother whose migraines were dismissed as ‘pregnancy symptoms’ by doctors reveals how a grapefruit-sized tumour that could have suffocated her was found just weeks after she gave birth.

Kirsty Axworthy, 26, from Blairgowrie, Perthshire, was around 12 weeks pregnant when she began experiencing high blood pressure, migraines and night sweats, which doctors believed was due to pre-eclampsia.

However, her symptoms continued to worsen after the arrival of her daughter Elle in May 2021. 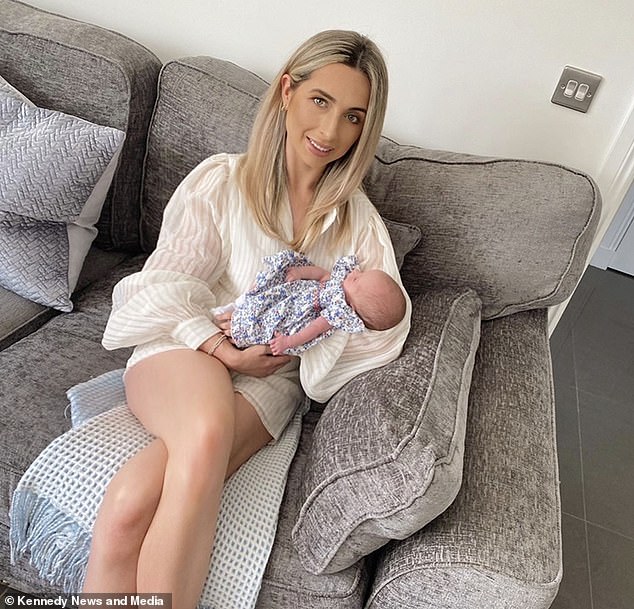 Kirsty Axworthy, 26, (pictured) from Blairgowrie, Perthshire, has revealed she is in cancer remission after being diagnosed with the disease just months after giving birth 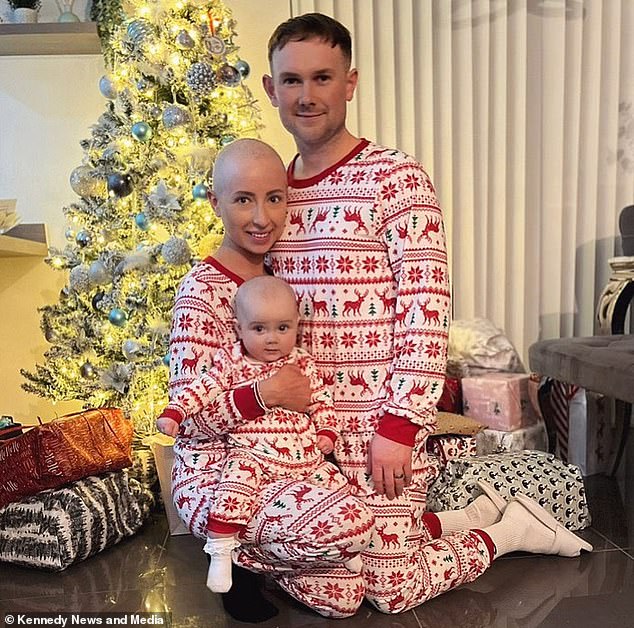 Kirsty began to experience migraines, high blood pressure and night sweats from around 12 weeks into her pregnancy. Pictured: Kirsty with husband Gary and daughter Elle

The sales executive for new build houses has since had chemotherapy to shrink the 13cm ‘ticking-time-bomb’ tumour located in her mediastinum – the area that separates the lungs.

She credits her 11-month-old daughter who she describes as a ‘wee miracle’ for giving her ‘something to live for’ while undergoing her gruelling treatment.

Kirsty who has been in remission since January, is now passionate about raising awareness of Non-Hodgkin’s Lymphoma and urges anyone who may have any potential symptoms to visit their GP.

Kirsty said: ‘The doctor said that if I didn’t get it out and it carried on growing I probably would have ended up suffocating. My lungs would have just collapsed because of the area it’s in and it’s a fast-growing, aggressive form of Lymphoma.

‘He said that if I didn’t start chemotherapy in the next couple of weeks, I don’t even know how long I would have to be honest.

‘I’m really lucky that it was caught in time. It was like a ticking-time-bomb. It’s quite scary actually. 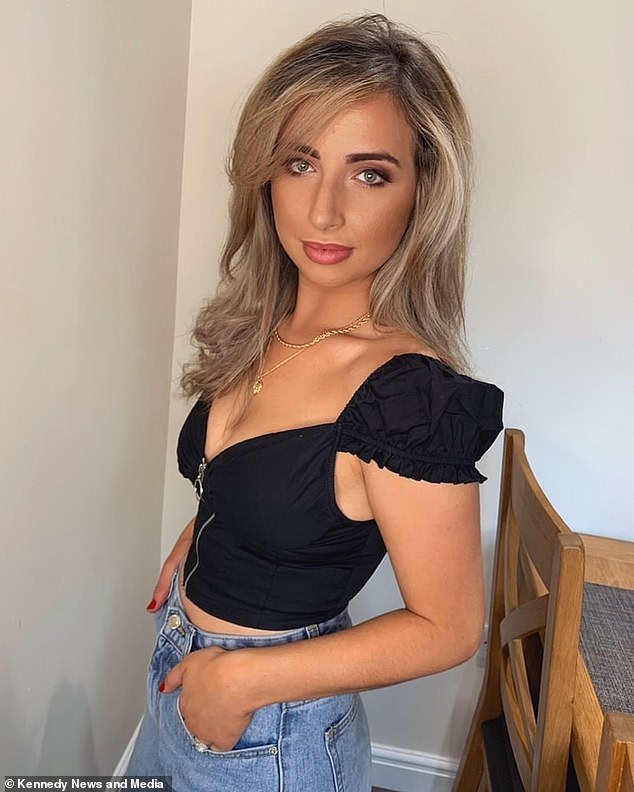 ‘The tumour was around 13cm when I was diagnosed and they said it was about the size of a grapefruit.

‘That’s obviously why I was getting shortness of breath, because it was pushing against my lungs.’

Kirsty said from around 29 weeks pregnant she was in and out of hospital with her symptoms which she claims were ‘misdiagnosed’ as preeclampsia.

WHAT IS HODGKIN’S LYMPHOMA?

Hodgkin’s lymphoma is a type of cancer that starts in the white blood cells.

It affects around 1,950 people each year in the UK.

A common early symptom is having a painless swelling in the armpits, neck and groin.

It has been linked to people with lowered immunity, a family history of the condition, smokers and those who are overweight.

Treatment may include chemotherapy, radiotherapy, steroids and stem cell or bone marrow transplants.

Kirsty said: ‘Very early on in the pregnancy about maybe 12 weeks I started getting migraines with aura but without the headache. It was like this visual disturbance every couple of days where my eyesight would go for about an hour.

‘I had high blood pressure, was getting night sweats and itchy skin.

‘My skin was also sore to touch as well. It was like I needed to go for a hot bath and I was just really really tired constantly.

‘I wasn’t too sure what it [itchy skin] was. I think when you’re pregnant and because it was my first pregnancy, I just put everything down to pregnancy because it’s new and I’d never experienced that before.

‘I was induced at 35 weeks as things were getting quite bad and my blood count was doubling. I think that was also a misdiagnosis of preeclampsia, but it was obviously the lymphoma the whole time.’

The mum-of-one said another symptom that she had was unexplained weight loss despite eating well and having cravings throughout her pregnancy.

Kirsty said: ‘I was really really exhausted as well but because Elle was premature and I was up a few times during the night feeding and things, I just put things down to being a new mum really.

‘And then it was about three or four weeks after I had her I started getting all these really visible veins on my chest from my breast up to my neck and over the tops of my arms.

‘I just put that down to post-pregnancy, it’s quite a normal thing to have that, especially over the breast area. 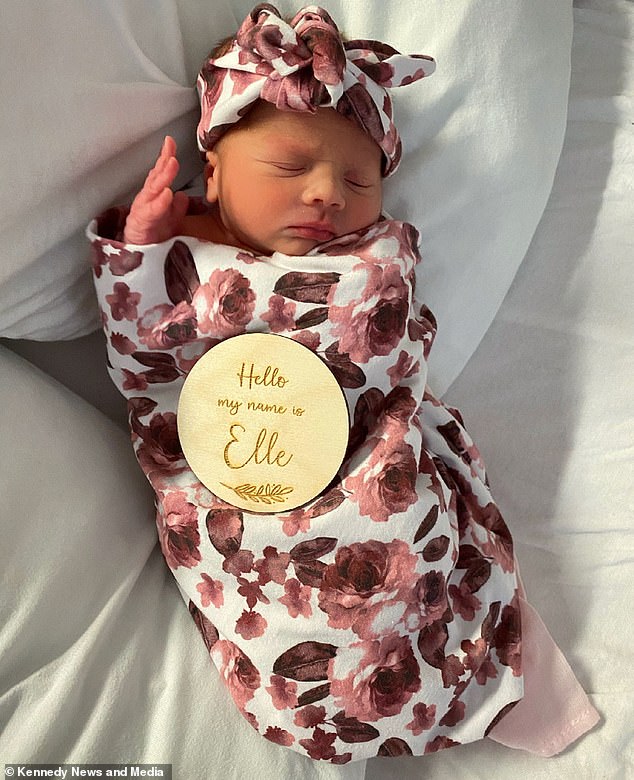 Kirsty said she put her exhaustion down to being a new mother but decided to go to her GP for a check-up after her face became red and puffy. Pictured: Kirsty’s daughter Elle

‘After I gave birth and my visual disturbances kept happening, because they put that down to preeclampsia as well, this is when alarm bells started ringing as I thought things would start to be cleaning up by now.

‘And I started getting breathless as well when I was walking. I live at the top of a hill which is maybe 400m and I was walking up there with the pram and I had to stop half way, I just couldn’t breathe.

‘I was always so fit and healthy and it wasn’t like me. Obviously, it takes a while to bounce back after giving birth, but I just knew that something wasn’t right.’

Kirsty had a red and puffy face when she visited her GP who referred her to hospital, where she received her life-changing diagnosis the following day.

She started chemotherapy a fortnight later, which involved six rounds, but contracted pneumonia when she was halfway through.

Kirsty said: ‘I literally went from being pregnant, to giving birth and then seven weeks later being diagnosed with cancer and having to deal with chemotherapy. It was just so difficult. 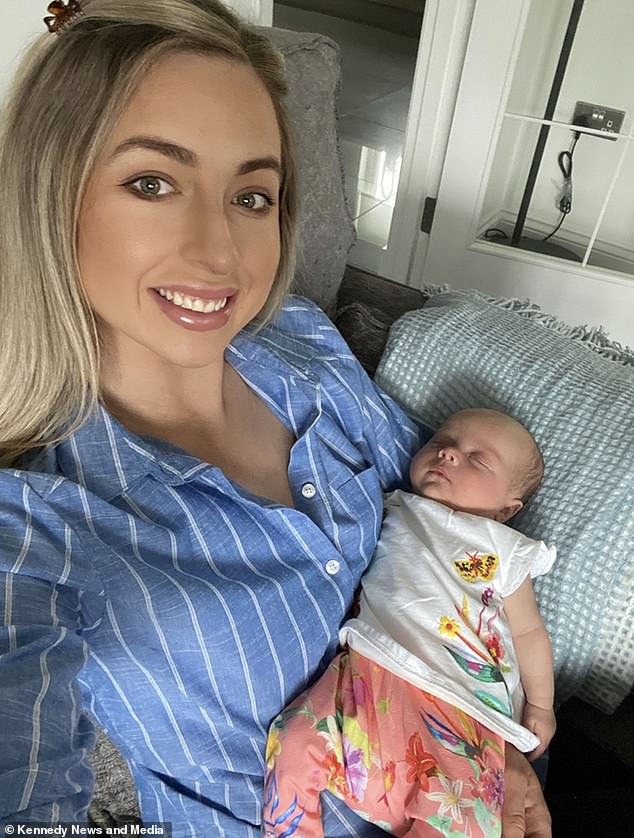 ‘I was in complete shock and denial at the start and was like ‘you must have it wrong?’

‘I Googled things and was worried about a blood clot in my lung because my symptoms were coming up as that.

‘When they told me I had a cancerous tumour in my chest, the first couple of days I was just in complete shock and didn’t really cry or anything and then the week after that it sort of hit me when I came home and started chemotherapy.

‘It was incredibly difficult. Things that I wanted to do myself, sometimes I couldn’t. I was relying on family and friends to help out.

‘It’s hard enough going through chemotherapy at any stage but when you’ve just given birth and that’s supposed to be such a special time. It just felt so unfair.’ 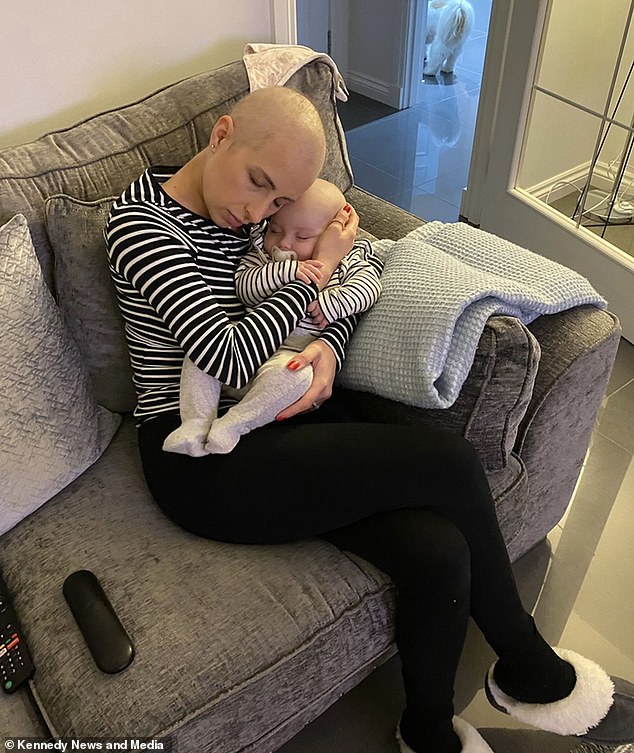 As of January, the avid runner has now been in remission and no longer has active signs of disease on her tumour.

Kirsty said: ‘I have my husband and he’s amazing, as well as my family and friends, but I think that Elle definitely just gave me that extra push.

‘Especially times where I was in hospital for longer periods, like when I had pneumonia. I was so weak and mentally and physically drained.

‘She was something to live for really, that’s the bottom line. I knew I had to get home and get better for her.

‘Before I had Elle I had a miscarriage about eight weeks before I found out I was pregnant with her and I was going to wait a year before trying again.

‘So because I’ve been through chemotherapy there is a risk that I’m now infertile and I might not be able to have any more kids, so if we had waited, we may not have been able to have any at all. 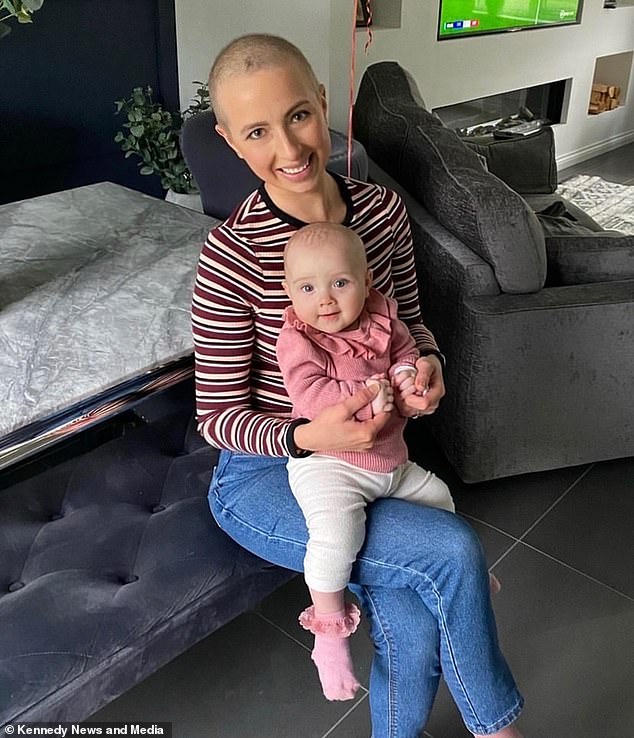 Kirsty, whose daughter is now 11-months-old, has created an Instagram account to raise awareness of Non-Hodgkin’s Lymphoma

‘She really is a wee miracle in that way because we didn’t expect to fall pregnant so quickly again.

Kirsty has created an Instagram account dedicated to raising awareness of Non-Hodgkin’s Lymphoma which has amassed more than a thousands followers.

Kirsty said: ‘If there’s anything that you’re worried about at all, go to the doctors.

‘I know how busy day-to-day life can be, especially for mums. You think you don’t have time to go to the doctors if there’s something wrong.

‘But with these things, and especially with my example because it was so fast-growing and aggressive, you really have to catch these things quickly because if they spread it just makes it so much more difficult to treat.

‘If you think there’s something not right, doctors can put a lot of things down to anxiety and just give you tablets to mask things, but you really have to get to the root of the problem, that’s key.