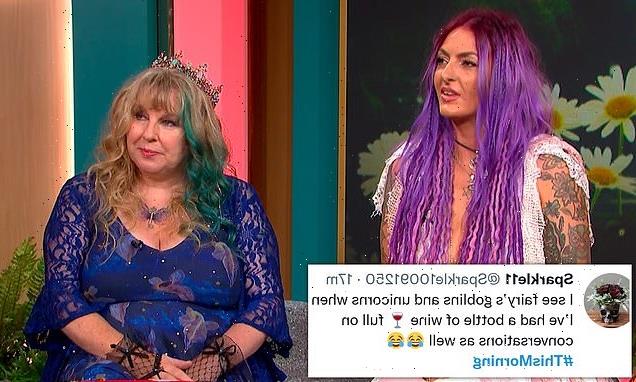 This Morning viewers were baffled by two members of the ‘fairy community’ who appeared on the show to speak about how to connect with the mini magical creatures.

UK-based Karen Kay and Danielle were dressed in their fairy finest, sporting wings and eccentric jewellery, and told presenters Rylan Clark and Ruth Langsford how they ‘communicate with and see fairies’ and said ‘fairies were all around them.’

Twitter users commended the presenters for ‘keeping a straight face’ but Rylan said he was ‘open minded’ and wanted to know how he could get in touch with a mystical being himself. 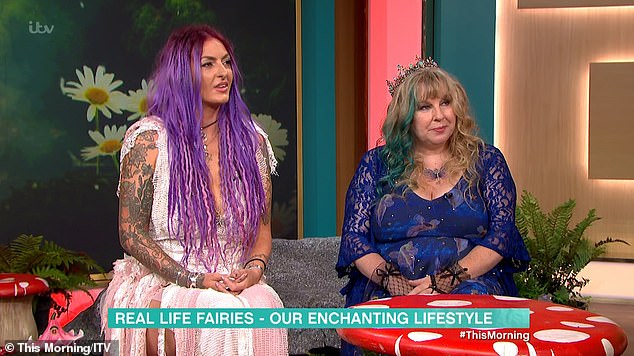 The presenter was then told to close his eyes by Karen and imagine a gold road and at the end of it a golden fairy door and a golden key, and upon opening the door a large oak tree.

When Rylan and Ruth could ‘visualise’ the tree, Karen told them to chant ‘fairies, fairies, come to me as I sit beneath this tree.’

Karen asked them if they felt any ‘vibes’ or ‘twinges’ a ‘sure sign that fairies were near’.

Danielle said: ‘For me it all started when I took time out to connect with nature and then I began to see the faces of fairies in trees – they live in a different realm to us.’

Ruth asked: ‘Do you feel there is a fairy in here?’

Danielle replied: ‘There’s a lot of lights in here but they are everywhere, as fairies are with us because we spread their message. 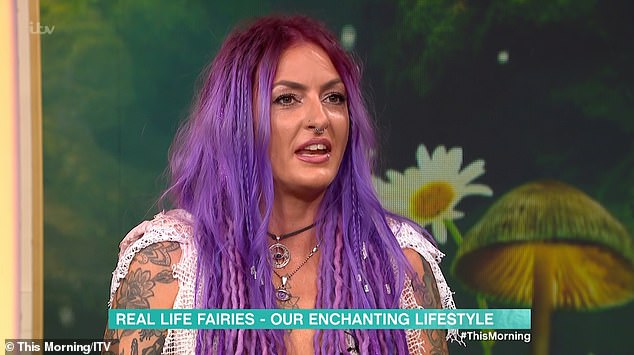 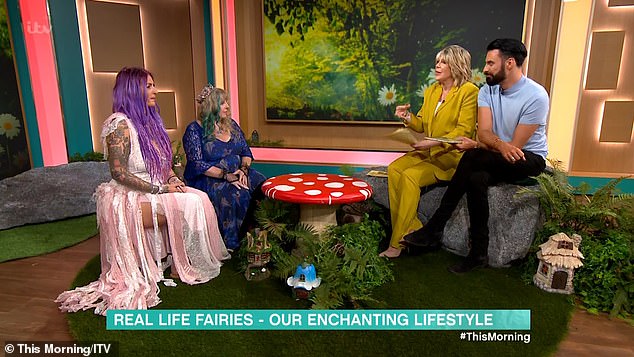 Dressed in their fairy finest, Danielle and Karen give Ruth and Rylan a walkthrough on how to contact a fairy through consciousness and viewers took to Twitter to say ‘I don’t know how they kept a straight face’ 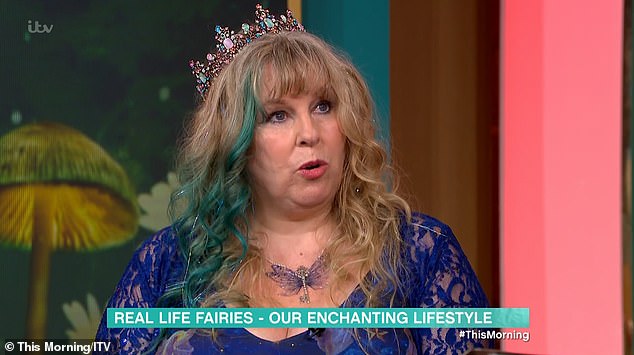 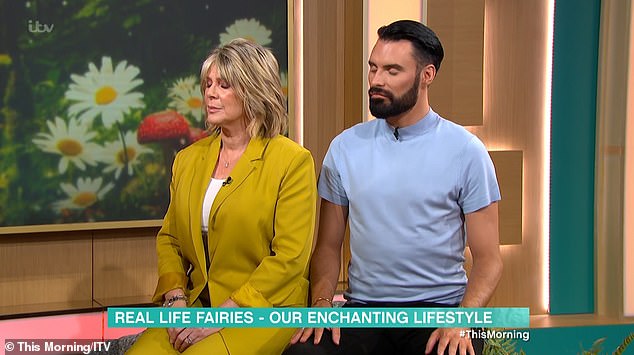 ‘People say seeing is believing and that is limiting. Every plant has fairy energy.’

Karen, who also organizes popular fairy festivals all over the country says that she shares the ‘messages of the fairies’ who say to love and care for the environment.

She also says that she just can’t ‘hide her mermaid DNA’ when out and about and ‘whispers to mermaids’.

However not all viewers are convinced.

One person said: ‘Can’t hide my fairy DNA. This Morning is on fire today.’

A tweet said: ‘This is a bad acid trip’ 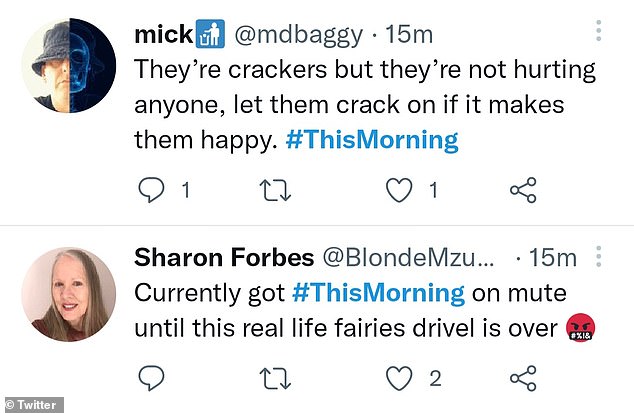 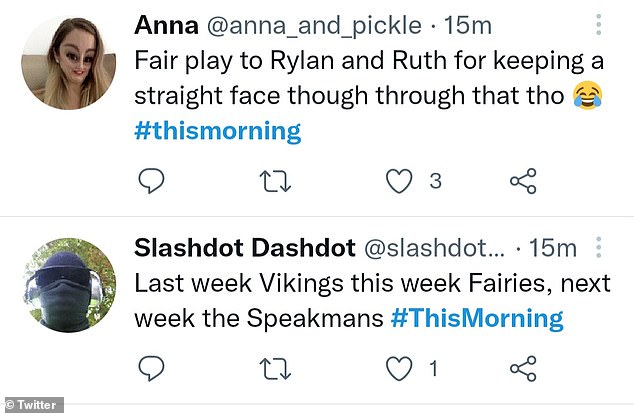 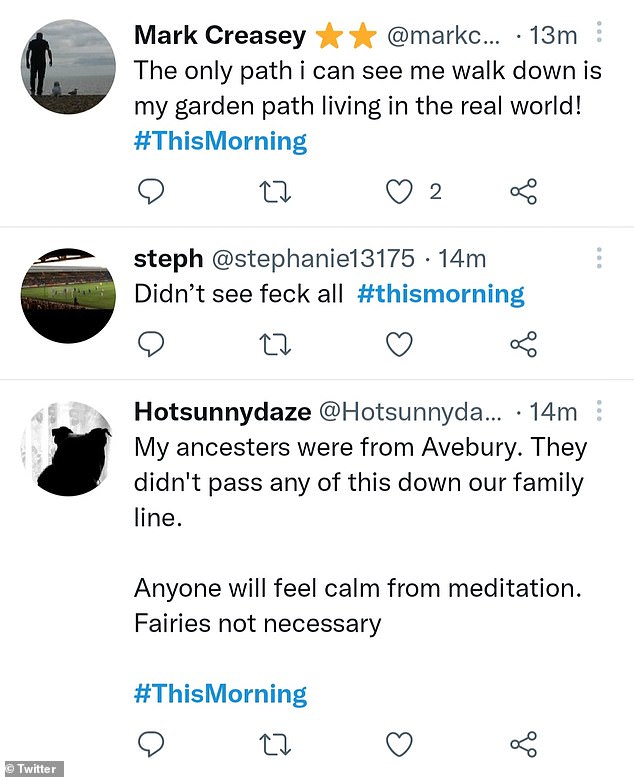 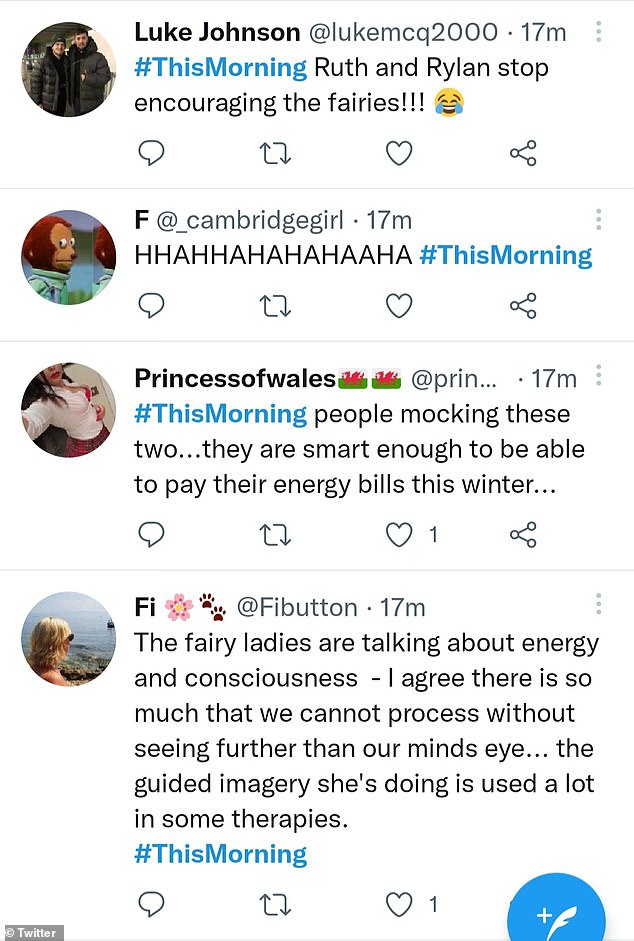 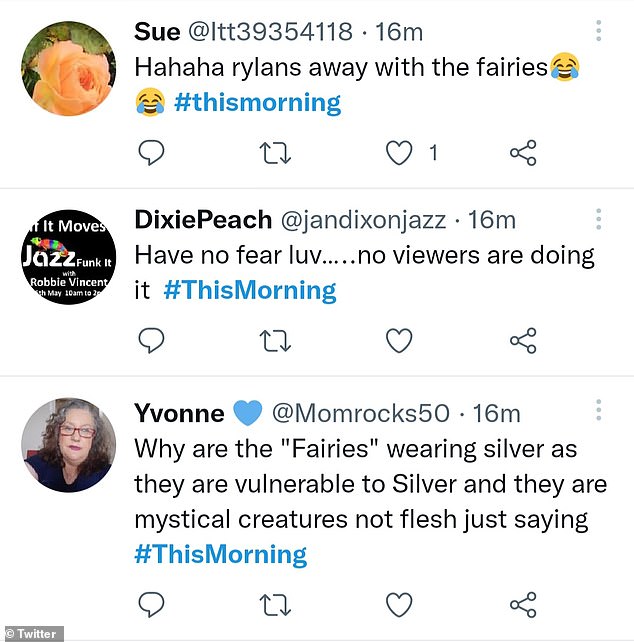 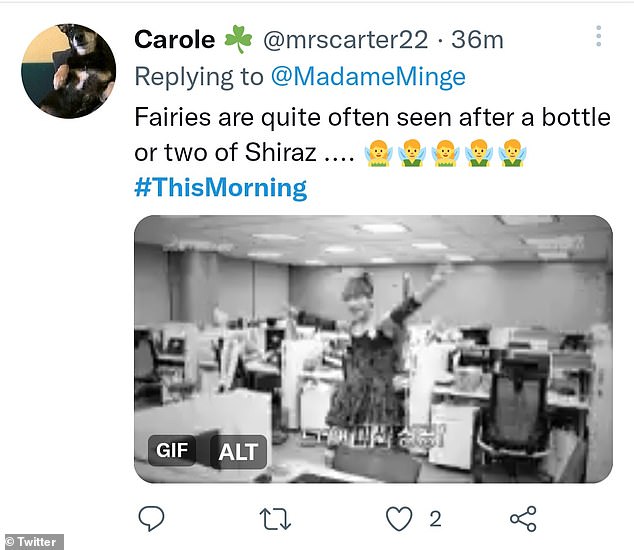 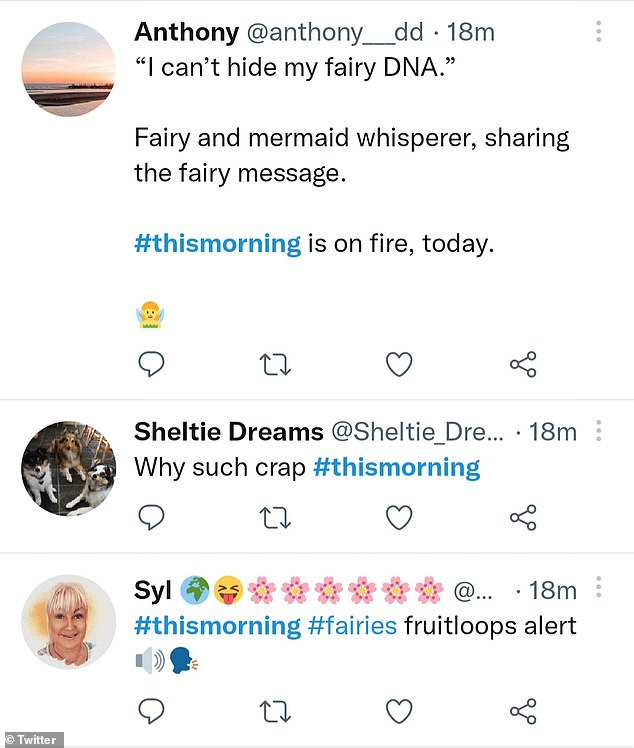 Another Tweeted: ‘Surely this is a wind up?’ As Karen shared she ‘couldn’t hide her fairy DNA’ and professed to be a mermaid whisperer.

Not all reactions were negative, some viewers were genuinely curious and shared some mystical wisdom of their own.

A woman said : ‘ The fairy ladies are talking about energy and consciousness- I agree there is so much we cannot process without seeing further than our mind’s eye… the guided imagery she’s doing is used a lot in some therapies.’

Someone went so far to say that ‘fairies are traditionally malevolent and they like to “mess with humans” including stealing babies.’

One woman was bemused as to why Karen and Danielle were wearing silver saying ‘fairies are vulnerable to silver.’

Someone said they were ‘smart enough to pay their energy bills this winter’ by hosting UK wide events that attract thousands.

One person called the segment ‘drivel’ yet another piped up saying ‘they’re not hurting anyone.’