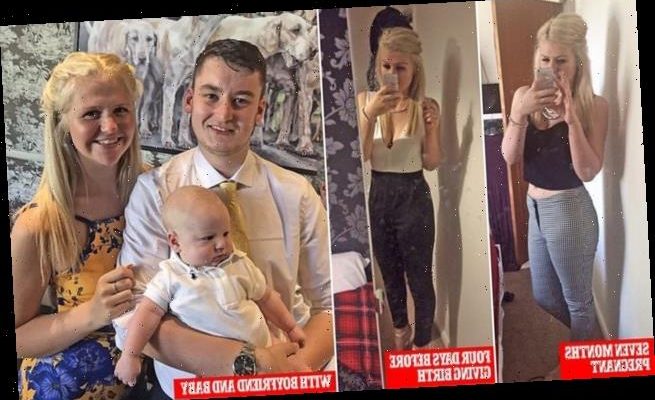 Mother, 27, reveals she didn’t know she was pregnant until she was giving BIRTH to her son on the kitchen floor because she had no bump, was on the Pill and still fit her size 10 clothes

A woman has revealed how she didn’t know she was pregnant until she was giving birth to her baby boy on the kitchen floor.

Throughout her pregnancy Claire Wiseman, 27, from Oxford, was able to slip into her size 10 clothes, continued to bleed every month, had no bump and had been on the Pill while having sex with her boyfriend Ben Honey, 24.

It wasn’t until she was doubled over with what she thought were period cramps in April 2018 that her mother asked if she could be pregnant.

‘I told her that there was absolutely no way. I was on the Pill and had been having periods,’ Claire, who is also mother to daughter Millie, recalled. ‘But as I put my hand between my legs, I felt a head. I was in so much shock.

‘Suddenly, Mum was screaming hysterically for me to push. Minutes later, I pushed a baby out of me and Mum said it was a boy. It was all so surreal.’

Baby Finlay, now two, was born weighing 7lbs 11oz on the kitchen floor before mother and daughter were taken to John Radcliffe Hospital where they were joined by Ben. 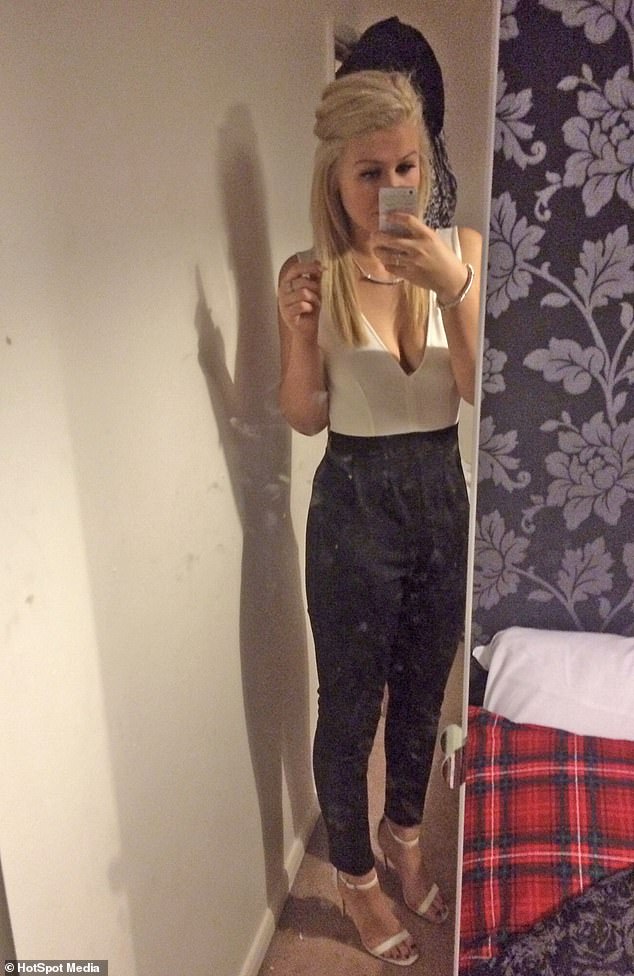 FOUR DAYS BEFORE GIVING BIRTH: Throughout her pregnancy Claire Wiseman, 27, from Oxford, was able to slip into her size 10 clothes, continued to bleed every month, had no bump and had been on the Pill while having sex with her boyfriend Ben Honey, 24 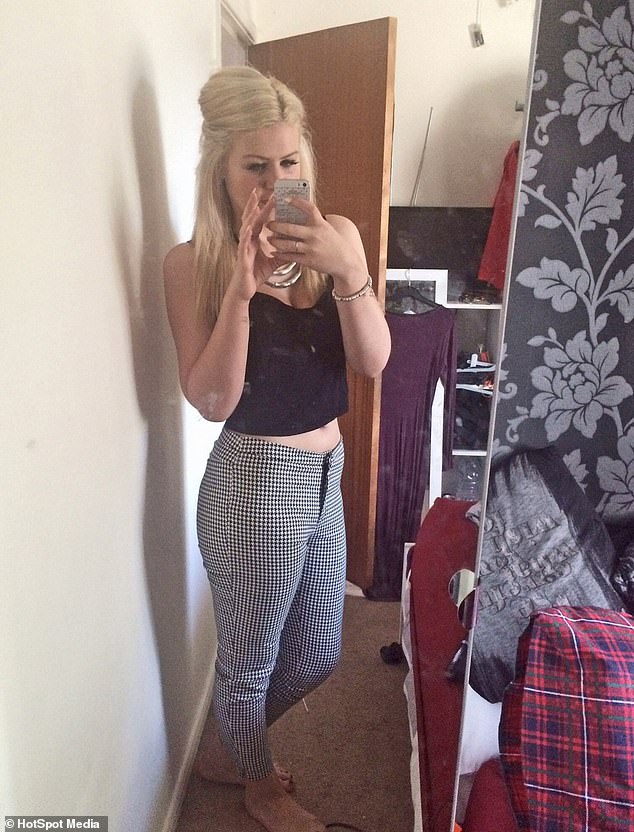 SEVEN MONTHS PREGNANT: Claire at seven months pregnant, when she was still slipping into her size 10 clothes and had no visible bump. Baby Finlay was born in April 2018 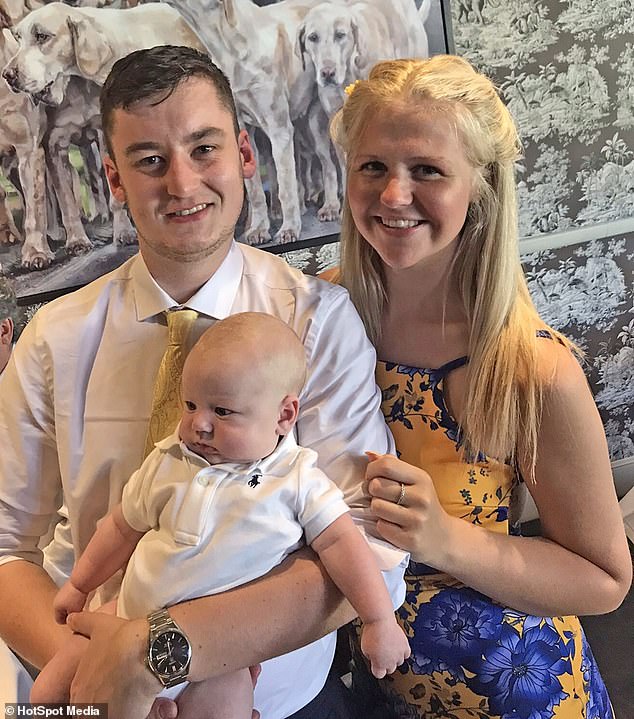 Claire and boyfriend Ben had no idea they were expecting their first child together. Pictured, the mother and father with baby Finlay at two months old. Their son is now two 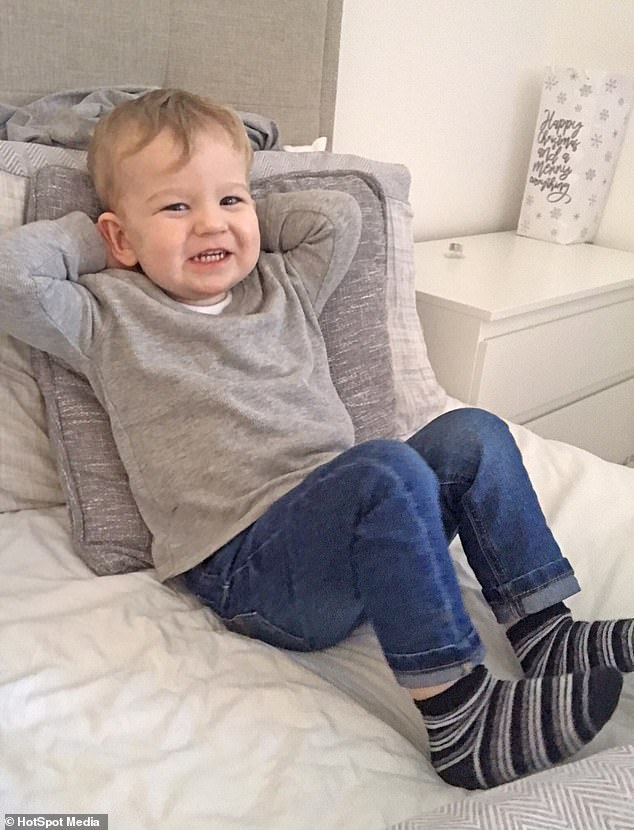 Claire described Finlay, pictured recently, as the ‘surprise that made their family stronger’

Claire, then 25, and Finlay were both given a clean bill of health.

Claire, who owns her own hair accessories company, and Ben met at the pub where they both work in 2016 and became a couple the following June.

As they both lived with their parents, they took turns visiting each other’s homes in Oxford. Every weekend they enjoyed nights out with their friends.

For Claire’s 25th birthday in April 2018, she organised a crazy golf night with her friends and family.

She said: ‘I wore a tight top, fitted jeans and heels. I was lucky to be a size 10 and that my figure had quickly bounced back after having Millie.

‘That night, I drank several glasses of white wine and passion fruit martinis and had an amazing time. Days later, on my birthday, Ben and I had loads of wine at a fancy restaurant.’ 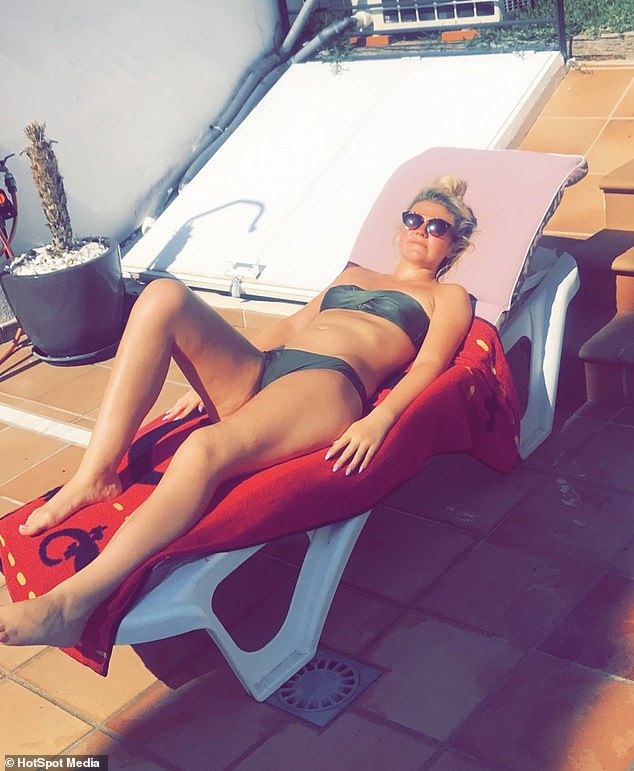 FOUR MONTHS PREGNANT: Claire continued to drink and socialise with friends throughout her pregnancy, unaware that she was expecting her first child with boyfriend Ben 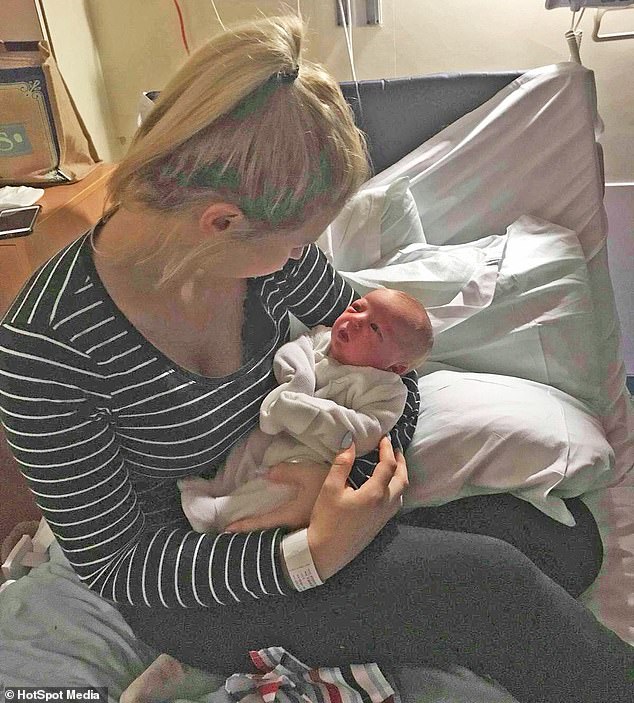 Shocked: Claire said that she and Ben ‘deliberated for hours about adoption and other options’ after the surprise birth but 12 hours later when she agreed to see her baby, she fell in love with him. She said that ‘all her worries went away’ and ‘he was the sweetest little boy’ 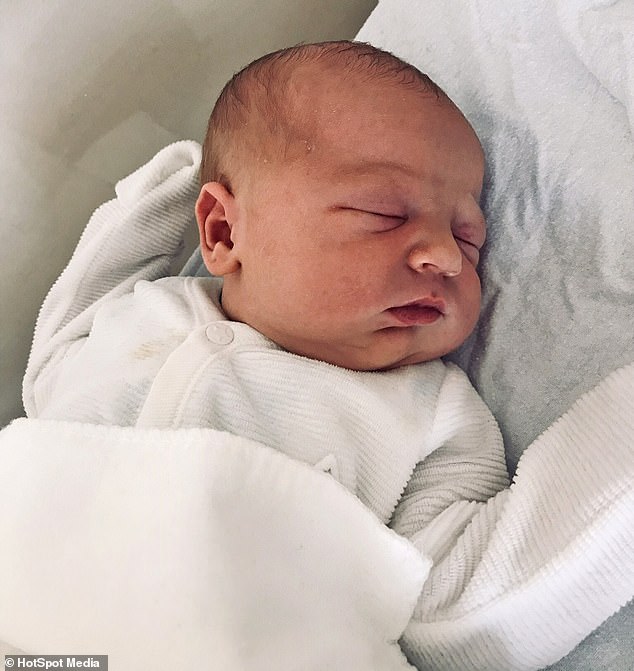 Baby Finlay pictured shortly after his birth in April 2018. He was born weighing 7lbs 11oz on the kitchen floor before mother and daughter were taken to John Radcliffe Hospital 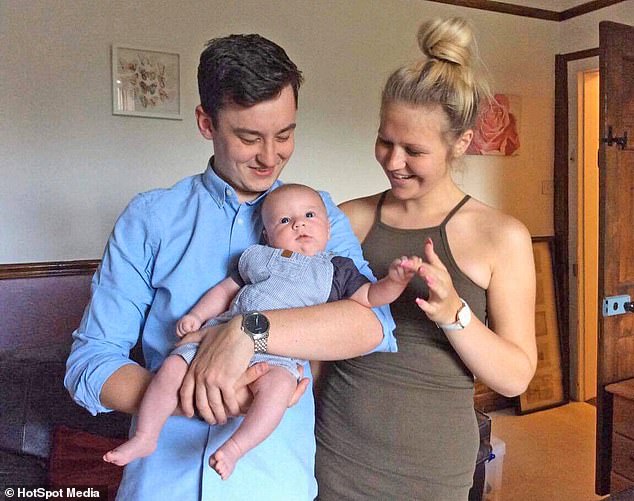 Claire and Ben with baby Finlay, then two months old. Claire said her and Ben ‘burst into tears’ when they laid eyes on each other for the first time after she had given birth to their son

She continued: ‘I had to pick up Millie from her dad’s, so I took a paracetamol and went to get her.

‘After I got home, I put Millie down for a nap and the pains got even worse. I thought it must’ve been period pains. I had to go and lay down.’

But 20 minutes later, Claire woke up in agony.

Worried, she phoned her mother, Angie Southam, 57, a store manager. When she arrived home, Claire was sat on the toilet, doubled over in pain.

Claire said: ‘I kept feeling this need to push but didn’t understand why. Mum immediately called 999 and the operator said an ambulance was on the way.

How common are cryptic pregnancies?

One in 450 pregnant women in the UK don’t know they are going to have a baby until week 20 of their pregnancy (half-way through), and one in 2,500 women are oblivious to the fact until they go into labour.

It’s a phenomenon known as cryptic pregnancy – also referred to as ‘pregnancy denial’.

Cryptic pregnancies typically affect either young women, who have never experienced a pregnancy, or women who believe they’ve gone through the menopause and who choose not to use contraception.

Women with erratic menstrual cycles are also more likely to miss signs they are expecting. This is especially true among women with polycystic ovary syndrome (PCOS), where small cysts grow on the ovaries; the hormone imbalance often leads to irregular or non-existent periods.

Yet there are some women who will continue to have monthly bleeds throughout their pregnancy. In this case, a scan at the local GP may be the only method of confirmation.

Women may simply not expect to find they are pregnant if they are taking the Pill – but then those taking it religiously can still become pregnant.

Eight in 100 women can get pregnant while on the Pill – usually not because of problems with the Pill, but with the taker, either because they’ve missed the Pill, thrown up or had diarrhoea.

‘After a few minutes, I told Mum I needed to lay down, so she put some cushions on the kitchen floor and I laid on top of them…

‘Suddenly, Mum was screaming hysterically for me to push. Minutes later, I pushed a baby out of me and Mum said it was a boy. It was all so surreal.’

‘Paramedics kept asking me to feed him but I refused. I couldn’t accept that it was my baby. I was in shock,’ she said.

Once at the hospital, Claire still struggled to accept that she had just given birth.

‘I was on the Pill, had periods and a flat belly. So no symptoms at all,’ she said.

‘I’d also been out drinking with my friends at pubs and clubs once a week I couldn’t understand how I’d carried a baby for nine months and had no idea. Thankfully, he was born healthy.’

At the same time Ben was at home, unaware that his girlfriend had just given birth to their baby. 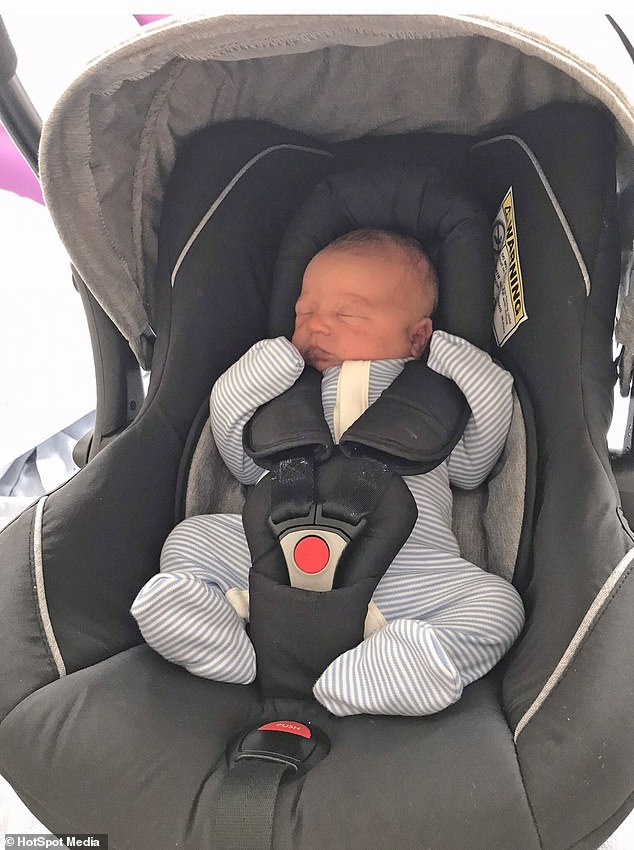 Claire told her mother there was ‘no way’ she could be pregnant as she was on the Pill and had been having periods, and was shocked when she felt between her legs and felt Finlay’s head. Pictured, Finlay at one week old after being taken home from hospital

Claire continued: ‘I didn’t know how to break the news. Eventually I managed to text him and tell him.

‘Ben called me and told me to stay positive and that everything was going to be okay. He then came to the hospital and when he saw me, we both burst into tears.

‘I told Ben I hadn’t laid eyes on our baby as I was too scared. I felt no attachment to our son. We deliberated for hours about adoption and other options.’

Twelve hours later, Claire finally agreed to see her baby. She said: ‘When I finally saw him, I fell in love. He was the sweetest little boy and all my worries went away.

‘Ben and I named him Finlay and we decided we could never let him go.’

Claire added: ‘Millie and Finlay are the best of friends. Finlay’s the surprise that made our family stronger and I couldn’t imagine life without him.’ 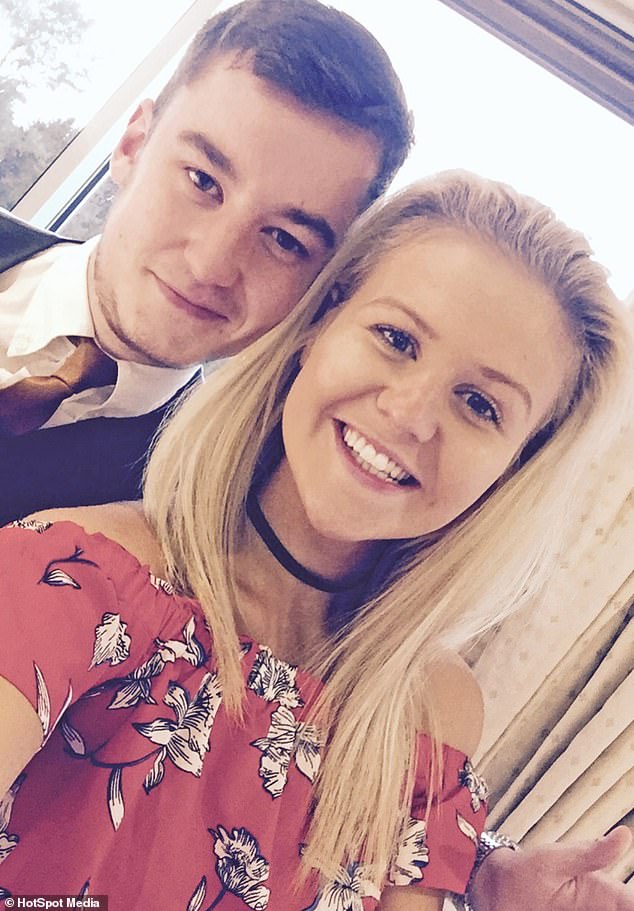 In March 2016, Claire, then a single mum-of-one to Millie, 4, met Ben Honey, 24, at the pub where they both worked. In June 2017, they became a couple and took turns visiting each other’s homes in Oxford as they both lived with their parents