Woman reveals how she got married for £400 by sewing her own skirt, buying decorations from charity shops and learning to bake a wedding cake from online tutorials

A blogger has revealed how she planned her entire wedding day for £500 by making the cake herself and sewing a skirt to wear at the ceremony.

Rosie Scott, 29, who lives in London, said trying to pull off the celebration became a ‘bit of a challenge’ to see how cheap she and husband Aaron Piper could do it.

The crafty bride managed to keep costs to a minimum by watching tutorial videos online to learn how to bake the cake and buying decorations in charity shops.

She even asked her parents to bring back cheap wine for the big day after a holiday to France and used a staff discount to buy a floral dress to wear at her reception. 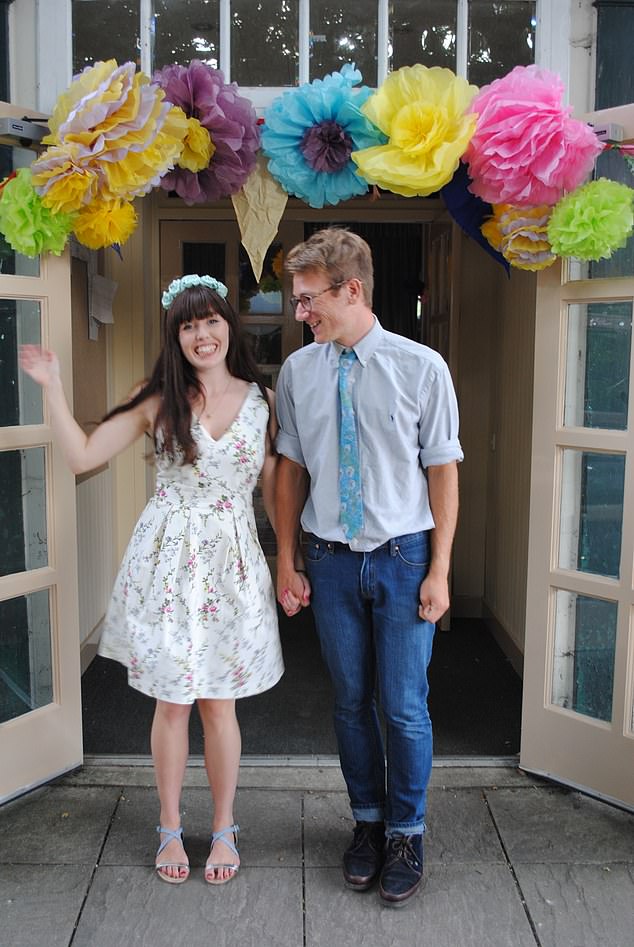 Rosie Scott, 29, spent less than £500 on her wedding to Aaron Piper, pictured together, by not wearing a traditional dress and making her own decorations such as paper flowers 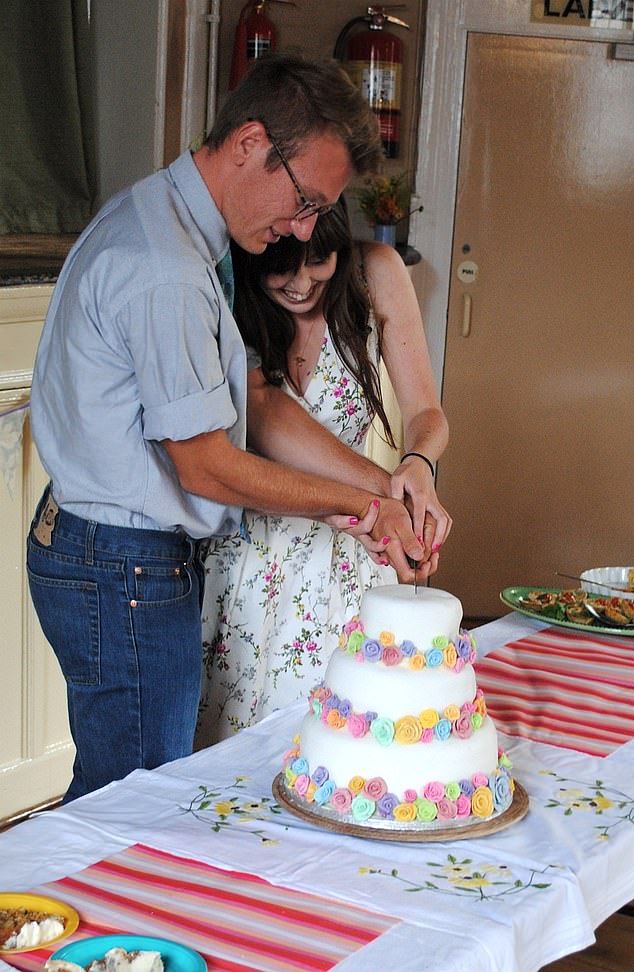 The crafty bride, pictured with husband Aaron, also saved on her cake and only spent £40 as she asked her sister to make it and watched tutorial videos to learn how to do a three-tier cake

It was recently revealed that the average wedding in the UK now costs £30,355 with happy couples often shelling out around £523 on the cake alone, according to Stork.

To try and help combat the high cost of having a wedding, the baking brand has launched a limited-edition DIY ‘bake by numbers’ cake kit for £49 on Amazon.

Included in the kit is everything needed to bake including all the ingredients, faux flowers for decoration and even a wooden spoon.

Rosie explained how she asked her sister to make a Victoria sponge cake with coloured icing flowers for her wedding celebration party on September 1 in 2013. 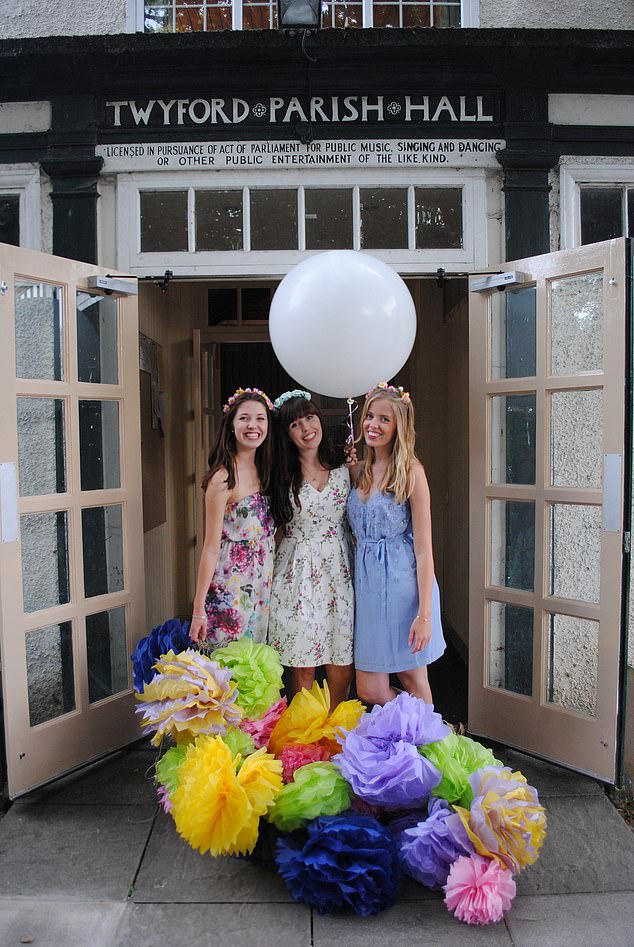 Rosie, pictured centre with two friends, used her staff discount to get a pretty floral dress for the day at a bargain price of £20 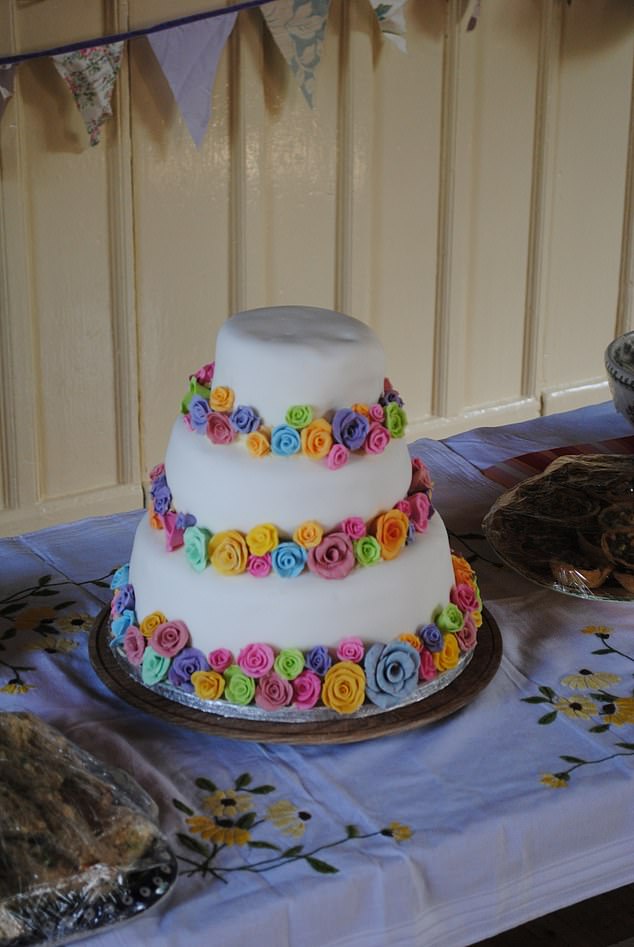 Rosie and her sister placed colourful roses at the base of each tier on the cake, pictured, to hide any imperfections. She said that everyone ‘loved’ how ‘pretty’ the cake turned out to be

She said: ‘I asked my sister because she’s great at baking, but she’d never made a multi-tiered cake so we watched tutorial videos together to work out how to do it.

‘We decided to just put colourful roses around the base of each tier – they hid any imperfections and were also a super simple way to make a big visual impact.

What did Rosie spend?

Fabric for skirt I wore at the official ceremony: £30

‘The roses were made just with icing and food colouring then each petal was pressed out with a finger and thumb.

‘Nothing fancy needed at all! Everyone loved how colourful and pretty the cake was and they couldn’t believe my sister had made it herself.’

Rosie also made all the decorations for the wedding party, held a couple of weeks after her official ceremony on August 16, herself.

She said: ‘I made loads of paper pom poms to decorate the hall with and lots of paper flowers to go in jam jars on the tables – my mum had been saving them throughout the year.

‘My house was covered in tissue paper for weeks! I also made the invitations with pretty pressed flower paper, tied up with string and a button.

‘For the actual wedding day I sewed myself a skirt made with Liberty fabric that my then-fiance had bought me. My friend sewed my husband a tie which he wore too.’

At the wedding party with friends, Rosie managed to get a beautiful floral dress for a fraction of the price due to her staff discount. 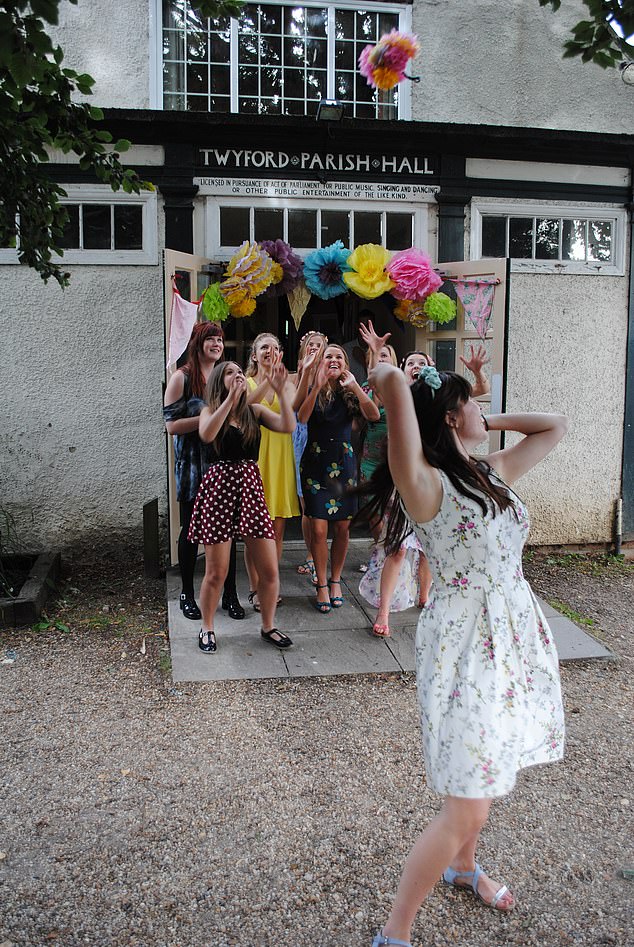 Blogger Rosie, pictured throwing her flowers on her wedding day in 2013, kept costs to a minimum by holding the reception at a village hall as well 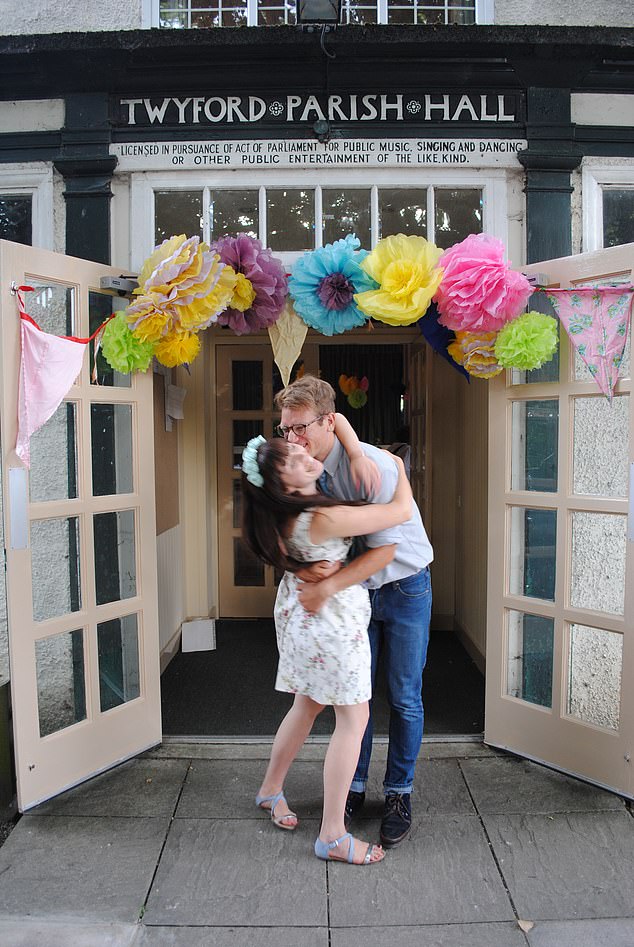 Rosie and Aaron, pictured, were about to become post-graduate students when they married and said keeping costs down became ‘bit of a challenge’ to see how cheap they could do it

She said: ‘I was working as a sales assistant at Monsoon at the time so used my 70 per cent discount to get one of their dresses.

‘It wasn’t a wedding dress but was white with a floral print so semi-bridal.’

Rosie said at the time of her nuptials she and husband Aaron were about to become post-graduate students and were quite short of money.

This caused them to think outside the box when it came to planning and they got inspiration online from sites such as Pinterest and Instagram. 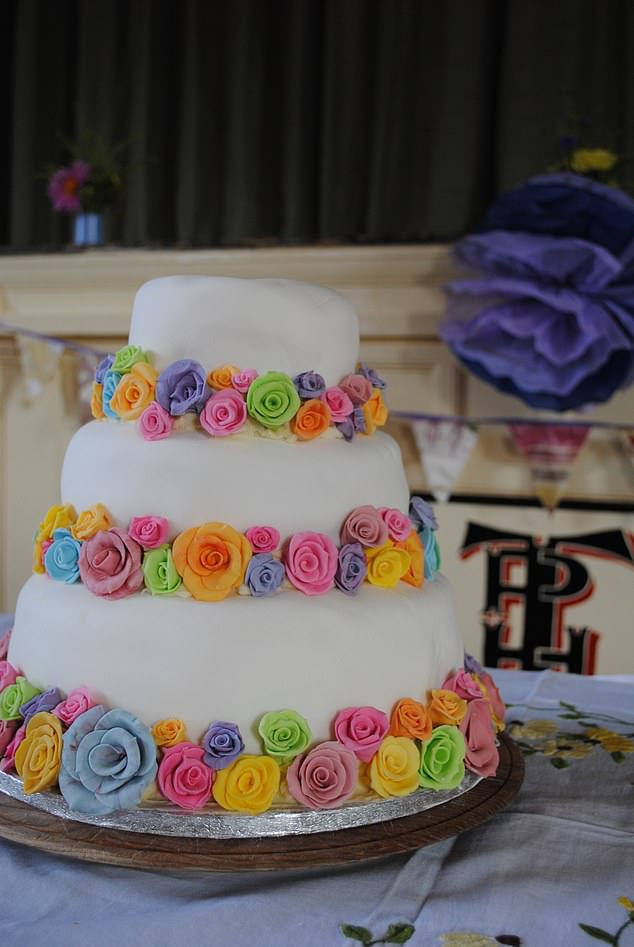 As well as the cake, pictured, the couple made all the decorations for the reception including paper pom poms to decorate the hall and lots of paper flowers to go in jam jars on the tables

Rosie said: ‘I’d just started a craft blog at the time so was really inspired by lots of other crafters and online tutorials that I’d seen.’

Another way Rosie saved money was by choosing a non-traditional venue for the celebrations, something which she recommended other brides think about doing.

She said: ‘Look for alternative venues that might not market themselves as places for wedding celebrations. 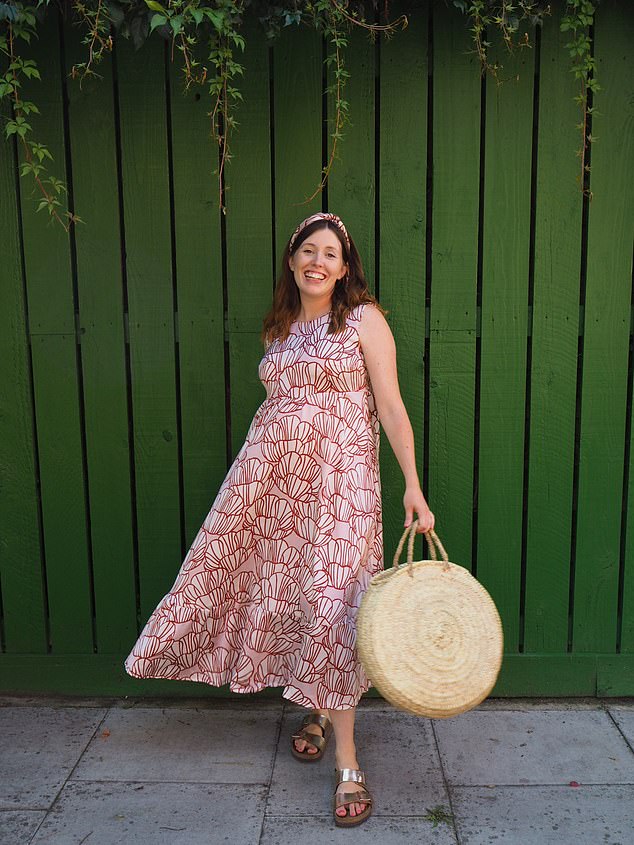 Rosie, pictured recently, runs a craft blog and had just started it when she got married. She said this gave her lots of inspiration to make her own things

‘Our local village hall was actually really pretty and was only £100 for the day.’

Rosie also recommended sending invitations by email rather than by post as you  can ‘save loads of money on postage as well as on the invites themselves’.

Another top tip was to save money on a DJ and ask guests in advance for a couple of their favourite floor-fillers to add to a playlist for the day. 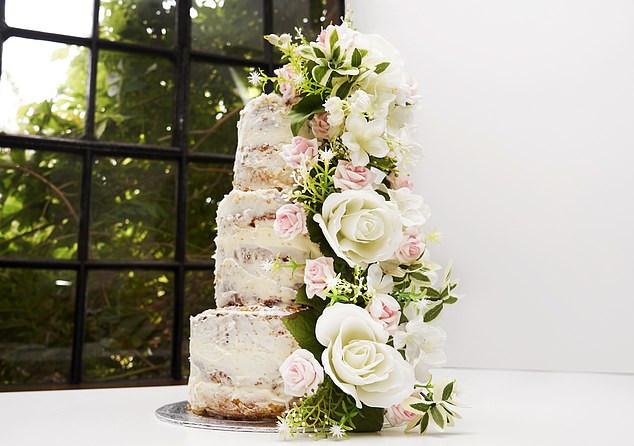 Baking brand Stork recently launched a DIY kit to make a wedding cake, pictured, after they revealed that couples often spend £523 on the cake alone for their big day 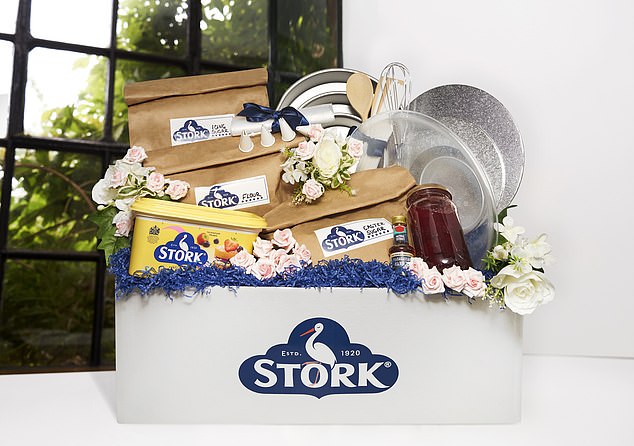 Included in the kit, pictured, is everything needed to complete th ebake including all the  ingredients and a selection of faux flowers to decorate

Rosie added: ‘If anyone’s going to France before the wedding, ask them to stock up on some cheap booze for you. My parents found us bottles of 1.40 euro sparkling wine that actually tasted great.

‘But just don’t get stressed out over small details! The little things all add up to loads of money and people mostly won’t even notice them. Just focus on the main things and on enjoying your day.’