A woman who is ‘sick’ of a friend repeatedly borrowing money without any intention of paying it back, has been urged to confront her pal about the situation.

Taking to Mumsnet, the unnamed woman expplained how a friend regularly borrows small amounts of less than £10 from her, which she never sees again.

Most recently, her friend borrowed £20 and returned it, but then asked if she could order her a £9.60 make-up bag from ASOS, only to say that she can’t pay the money back until after pay day.

The woman revealed she’s considering sending the bag back and pretending that it never arrived because she’s so fed up.

Responses to the post argued the woman should tell her friend the truth and confront her about her borrowing habit, while others said it was her fault for continuing to lend her money. 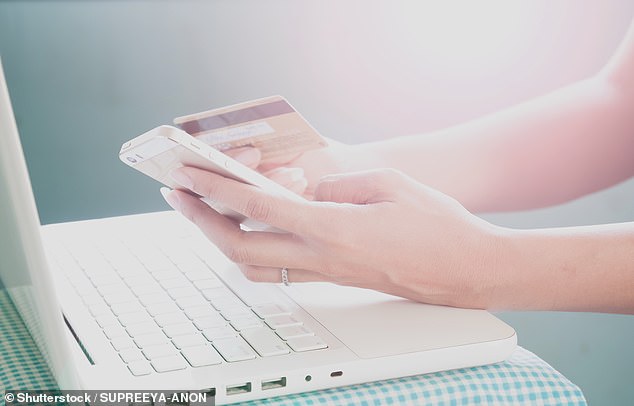 A woman who lives in the UK, has asked for advice on what to do when a friend repeatedly borrows money without any intentions of paying it back (file image)

Venting her frustration, the woman wrote: ‘Two weeks ago my friend asked to borrow £20 till she got paid (on Monday).

‘Sunday night she text saying ASOS had a make up bag she wanted and it’s £12 but they had 20% off so it was only £9.60 but the discount would end by the time she got paid the following day and would I order it and she would transfer it with the £20.

‘I said that’s fine and ordered it. Monday morning I woke up to a text: ‘Hi I’ve transferred the £20 I owe you, but I’ll sort the rest out the next time I see you as I get confused ha ha’

‘That’s what she says when she isn’t going to pay (she plays the confused card). Seen her on Tuesday and she said ‘Oh god I feel stupid saying this but I’ve just been to Asda and got too spendy and thought I was rich and now I’ve spent all my spare money am I ok to sort it out next month’

‘Obviously all I could say was yeah sure. She won’t,it will end up being a gift from me. It’s always the amounts under £10 she never pays. 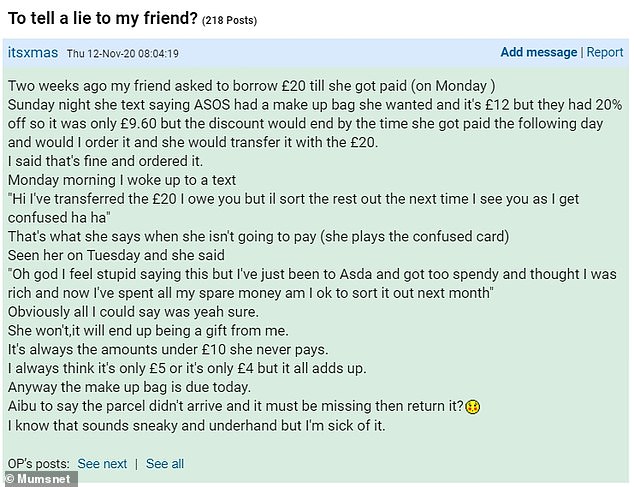 Posting on Mumsnet, the woman explained a friend recently paid back £20 but wants to delay giving her the money owed for a make-up bag

‘Aibu to say the parcel didn’t arrive and it must be missing then return it? I know that sounds sneaky and underhand but I’m sick of it.’

A flood of responses to the post argued the woman should be honest with her friend and refuse to lend her money in the future.

One person wrote: ‘Don’t sink to her level and tell lies. Be straight, tell her the bag has arrived and you’re going to return it because she hasn’t paid.

‘She is never to ask you for money again. Then stop being such a sucker.’

‘Insanity is doing the same thing over an over again and expecting different results. Make a stand today, otherwise she will never change. ‘I don’t have the spare money for this bag, can you pay me today, else I will need to return it’ is all you need to say. Just ignore if she starts making excuses or getting stroppy,’ another said.

Others advised the woman to give the make-up bag to her friend as a Christmas present, but warned she shouldn’t allow her friend to keep taking advantage of her.

One person wrote: ‘I’d give it to her as a Christmas present but tell her that up front. Slightly concerning that she seems to be living hand to mouth but suddenly decides she wants a new make-up bag. Is she struggling to just crap with money?’

‘You know she keeps doing this because you enable her… stop being a mug. She’s not your friend if she repeatedly takes advantage of you,’ another said.

A third added: I’d keep it until she pays. ‘You know what she’s like but you keep buying her things. The problem here is you.’

Other responses suggested the woman could give her friend the make-up bag as a Christmas present, but said she shouldn’t lend her any more money