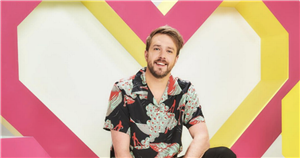 Love Island star Iain Stirling will be staying in the UK this year to voice the hit show – but why is this?

The star’s wife Laura Whitmore has jetted off to sunny Majorca to present the hit reality show, with hubby Iain staying behind.

Narrator of the show Iain never fails to make us chuckle on the show, so why is he staying put in the UK while it’s on?

Why is Iain Stirling staying in the UK during Love Island this year?

Iain, 33, is remaining in the UK amid travel restriction concerns.

The star, who became the voice-over for the hit show in 2015, joked he’s looking forward to being “locked away” over the summer, while he records for the show.

Iain announced his decision while appearing on Loose Women via a video link, during which he said: “We are in London, I think, now, this is the thing with coronavirus, I never want to say anything because you never know, who knows what's going to happen.

“I don't know what colour Majorca is going to be next week, it will be tartan by the time I'm done with it!”

He added: “I am very excited, I have not been in a sound booth for quite some time.

“This is like my gaming room but it's not quite the sound booth, I am looking forward to being locked away all summer.”

Joking about Iain’s role, Loose Women presenter Jane Moore said: “When we watch the show we think you do five minutes in the booth and then you're sunbathing all day, but I know it's not easy.”

To which Iain responded: “Me and my friend Mark, we write the show together, and we definitely get to the stage where say a couple have been together three of fours weeks, you run out of ways of introducing them.

Love Island series one contestants then and now: from babies and break-ups to reality show axings

“Or week five when there's another text, you think, "I have ran out of ways to say this now." So you can watch out for that when it's week six, week seven!”

While Iain stays in the UK, his wife Laura has landed in Majorca with their 12 week old daughter.

The new mum, 36, touched down in Majorca on Thursday following the announcement the Spanish island had been moved to the UK government’s travel green list.

The new series of the ITV2 dating show finally kicks off on Monday, June 28, and it can’t come quick enough after more than 18 months off our screens.

The TV presenter was spotted leaving the airport wearing a light wash denim jacket and a pair of large oversized sunglasses and a camel face mask.

Laura beamed as she walked through the Palma De Mallorca airport with her baby daughter strapped to her chest in a leopard print baby carrier.

Laura and husband Iain Stirling's baby daughter, whose name is yet to be revealed, didn’t appear to be fazed by her first flight as she sat in her baby carrier while her mum pushed their bags through security.

Laura had shared a selfie of herself as she boarded the flight from the UK, along with a snap of her and her daughter's Irish passports.

She also gave fans a glimpse of her Love Island-themed nails, painted in white with small red hearts adorning them.