Some people may have to wait until mid-December for their second shot of a COVID-19 vaccine due to local and international supply problems.

Top government health officials also said it was “impossible to predict” when the first 4 million people would receive their first dose, a milestone initially expected by the end of the month. 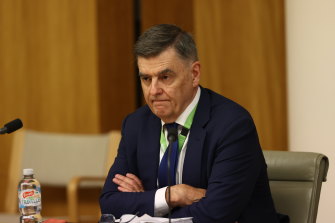 Vaccine supply had been “a significant issue” in the early stages of the vaccine program, Health Department secretary Professor Murphy said.Credit:Dominic Lorrimer

Health Department secretary Professor Brendan Murphy said all first doses would be delivered by October but the 12-week wait between AstraZeneca doses recommended by Australia’s expert vaccine taskforce meant some people might not receive their second dose until mid-December.

“There may be some at the end of October that might have only had one [dose],” he told a parliamentary COVID committee hearing on Thursday afternoon.

“The great majority of people have had two vaccines by then and everyone will have had one, and it’s a semantic difference where there are a small proportion who have to come back a little bit later for their second dose.”

The federal government has repeatedly said all adults who wanted it would be vaccinated by the end of October.

Health Department associate secretary Caroline Edwards said the rollout might not be completed until mid-December.

In January, they expected 4 million people to have received their first dose by the end of March. That milestone was later pushed to early April, but Labor senator Katy Gallagher questioned whether that was achievable.

“It would be impossible to predict exactly when we will hit 4 million until we know what the CSL [local] production capability will be like, what the further international supplies will be like,” Professor Murphy said.

Vaccine supply had been “a significant issue” in the early stages of the vaccine program, Professor Murphy said.

“We haven’t had access to the international doses that we thought we would, because we thought we would get 3.8 million AstraZeneca doses,” he said. “The Pfizer vaccine supply chain has also been limited but it’s predictable, but something over 100,000 doses a week have been coming in since we started our program.”

The government has had to keep half of all the 1.3 million doses already imported aside for second doses, but once CSL started delivering 1 million doses a week of the locally produced AstraZeneca vaccine the rollout will ramp up.

When the locally manufactured vaccines arrive, they will be distributed to 5000 GP clinics and vaccination sites around the country.

“We will scale up very rapidly to complete the first clinical milestone, which in my view is the completion of all of phase one,” Professor Murphy said. “That will mean that we have effectively protected the most vulnerable Australians.”

Phase 1, covering almost 7 million people, is expected to be finished by the middle of the year, he said.