Women’s legal centres have renewed their call for an extra $25 million a year in federal funding, saying they cannot keep up with the flood of mostly domestic violence victims seeking specialist help.

Women’s Legal Services Australia (WLSA) says ongoing cases have increased by 70 per cent in the past year. There has also been a 40 per cent increase in demand for drop-in services, and centres are having to turn away 14 per cent more women, leading thousands to miss out on the help they need. 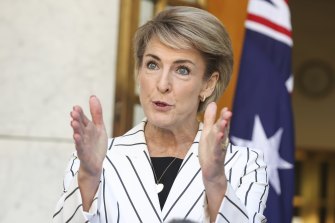 A spokesman for Attorney-General Michaelia Cash said funding proposals would be considered as part of the budget process.Credit:Alex Ellinghausen

“We’re supposed to be doing all this social and financial counselling and keeping women safe as well as legal services but we can’t do both adequately because we’re so under-resourced,” she said. “Continuing to pour money into Legal Aid and Aboriginal Legal Aid at the rates they do while continuing to not fund the women’s legal services will not address that problem.

“I’m not saying don’t fund them, it’s about equality of funding … to ensure women get access to justice.”

Last year, the federal government gave $20 million to frontline legal services dealing with domestic violence matters, as part of a $63.3 million boost to Legal Aid. However, WLSA says when the states and territories handed out this money, a disproportionate amount went to services that predominantly represented offenders.

Ms Taylor said the amount shared between the four women’s legal services in the Northern Territory wasn’t enough to fund one extra lawyer.

“All across Australia, the complexity of cases is increasing and we’ve got no funding to match that,” she said. “We need longevity of that funding and an acknowledgement that these issues are incredibly important.”

As part of its response to the landmark [email protected] report, the federal government has committed to providing more funding in May’s budget to community legal centres, Indigenous legal services and Legal Aid commissions to increase access to specialised legal advice for people who are sexually harassed at work. It has also agreed to consider extra funding for the 1800RESPECT hotline. A spokesman for Attorney-General Michaelia Cash said funding proposals would be considered as part of the budget process.

The nation’s women’s safety ministers have started work on the next national action plan to reduce violence against women and children, which is due to begin in 2022. A women’s safety summit on July 29 and 30 will bring together stakeholders to offer ideas for that work.