There is so much content dropping onto the streaming services all the time that every now and then an absolute gem slides through to the keeper virtually unnoticed. Such is Brand New Cherry Flavor, an utterly bonkers noirish thriller that is one of the best shows on Netflix right now.

The eight-part series stars Rosa Salazar as Lisa Nova, a young writer-director who gets a call out of the blue inviting her to Hollywood to meet hotshot producer Lou Burke (Eric Lange). He’s seen her graduating student short film and he’s blown away, and he wants her to turn it into a feature film. She can write, she can direct, and at their first meeting he slips her a $10,000 cheque to prove he’s serious. 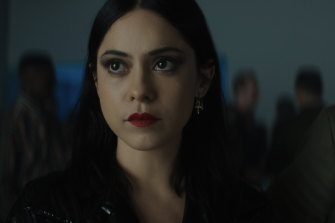 Rosa Salazar is electrifying as young writer-director Lisa Nova, a star on the rise.Credit:Netflix

It’s an exhilarating start, every young filmmaker’s dream come true, but you don’t need a crystal ball to see where it’s heading. Lou expects action from Lisa off set as well as on, and when she rebuffs his advances – gently, it must be said – he cuts her out of the picture, literally, by appointing another director.

So far, so Swimming With Sharks, with a dash of #MeToo. But this tale – adapted by Nick Antosca and Lenore Zion from a 1996 novel by Todd Grimson – isn’t just about dancing with the Hollywood devil. It’s a surreal, bloody, comical dive into sex, death and magic, the unconscious, the nether regions of the self and the city, all bathed in neon light and set to a pulsing early-’90s soundtrack.

It opens with headlights on yellow lines down the middle of the road, a nod to Lost Highway. That’s just the first of many moments when the influence of David Lynch can be felt.

A spectral being, filmed using bandages and old-school stop-motion techniques (simultaneously bringing to mind the Elephant Man and the baby in Eraserhead), and a trapdoor in Lisa’s bedroom, beneath which lurk the ghosts of her dreaming life, are especially indebted to the master of surreal horror.

But it’s the body horror of David Cronenberg that has inspired some of the most hilarious, gross-out moments. Having struck a deal with Boro (Catherine Keener), an 800-year-old body-hopping witch from South America, to place a curse on Lou, Lisa is made to vomit up kittens from her mouth by way of payment.

When she says “enough”, Boro seems to relent, only for Lisa to develop a stigmata-like wound in her side. She’s horrified, but as she fingers the wound she is aroused. Soon her actor boyfriend Roy Hardaway (Jeff Ward) has popped around for some exploratory probing. Inevitably, there’s another kitten.

There are zombies too, magic potions, poison toads that demand to be licked, hitmen and incipient jungle everywhere you look. It’s mad, edgy and deliriously fun. 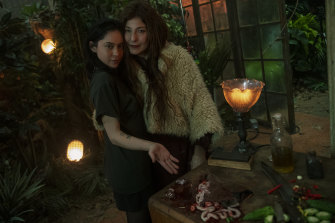 Salazar with Catherine Keener, who plays the 800-year-old witch Boro.Credit:Netflix

You could make sense of Brand New Cherry Flavor as an allegory for the voracious appetite of Hollywood for fresh blood, and the price exacted for a shot at the big time. Or you could opt to resist making sense of it, in the way the original surrealists advocated, and just give yourself over to the heady delights of bold, risky filmmaking, as well as Salazar’s exceptional star turn.

Either way, this deliciously sour fruit is one to savour.