After the restoration of civilian rule under President Raul Alfonsin in 1983 – a year after the conflict ended – the Reagan administration proposed lifting a ban on US arms sales to the South American nation. 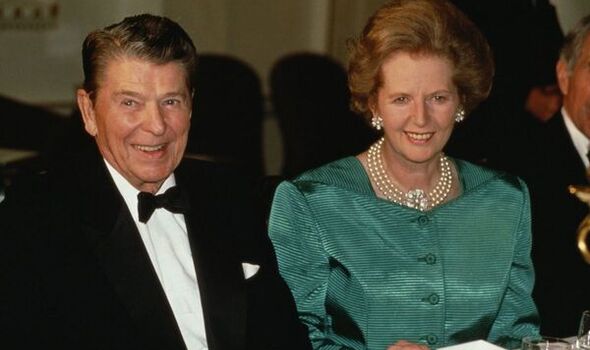 The embargo had been imposed in 1977 in response to human rights abuses after the military junta seized power a year earlier.

However, a US State Department memo has revealed that Baroness Thatcher, prime minister from 1979-1990, successfully pressured Washington to delay plans to resume arms sales to Buenos Aires.

Argentina’s defence minister Horacio Jaunarena made a visit to Washington DC in October 1987 in a bid to negotiate a deal to buy arms.

A memo dated December 15 that year says he “left a list of equipment needs”, including the American-built A-4 Skyhawk fighter-bomber aircraft.

The Argentine Air Force lost almost half of its fleet of 60 Skyhawk jets in the Falklands conflict.

But it had sunk four Royal Navy ships and damaged six others during the 1982 war, which was sparked by Argentina’s invasion of the British territory. It surrendered 10 weeks later.

The December 15 memo noted: “Since 1982, Her Majesty’s Government has been especially sensitive to the sale of aircraft to Argentina – especially replacements for Argentina’s deteriorating A4s.”

The year before, the Iron Lady blocked a proposed deal, which required Washington’s agreement, for Israel to sell Argentina 12 of its Skyhawks after she lobbied the then US President.

The memo said: “HMG’s objections have blocked transfers of A4 to Argentina from Israel and a proposal to co-produce A4s in Argentina.” Meanwhile, another plan for the US to upgrade Argentina’s remaining Skyhawks was abandoned following a diplomatic intervention by London.

Baroness Thatcher was concerned about a fresh threat to the Falklands following a mutiny by parts of the Argentine army in April 1987, sparking fears Buenos Aires might fall back into military dictatorship.

The US State Department believed Mrs Thatcher was wrong to be concerned about a return to military rule.

But the proposed sale of further Skyhawks to Argentina, which continues to claim sovereignty of the South Atlantic archipelago to this day, did not go ahead, largely due to pushback from the UK Government.

And it was only in 1994 that the US eventually agreed to upgrade the country’s Skyhawks.