Victorian stuck in isolation waiting for test results for a week have been told their samples are no longer suitable to be tested following a “tsunami” of demand at Melbourne laboratories.

Positive patients who registered their rapid antigen tests with the Department of Health were also mistakenly informed they were free to leave isolation late on Saturday as the new system was rolled out, in what Health Minister Martin Foley has acknowledged would likely involve inaccuracies in its first days. 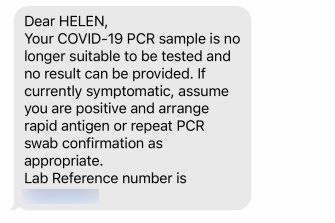 Melbourne Pathology sent text messages on Saturday that COVID-19 samples taken up to seven days ago were no longer able to be tested.Credit:Helen Tierney

Private clinic Melbourne Pathology, which closed its PCR testing sites to the public this week to deal with a backlog, on Saturday sent out text messages informing test patients their samples could not be processed.

“Your COVID-19 PCR sample is no longer suitable to be tested and no result can be provided,” the text messages said. “If currently symptomatic, assume you are positive and arrange rapid antigen or repeat PCR swab confirmation as appropriate.”

The Department of Health did not respond to questions by deadline.

Helen Tierney waited seven days, having been tested at the Melbourne Pathology clinic in North Melbourne last Saturday, only to be told she would need to be tested again. 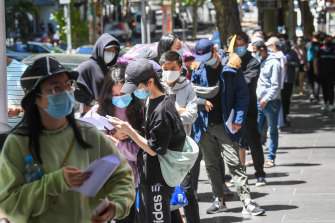 Melburnians queue for testing on Russell Street in the CBD in the lead up to Christmas.Credit:Justin McManus

She remained in isolation on Saturday after seeking out another test from community health provider cohealth in Collingwood, where she waited in line just 15 minutes, having struggled to find rapid antigen tests.

“I suspect I’m negative, or at least negative now.”

Separately, positive patients who listed their rapid antigen tests with the Department of Health for the first time on Friday — accounting for 26,428 extra infections announced on Saturday — were also falsely informed they could leave isolation from the date the positive tests were received, rather than seven days later.

Corrections were later sent out about 90 minutes later. “We apologise for any inconvenience this may have caused,” the messages said.

Wait times at testing sites have been up to six hours or more after an explosion of Omicron cases and the busy Christmas and New Year period, forcing the Victorian government to expand its reliance on rapid antigen tests which were also in short supply. People have been unable to access either a PCR or rapid test kit, which were now being distributed for free at 40 testing sites.

Strains in the system led to the botching of results in Sydney late last month, when hundreds of people were wrongly told they were negative to COVID-19 because of “human error”.

Melbourne Pathology was one of four private pathology labs which closed their testing centres from Tuesday, along with 4Cyte, ACL and Dorevitch, to process a backlog of tests. The providers run a total of 54 testing sites in Victoria, with 4Cyte accounting for 41.

Dr Ellen Maxwell, medical director at Melbourne Pathology, this week told ABC Melbourne radio there was an “absolute tsunami” of testing demand in the lead up to the festive period and staff had been working overtime.

“I think there’s no relief in the very short term, in the next few weeks, and I would just beg for some forgiveness from the community about the limitations of the system to be able to provide them with the level of testing that they’ve become used to,” said Dr Maxwell, who was positive with the virus this week.

“We’re all a bit distressed that we can’t maintain it at this point in time.”

Royal College of Pathologists of Australasia president Dr Lawrie Bott this week said it was an “extremely challenging time for laboratories”.

“We ask for the community’s patience and cooperation as the turnaround times of Australia’s laboratories’ increase. At present, laboratories are running beyond capacity and staff are working under significant pressure. To put this into context, 1.7 million PCR tests have been done in the past week, that’s 242,000 per day. That’s approximately 1 test in every 106 people in Australia, each day.”

Laboratories have had to change testing procedures due to the prevalence of COVID-19 in the community and staff were also being furloughed after being infected with the virus, Dr Bott said.

Melbourne Pathology was contacted for a response.