In a video seen by The Sydney Morning Herald and The Age, the man performs a sex act on another man in an office. The green carpet visible behind him in the video matches the carpet from the floor of the House of Representatives’ wing of Parliament.

The man in the video later claimed it was filmed in his boss’ office. 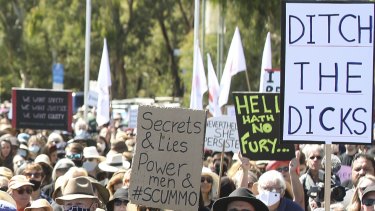 Signs in the crowd at the March 4 Justice at Parliament House in Canberra on March 15.Credit:Alex Ellinghausen

Ten News on Monday night reported a group of Coalition government staffers exchanged pictures and videos among themselves of sex acts performed in Parliament House.

This masthead contacted the man on Monday night but he did not respond. The Sydney Morning Herald and The Age have chosen not to name him because his employer has not confirmed his identity.

Ten News also reported that sex workers had been brought into Parliament House to visit MPs.

Prime Minister Scott Morrison said the reports and videos were “disgusting and sickening”. He urged anyone with further information to come forward, noting the man at the centre of the allegations had been identified and sacked.

“It’s not good enough, and is totally unacceptable. The people who come to work in this building are better than this,” Mr Morrison said in a statement on Monday night.

“The actions of these individuals show a staggering disrespect for the people who work in Parliament, and for the ideals the Parliament is supposed to represent.

“I will have more to say on this and the cultural issues we confront as a Parliament in coming days.”

Finance Minister Simon Birmingham, whose department is the technical employer of parliamentary staffers, said he was disgusted and appalled by the allegations, which showed “complete disregard” for what Australia’s parliamentary democracy stood for.

“It also demonstrates an enormous disrespect for a member or senator in relation to those staff, those offices. It equally shows a complete contempt, frankly, for the Australian taxpayers who paid the wages of such staff,” he told a Senate committee hearing.

“In my opinion, any individuals who engaged in such activity ought to prepare to pack their bags and leave the building for good. They should also think intently about apologising not just to their employing member or senator but to the Parliament and to the Australian public.”

A spokeswoman for Speaker Tony Smith and Senate President Scott Ryan said the presiding officers were not aware of the incidents or allegations until they aired on Monday evening.

“MPs and Senators employ their own staff. If the presiding officers are informed of the identities of the staff members, they are of course prepared to take action within the context of their responsibilities,” the spokeswoman said.

Liberal MP Dave Sharma said he was disgusted and horrified by the reports. He said he discussed the matter with his staff and was confident none were involved.

“The people responsible should self-identify and resign immediately,” he said. “To denigrate and disrespect Parliament in this way, and female MPs, is beyond reproach and condemnation.”

The Coalition government has been facing a series of allegations about sexual assault and harassment of women, with former Liberal staffer Brittany Higgins sparking the conversation when she went public about her alleged rape by a colleague in Parliament House. ACT Policing is now investigating the rape, which allegedly occurred after-hours in the office of Defence Minister Linda Reynolds just weeks before the 2019 federal election.

Attorney-General Christian Porter is also on mental health leave after vehemently denying claims he raped a 16-year-old girl when he was 17, at a debating competition in Sydney.

Tens of thousands of people marched in cities across the country on March 15 to express their anger about the treatment of women in politics and general society, and to demand change. More than 5000 people turned up to the March 4 Justice event outside Parliament House.

Prime Minister Scott Morrison has appointed sex discrimination commissioner Kate Jenkins to run an investigation into the workplace culture at Parliament House and responses to sexual harassment and assault.