The rapid growth of blueberry and other intensive farming in northern NSW has prompted authorities to crackdown on illegal water use and sparked concerns about pollution in rivers and the state's first marine conservation area.

The Natural Resources Access Regulator found 28 of 31 farms it inspected around the Coffs Harbour region in the first two stages of the clampdown were allegedly non-compliant with water laws. 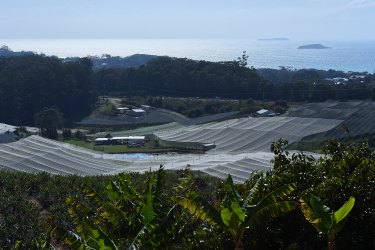 The Kororo Nature Reserve, near Coffs Harbour, has become “hemmed in” by intensive horticulture, particularly blueberries, cutting it off from other ecosystems. In the background is the part of the Solitary Islands Marine Park.Credit:Kate Geraghty

The regulator said in the five years prior to the start of the campaign, agencies received more than 130 reports of alleged breaches in the region. "This potentially indicated a high level of non-compliance," a spokeswoman for the regulator said.

For the first two phases, the regulator ordered 13 farms to reduce the capacity of dams among 25 directions. Other actions include 20 penalty notices, with more likely after a third stage of investigations last month.

The problems stem in part from the conversion of banana farms to blueberries, raspberries and cucumbers among other products in the past two decades. Farms with set water licences have been subdivided, with new owners apparently adding bores, pumps and even dams on the smaller plots. 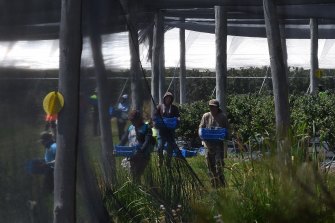 Workers, some carrying crates of blueberries on a blueberry farm near Sandy Beach, north of Coffs Harbour, NSW. Credit:Kate Geraghty

Water quality, too, has been compromised as the more intensive crops increase the use of fertilisers, pesticides and other chemicals. That's prompted the Coffs Harbour City Council to commission multiple studies by researchers from the Southern Cross University, among others.

One report found levels of nitrogen soared after rains as fertiliser from farms washed into rivers, reaching 695 times that of drier conditions.

"These [nitrogen oxide] loads were amongst the highest reported for catchments on the east coast of Australia, and similar to loads in rivers throughout China, Europe and India with strong agricultural or urban influences," the 2018 study found.

Shane White, one of the Southern Cross University researchers, said the Coffs region is prone to short, heavy rain bursts. Soils in the hilly area are typically shallow and sit on a clay base that limits the absorption of water, leading to significant run-off.

"Blueberries are a very immature industry [in Australia]," Mr White said. "We don't know all the problems nor all the solutions." 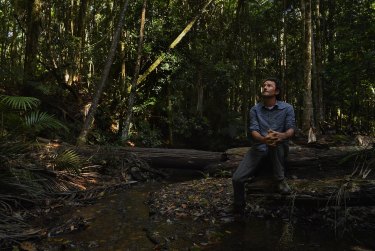 Mark Graham, an ecologist with Bellingen Nature Tours, said "rampant" growth of blueberries and other crops had brought a "massive mixture of really nasty chemicals". Along with extra sediment, the run-off posed a threat to the nearby Solitary Islands Marine Park, home to the world's second-most southerly coral reefs, he said.

"Corals don't like nutrients and the particularly toxic pesticides that come through the industry," said Mr Graham, who formerly served on the marine park's advisory committee.

Sally Townley, a Coffs Harbour City councillor, said land clearing can be added to the "litany of issues" generated by the industry, not least because farmers don't need to lodge a development application for so-called intensive plant agriculture under the local environmental rules. 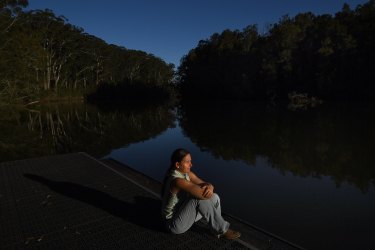 Sally Townley, a Coffs Harbour City councillor and ecologist, at the waters edge of the Bonville Creek in the Bongil Bongil National Park.Credit:Kate Geraghty

"Almost every other form of development requires consent," Dr Townley said. "So if you want to build a house, shed, pool, et cetera, you apply for consent via a DA."

Without such applications, projects aren't checked against standards, such as for environmental damage. Other curbs on clearing, such as the koala plan of management, are also not triggered.

"And there is no right of objection, even if it means a spray unit can now pass right next to your boundary fence, where your water tank, dog, or child may be located," Dr Townley said.

Peter McPherson, chair of Berries Australia, said 180 blueberry farms were among hundreds of horticulture farms in the Coffs Harbour region, and "the vast majority" were compliant. 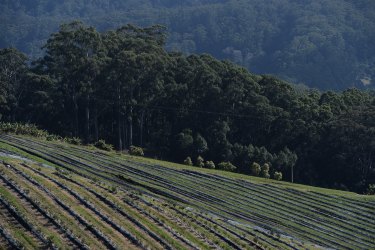 "The [regulator's] campaign is consistent with Berries Australia’s ongoing programs to improve farming practices in general and reduce the impacts of run-off from berry farms," he said, adding the industry generates $2 billion for the regional economy annually. 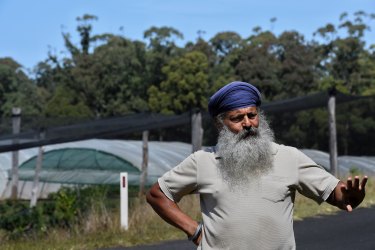 Farmers such as Iqbal Singh Grewal, who runs a four-hectare blueberry farm in the Sandy Beach area north of Coffs, says the industry is doing better in controlling run-off but its finances are turning sour. His farm switched to blueberries about five years ago after banana profits dwindled.

"It's going down now," Mr Grewal said. "Everybody's growing blueberries around Australia", with the industry stretching from the Atherton Tablelands in Queensland to Tasmania.