Rafael Hernández Colón, a three-term governor of Puerto Rico who argued for the preservation of the island’s commonwealth status while others were calling for either statehood or independence, died on Thursday at his home there. He was 82.

Mr. Hernández Colón had led the Popular Democratic Party, assuming the mantle from its founder, Luis Muñoz Marín, in the early 1970s. He was governor from 1973 to 1977 and, in two consecutive terms, from 1985 to 1993.

He made some bold decisions in his first term, seeking to increase the island’s autonomy in its complex relationship with the United States.

“Heir to his party’s populist tradition, he tried to make a mark by acquiring the Telephone Company, a state-owned shipping company (Las Navieras) and a series of warehouses,” Luis Martínez-Fernández, who lived in Puerto Rico at the time and is now a history professor at the University of Central Florida, said by email.

“None of those initiatives panned out,” he added, “largely because of poor timing, as the 1973-74 oil crisis coincided with his assumption of power, a crisis to which he responded by raising taxes, one of which was nicknamed ‘la vampirita’ — the little vampire.”

That led voters to turn Mr. Hernández Colón out. He returned to the governorship in the 1980s with a less confrontational stance toward the federal government, one closer to that of his party’s founder, who had negotiated details of the island’s original commonwealth status, which took effect in 1952.

“Rafael has learned well the lesson taught to us by Muñoz: that you have to deal with whoever is in the White House,” Jaime Santiago Meléndez, then director of the economics department at the University of Puerto Rico, told The New York Times after the 1984 election.

The eight-year tenure that began with Mr. Hernández Colón’s inauguration in January 1985 was relatively stable, with modest improvement in Puerto Rico’s chronically high unemployment rate. But the commonwealth-versus-statehood issue proved vexing for him.

In 1991, a referendum he supported, which included constitutional amendments and essentially called for the United States to respect Puerto Rico’s culture, was defeated after pro-statehood forces argued that it would lead to separation from the United States. Early the next year he announced that he would not seek another term.

Yet Mr. Hernández Colón continued to speak out even after leaving office. He expressed dismay that Puerto Ricans, in his view, tended to define all politics on the basis of a single issue. 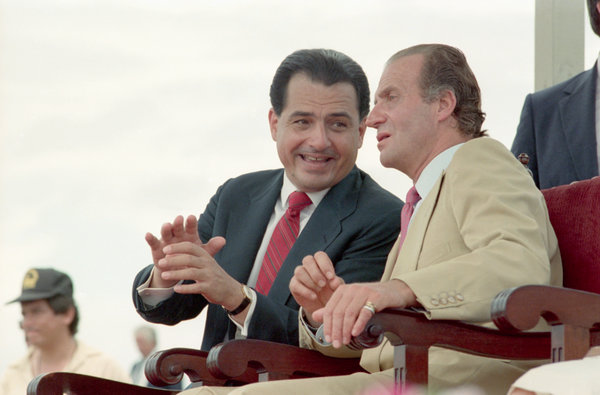 “The status debate has raged in Puerto Rico for half a century, dividing the people and breeding unending conflict — at worst bloody, at best bitter and destructive,” he wrote in Foreign Affairs magazine in 1998. “At least 75 percent of Puerto Rican voters align themselves with status options rather than candidates, programs or solutions to pressing problems.

“This orientation distorts governance,” he added. “It is as if choosing to break up the United States into 50 pieces or redefine the states to cut their numbers in half were the only issue in every presidential election.”

Mr. Hernández Colón was born on Oct. 24, 1936, in Ponce, P.R., to Rafael Hernández Matos and Dorinda Colón Clavell. His father, a lawyer, became an associate justice of the Puerto Rico Supreme Court.

Mr. Hernández Colón earned a bachelor’s degree from Johns Hopkins University in Baltimore in 1956 and a law degree from the University of Puerto Rico in San Juan in 1959. Upon graduating he married Lila Mayoral Wirshing and established a law practice in Ponce.

After holding several government posts, he was elected to the Senate in 1968 and became its president in 1969.

He was just 36 when he was first elected governor.

The governorship of Puerto Rico has historically flip-flopped between supporters of statehood and supporters of commonwealth status. (Advocates of independence, though often vocal, have been relatively few in number.)

Opponents of commonwealth status argue that it is a form of colonialism under which residents, among other things, cannot vote in presidential elections.

Mr. Hernández Colón, though, maintained that remaining as a commonwealth, especially if that status were strengthened in Puerto Rico’s favor, could afford the best of both worlds, providing the benefits of being part of the United States (including federal aid) but allowing for cultural independence.

Though his efforts to renegotiate commonwealth status stalled, he had some economic successes in his second stint as governor. One was a so-called twin-plant initiative, in which participating companies built one plant in a Caribbean country to do the unskilled work on a product and another in Puerto Rico to do the finish work.

Mr. Hernández Colón’s first wife died in 2003. He is survived by his wife, Nelsa López, and four children from his first marriage, Juan Eugenio, Jose Alfredo, Rafael and Dora.

Representative Nydia M. Velázquez, a New York Democrat who was born in Puerto Rico and served under Mr. Hernández Colón as director of the Department of Puerto Rican Community Affairs in the United States, called him “one of the giants” of modern Puerto Rican political history.

“Early on, Rafael recognized that Puerto Ricans everywhere, on the island or the mainland, are one family,” she said in a statement. “He worked relentlessly during his three terms as governor of Puerto Rico — and well beyond — to advance values of freedom and political inclusion for all Puerto Ricans.”