Queen Letizia looked elegant in a striking white and black dress, as she attended the act of commemoration for the 175th Anniversary of The Civil Guards today.

The Spanish royal, 46, wore a fitted knee-length dress paired with nude accessories for the engagement at the Royal Palace in Madrid this afternoon.

Her husband King Felipe VI, 51, was also at the formal event and was seen donning his medals as he stood and saluted members of the law enforcement agency. 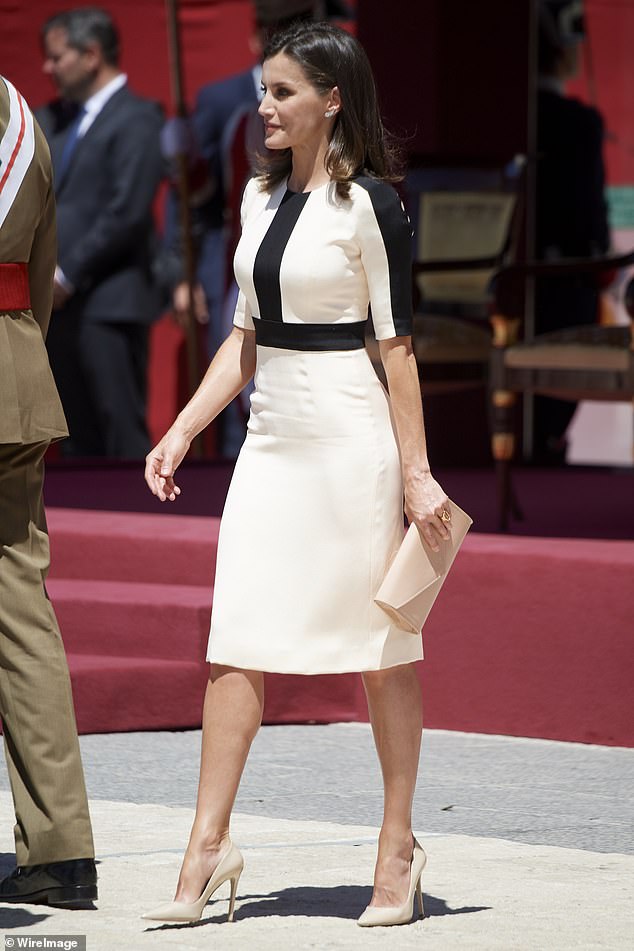 Queen Letizia, 46, wore a stylish dress with black detailing on the top to the commemoration for the 175th Anniversary of The Civil Guards today at the Royal Palace in Madrid, Spain 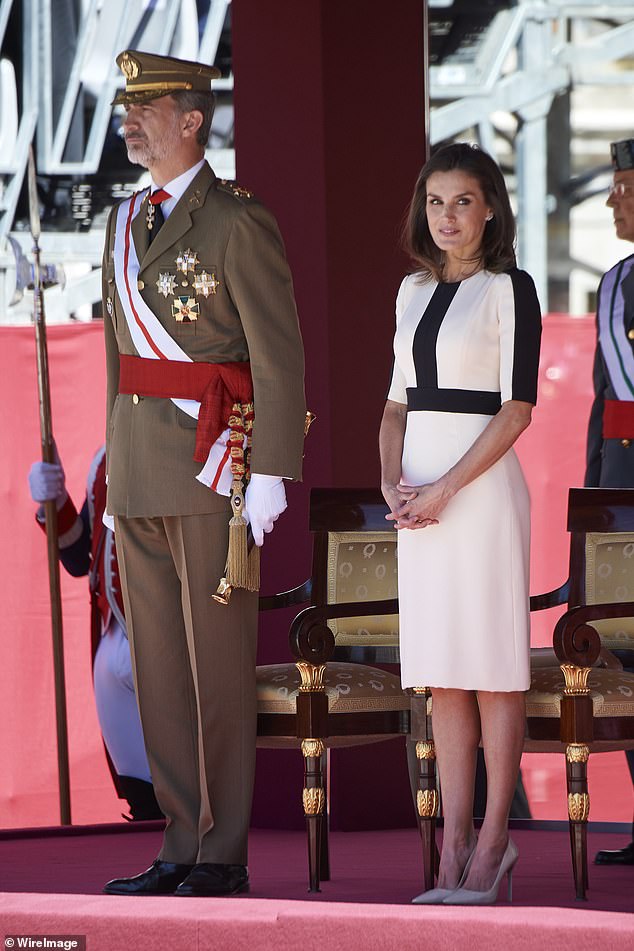 King Felipe VI, 51, was also at the event and proudly displayed his medals for the formal event

Queen Letizia wore her shoulder-length brown hair down and showed off a pair of silver feather shaped earrings which complimented her natural makeup.

Today is the 175th anniversary of the Civil Guard, the national police force of Spain, and it is organised along military lines.

It was created in 1844, and its first accomplishment was the suppression of brigandage in southern Spain.

The Civil Guard are responsible for rural areas and highways during their daily duties. They also patrol borders and are involved with marine search and rescue. 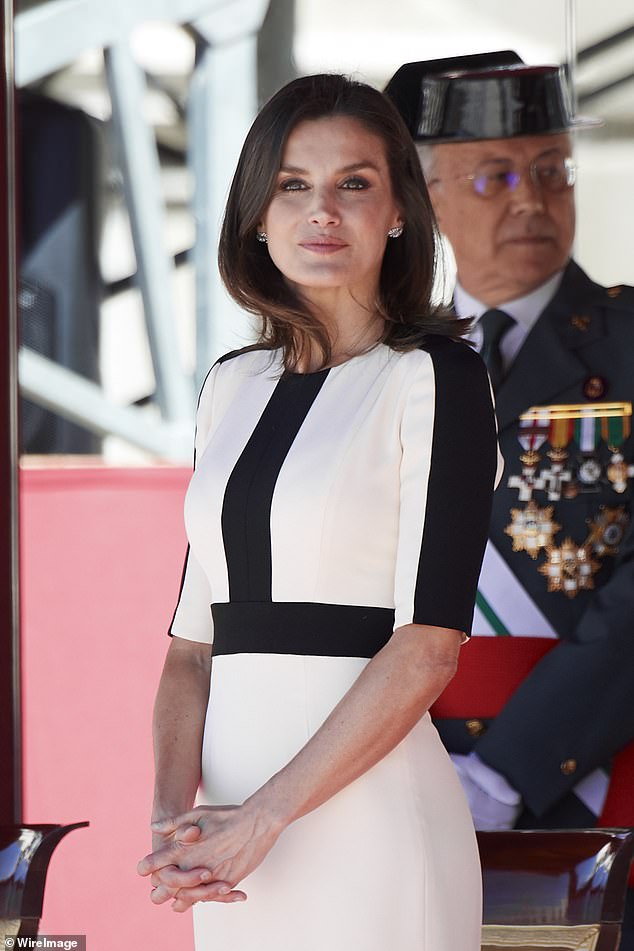 Queen Letizia, pictured, kept her jewellery to a minimum today but did wear a small pair of feather shaped earrings 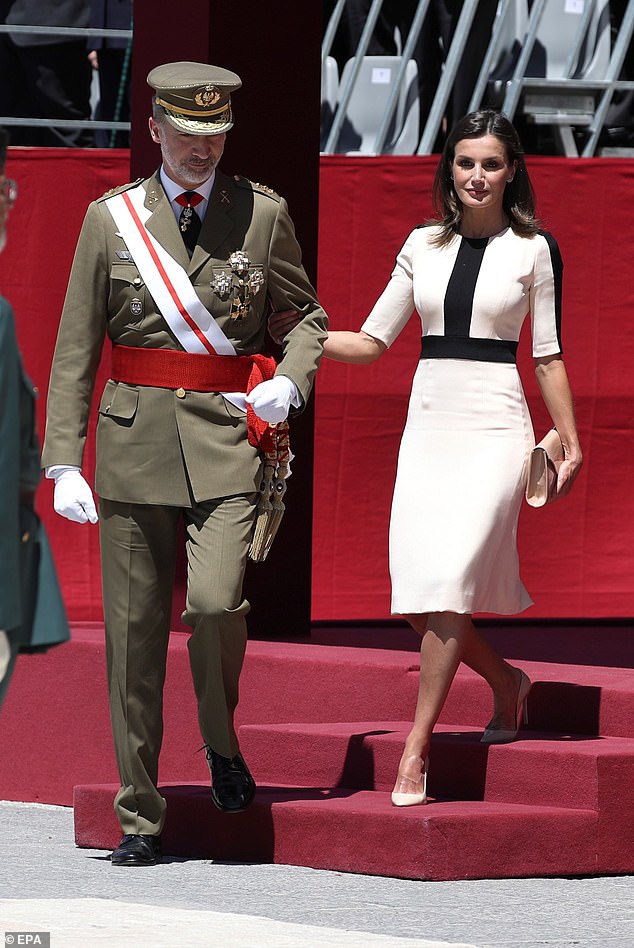 King Filipe leant his wife an arm as they walked down the steps at the ceremony. Stylish Queen Letizia carried a nude clutch bag which matched her shoes 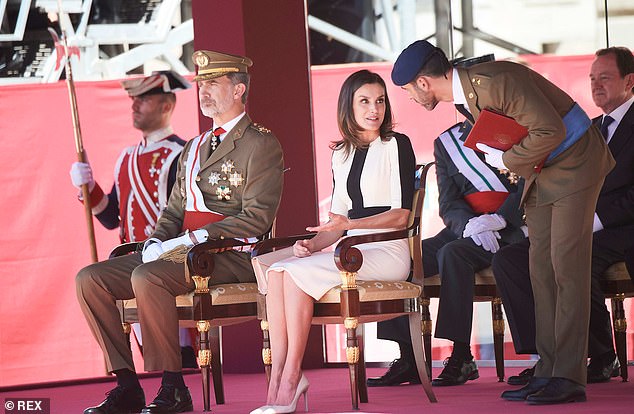 She appeared delighted to hand over the award for the Queen’s Cup competition to Real Sociedad players.

It was the first time in the cup’s history that the royal family has attended the match, with Queen Letizia clearly a fan of the beautiful game. 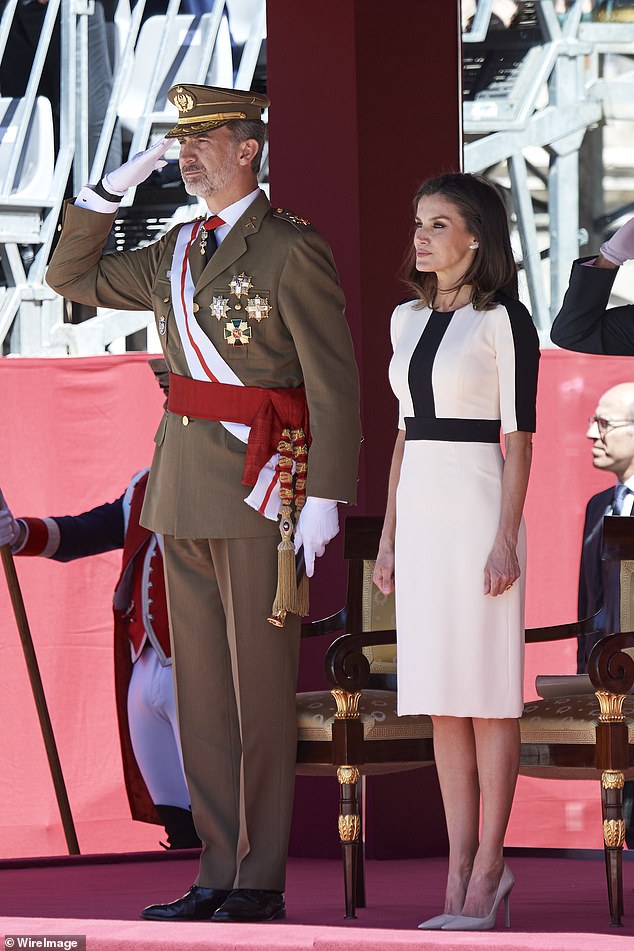 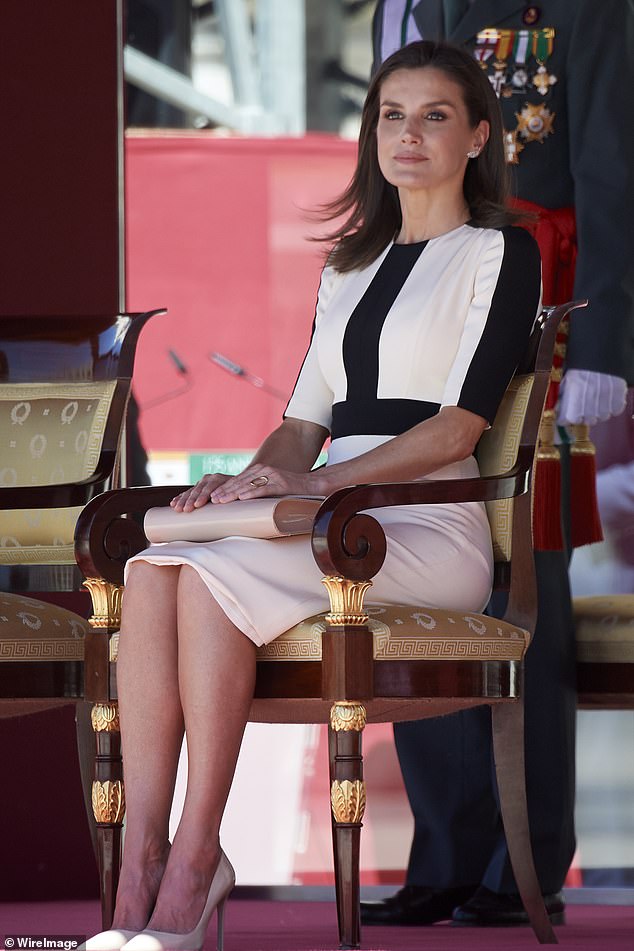 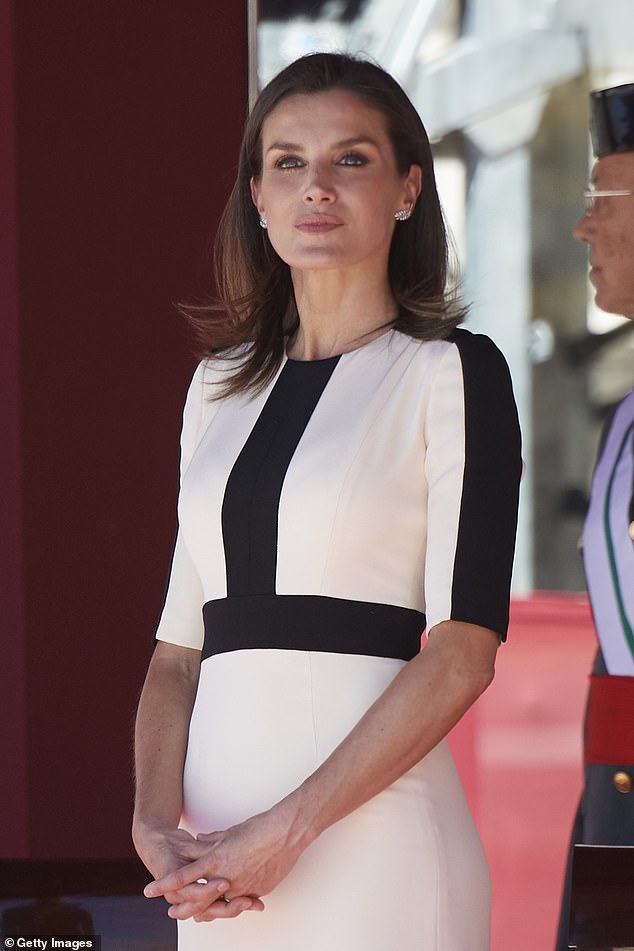 Queen Letizia opted for a neutral makeup look today and wore a nude lipstick, a small touch of blusher, a slight smokey eye and mascara

Queen Letizia is mother to Princesses Leonor, 13, and Sofia, 12, with husband King Felipe, 50, who ascended to the Spanish throne in 2014.

The relationship began in November 2002 and in 2003, just months after she had been promoted to the position of anchor on the national news channel, she quit her job and days later the royal engagement was announced. 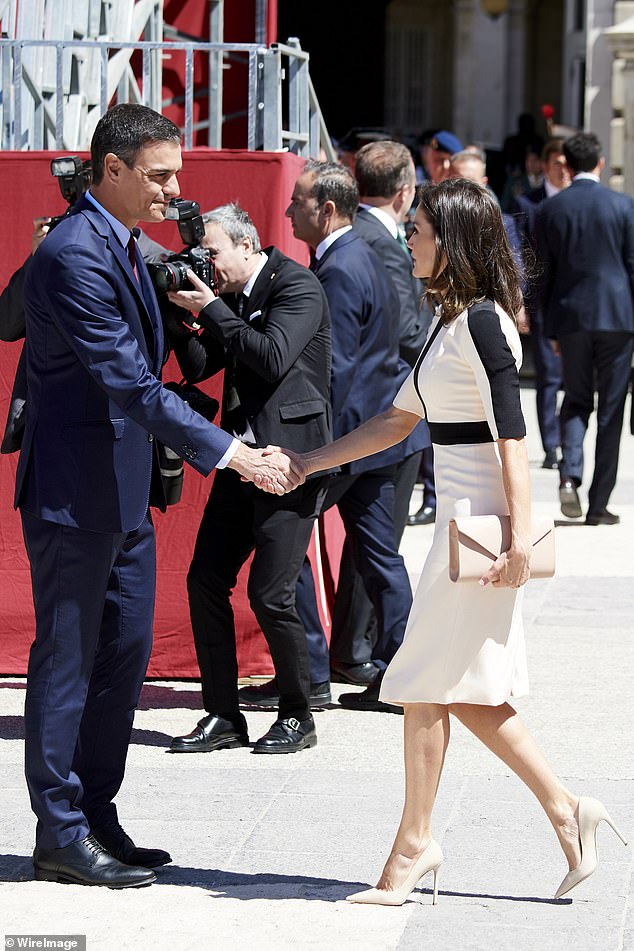 Queen Letizia of Spain, right, greeted president Pedro Sanchez, left, during the ceremony for the 175th Anniversary of The Civil Guards today 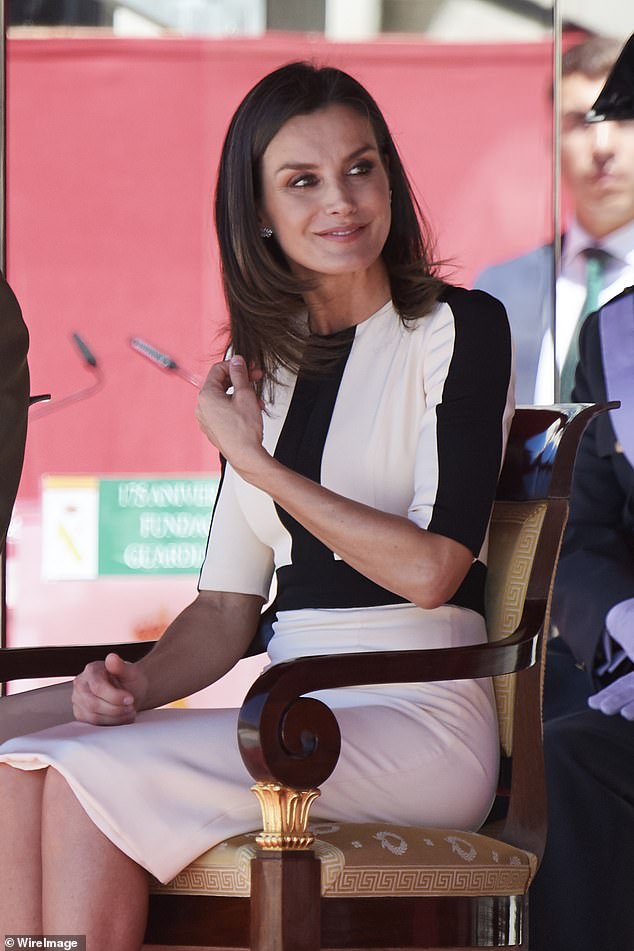