Survival of the smartest! A heart-tugging new series shows how the world’s deadliest predators are coping with wildfires, drought and melting sea ice

Luka and Kovu have an unbreakable bond. Despite not being related, the male cheetahs born 50 miles apart in Tanzania’s Serengeti National Park have been inseparable for seven years. Watching them lose their habitat, fight starvation and fend off other animals is a life-affirming tale that will warm the coldest heart this winter.

They’re just two of the stars of Predators, a compelling new wildlife series starting on Sky Nature this week complete with a purring voiceover from A-list actor Tom Hardy. As well as the cheetahs, the five-part series also follows polar bears in Canada, lions in Botswana, pumas in Chile and wild dogs in Zimbabwe as they try to survive in a world that’s rapidly changing.

The first episode focuses on Luka and Kovu, who are facing hardship due to climate change. Drought has delayed the migration of wildebeest and zebra to the Serengeti, leaving them starving. Then a wildfire destroys their territory and they’re forced to look for a new patch, bringing them into potentially deadly conflict with other cheetahs.

But it’s a bromance that endures through thick and thin, which is what attracted director Will Benson to these two cats. ‘Male cheetahs are such big personalities – they’re so unique, each one of them,’ he says. ‘Kovu was the brains of the operation, the hunter, while Luka is the strong one. He’s a bit brash and a bit silly, but boy does he have guts, and when you need him he’s there. 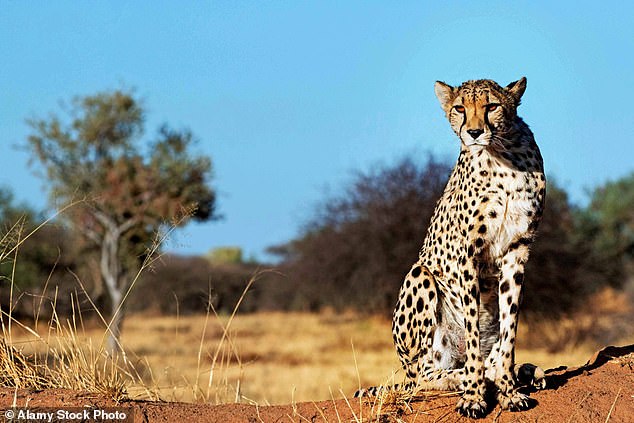 Watching them lose their habitat, fight starvation and fend off other animals is a life-affirming tale that will warm the coldest heart this winter

‘While we were there this wildfire happened and our researchers said Luka and Kovu would be looking for a new territory. So it became a no-brainer for us to follow this pair finding a new place to live.’

But the cheetahs didn’t always make it easy for the crew. ‘Cheetahs travel vast distances,’ explains Will. ‘The longest period we were without them was eight or nine days, which starts to get worrying when you see your production days ticking away. They have absolutely no idea that we are putting hundreds of thousands of pounds into telling their story. They’re on their merry way, thinking, “Where’s the food? Where’s the female?” Luckily we had Tanzanian guides who could follow the little bits of evidence and eventually track them down.’

Once located, the cheetahs were happy to be filmed. ‘Cheetahs are very curious, intelligent animals,’ says Will. ‘They’ll check you out and sniff your tyres, and lay in the shade under your vehicle. Every film team that spent time with them came back with brilliant stories about what happened with them that day.’

Despite the hardships caused by climate change, habitat loss and human activity, Predators highlights wildlife’s resilience in a world of jeopardy. In Zimbabwe’s Mana Pools National Park, cameras follow the fate of wild dogs, which are on the brink of extinction with only 700 breeding pairs left in the wild.

One cause is elephant poaching. Poachers take tusks but leave carcasses – essentially free food – which has resulted in a big leap in lion and hyena populations. That’s bad news for wild dogs, who don’t scavenge. Lions and hyenas see them as competition and kill them and their pups.

Predators follows Violet, an alpha female who shows great ingenuity by taking her latest litter away from their usual hunting ground to safety.

‘The way Violet is moving her pack around is unprecedented,’ says assistant producer Briony Jones. ‘She’s lost quite a lot of pups, but they’re keeping away from lions and hyenas. She’s doing a very good job.’

The danger of melting Arctic ice to polar bears is well documented. With less sea ice, they cannot hunt for food as easily and end up with less to eat. But Predators reveals how they’re adapting in Canada’s Hudson Bay.

‘In the last ten years or so, because the seas are a bit warmer, beluga whales are migrating up the coast for about three weeks and the polar bears have clocked that they’re a new food source,’ explains executive producer Wendy Darke.

You’ll see massive bears perched on a little rock. And at the right moment they pounce on the beluga whales,’ she adds. ‘We have an incredible sequence where one of the males pounces on a whale that’s almost as big as him. We’ve got great drone shots taken by wildlife photographer [and Strictly star] Hamza Yassin. He was our long-lens camera and drone operator in the Arctic. And he can dance!’

Predators is the first-ever co-production between Sky and Netflix, and it shows how even the world’s biggest predators are facing some of the same challenges as humans.

‘Whether you’re a cheetah in Africa or a polar bear in the Arctic, when the world around you changes so fast it’s like the carpet is being pulled from under your feet,’ Wendy says. ‘It’s going to create challenges.’

Thankfully, despite all the odds stacked against them, it seems these predators are up to them.