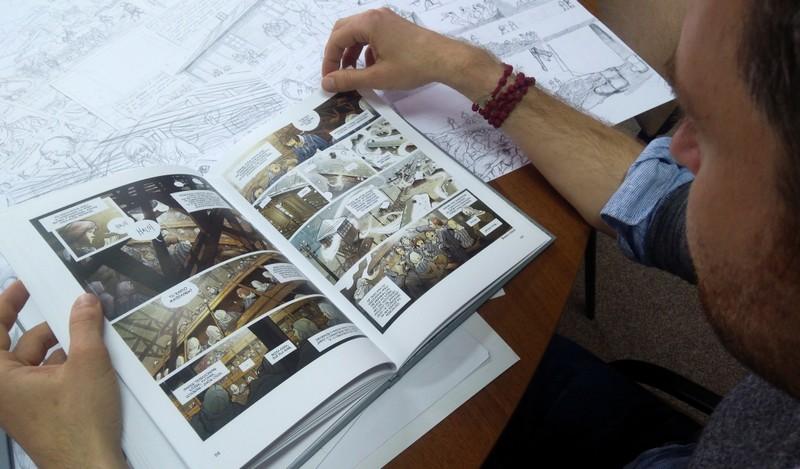 LUBLIN, Poland (Reuters) – A Polish artist has brought the horrors of the Holocaust to life in a graphic novel based on survivors’ testimonies, published to mark the 75th anniversary of a museum on the site of the concentration camp where they were interned.

“Chleb wolnosciowy”, or “The bread of Freedom”, combines the accounts of 11 prisoners at the Majdanek camp in eastern Poland, where 80,000 people, mainly Jews, are estimated to have died. In all, more than 3 million Polish Jews perished in the Holocaust.

“I wanted it to tell real stories, just like …how today we also often don’t want to see things that concern us. Similarly in those days, the world didn’t want to see what was happening in the camps,” the book’s creator Pawel Piechnik told Reuters.

The phrase “Chleb wolnosciowy” was used by camp prisoners to refer to bread baked outside, evoking their yearning for home.

“(The book) shows the bestial conditions in which the captives were held, but it also shows that even in the face of hunger, they were able to demonstrate empathy, cooperation (and) compassion,” said Agnieszka Kowalczyk-Nowak, press officer of the State Museum at Majdanek.

The museum was founded in November 1944, just months after the Nazis liquidated the camp, on the outskirts of Lublin, as Soviet forces neared.

Fifteen placards with pages from the book have been erected in Lublin’s city center, and the graphic novel format caught the eye of young passers-by.

“People need to be reached by means of images… Text might not be interesting to (the younger generation),” said 18-year-old high school graduate Paulina Szyszko.

“…Maybe it has the potential to stay in their memory and reach them deeper in its own way.”