Paul Brock, who was the founding executive director of the National Association of Black Journalists and had a long career in the news media, public relations and Democratic politics, died on March 14 at his home in Upper Marlboro, Md. He was 89.

His daughter Paula Shelley Rodgers said the cause was complications of diabetes.

Mr. Brock played a central role in 1975 in organizing the 44 founding members of the N.A.B.J., the premiere organization of Black journalists in the United States.

The group was formed in the years after the White House-appointed Kerner Commission concluded that poverty and institutional racism had led to the urban riots of the late 1960s and that for too long the news media had covered the country “with white men’s eyes and white perspective.”

The “journalistic profession,” the commission said, had been “shockingly backward in seeking out, hiring, training, and promoting Negroes.”

The report helped spur Black journalists to form their own professional organizations in several cities. But Mr. Brock, who had already helped found the Washington Association of Black Journalists, was among those who believed that a national organization was needed to promote more aggressive hiring practices across the industry and to improve how people of color were covered.

The idea for a national organization had been floated since 1967, but Mr. Brock, along with the television journalists Maureen Bunyan and Max Robinson, helped make it happen. When several Black journalists were planning to be in Washington in December 1975 to cover a conference of Black elected officials, Mr. Brock, Ms. Bunyan and Mr. Robinson suggested that they take that opportunity to organize. Mr. Brock reached out to more than 100 other Black journalists across the country and encouraged them to join.

“He was a great organizer,” Wayne Dawkins, author of “Black Journalists: The NABJ Story” (1993), said in a phone interview. “This was like building a car while it’s rolling down the highway, but he did it.”

The group had intense discussions over its bylaws and mission as well as who would be eligible to join. They decided that members had to be working journalists and could not be involved in public relations, academics or politics or be otherwise perceived as having agendas.

Mr. Brock, who had worked chiefly in radio, was by this time the deputy director for communications of the Democratic National Committee and was therefore disqualified from becoming a member of the group he had just helped found. But he had been so pivotal in its formation and committed to its mission, Mr. Dawkins said, that he was given the title of “founding executive director” and worked in that capacity without pay for several years.

Mr. Brock held many positions over the years, perhaps most prominently with the N.A.A.C.P., where he produced radio and TV programs and public service announcements, and with the Rev. Jesse Jackson’s 1984 presidential campaign. But he always said that his “heart and soul” belonged to the N.A.B.J.

Over 45 years, his family said, Mr. Brock attended every one of the group’s conventions, which have become major recruiting opportunities for news organizations. The association now has more than 4,000 members and is the largest organization of journalists of color in the United States.

Dorothy Tucker, president of N.A.B.J., said in a statement that Mr. Brock’s “long and fruitful career served as inspiration to many of us that hard work and commitment to community can open many doors.” 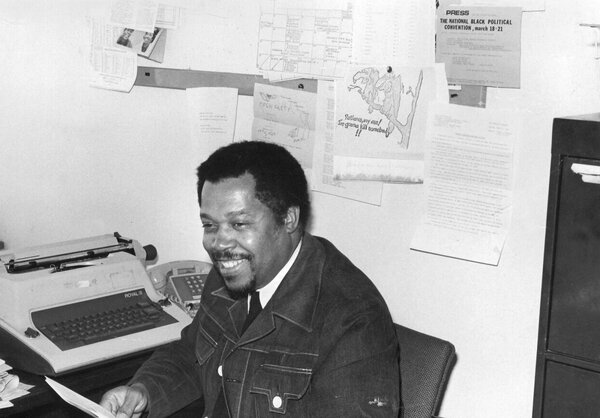 Paul Hillery Brock was born on Feb. 10, 1932, in Washington. His father, William Marshall Brock, was a businessman, and his mother, Virginia Estelle Gray, was initially a nurse and then ran a store. They were not married, and Ms. Gray raised Paul on her own until she married Edward Budd.

Mr. Brock attended Howard University but left to join the Air Force in 1951, partly as a way to escape segregation.

“My career all began because Harry Truman and the armed forces took a stand,” he told Pentagram, a military newspaper, in 2016, referring to the president’s 1948 executive order to desegregate the military.

Mr. Brock was a radio operator at the now-defunct air base in Watertown, N.Y., where he also edited the base newspaper. He returned to Washington in 1954 to help his mother after his stepfather had died and to take a job selling Smith-Corona typewriters to the federal government.

He married Joan Roberts and had four children with her; the couple separated in the early 1960s, and Mr. Brock went to the Virgin Islands, where he found work as a radio and television writer and producer.

Over time he was affiliated with numerous institutions, organizations and professions. In addition to producing programs and raising money for several radio and television stations, he conducted a weekly live remote broadcast from the progressive Potter’s House cafe in Washington for WETA.

He was also a senior fellow for public affairs at the Institute for the Study of Educational Policy at Howard University. While there, he wrote a still widely used primer on the Allan Bakke affirmative action case, in which the Supreme Court ordered a medical school to admit Mr. Bakke, a white student who said he that he had been a victim of reverse discrimination when he was originally denied admission. (At the same time, the court upheld the use of race as a factor in admissions policies.)

Mr. Brock married Virgenia Embrey in 2000. In addition to his daughter Ms. Rodgers, he is survived by his wife; another daughter, Lisa Brock; two sons, Michael and Christopher; four grandchildren; and 10 great-grandchildren.