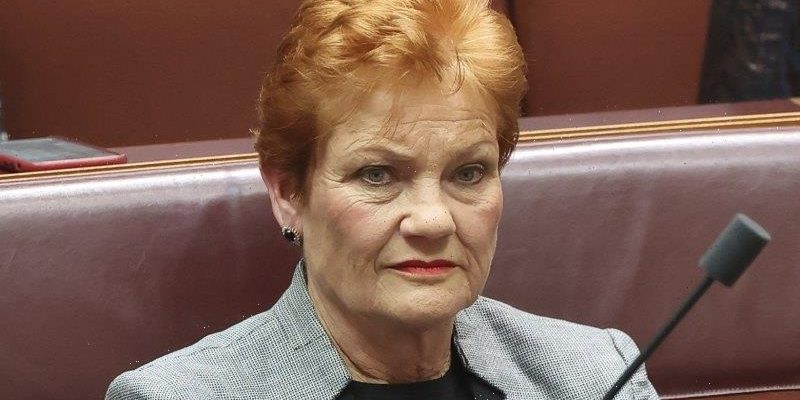 One Nation is aiming to sink a government-backed Senate inquiry into the ABC and SBS complaints processes by denying the Coalition crucial votes needed to defeat a Labor-Greens push to suspend it.

One Nation leader Pauline Hanson said she and senator Malcolm Roberts would abstain from a vote on a motion in the Upper House on Tuesday that, if successful, would force the suspension of the inquiry until the next term of Parliament. 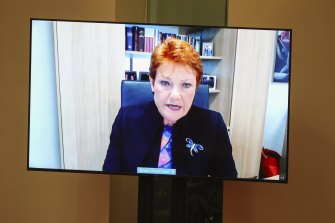 Senator Pauline Hanson, who is attending Parliament via video link, says the party will abstain from a vote to derail a government-backed inquiry into the ABC and SBS’s complaints processes. Credit:Alex Ellinghausen

One Nation’s absence from the vote will help deliver ABC chair Ita Buttrose’s plea for the Senate to abandon the inquiry.

Ms Buttrose has blasted the inquiry and its instigator, Liberal senator Andrew Bragg, chairman of the Senate standing committee on environment and communications, saying it was an act of political interference by the government and designed to undermine a separate independent review commissioned by the ABC board.

Senator Hanson, a trenchant critic of the ABC, said she would not be requesting a pair on the vote, a move that should push the numbers in favour of the motion.

“I had a discussion with Malcolm Roberts about it. We will be abstaining from voting,” Senator Hanson said.

With independent crossbench senators Rex Patrick, Stirling Griff and Jacqui Lambie signalling they will back the motion, Labor and the Greens should have the majority needed to defeat the government and suspend the inquiry.

Senator Hanson said she was frustrated by the government’s failure to “rein in” the ABC, which she claimed was biased, and believed the inquiry was unnecessary.

“All it’s going to do is create another inquiry. The government has known for a long, long time about the problems with the ABC. I’m sick of things going to more and more inquiries,” Senator Hanson said. “The buck stops with the Prime Minister.”

Both Senator Hanson and Senator Roberts, who are both unvaccinated against COVID-19, are attending Parliament via video link to avoid having to undergo hotel quarantine on their return to Queensland, as per the state government’s rules. This means they cannot vote directly on legislation or motions but can request a pair for the vote.

The motion directs the environment and communications legislation committee “to suspend the inquiry into ABC and SBS complaints handling until the independent review of the ABC’s complaints system”, and cites the request made to the Senate by Ms Buttrose.

The push to abolish the inquiry has been led by Greens senator Sarah Hanson-Young, the deputy chair of the committee, who has called it a “witch hunt”.

Senator Griff and Senator Patrick told this masthead they would support the motion. A spokesman for Senator Lambie said she was “minded to support the motion on the basis that politicians should not be determining the internal processes of the ABC” but she would keep an open mind to amendments.

Speaking on 2GB radio on Tuesday, Senator Bragg said the inquiry had already received more than a dozen submissions and it would be “unbelievable” if the process was derailed.

“Many serious issues have been raised in these submissions. Some of them are so serious we can’t actually put them up on the website straight away,” Senator Bragg said. “This is a community process where people can have their say about complaints handling so if the Senate votes to close this down, they’ll be voting to close down these people’s voices.”

The finding from the ABC’s inquiry – to be led by former Commonwealth ombudsman John McMillan and former SBS, Seven and Ten news boss Jim Carroll – are expected in April, while the Senate inquiry was scheduled to report by February.

With a federal election due before May, a suspension of the Senate inquiry until after the ABC review would mean Senator Bragg would be unable to revive it until the next Parliament.

Ms Buttrose commissioned the ABC review after a series of complaints, including from federal and state politicians, about how the broadcaster’s internal division reviews complaints about programs such as the Ghost Train series into the 1979 Luna Park tragedy.