Tennis star Novak Djokovic will leave the Olympics without any medals for the third time in a row after he lost
two consecutive matches and withdrew from an upcoming match due to a shoulder injury.

Djokovic, the top ranked men’s tennis player in the world, lost on Friday to Germany’s Alexander Zverev with a final score of 1-6, 6-3, 6-1 in the tournament semifinals. Zverev now will move on to compete for gold against Karen Khachanov from Russia on Sunday.

Djokovic’s upset defeat knocked himself out of the running to achieve a “Golden Slam” — the rare feat in tennis where a player wins each Grand Slam tournament and an Olympic gold medal during the same year. No man has achieved a Golden Slam since Steffi Graf in 1988, according to CBS Sports.

On Saturday, Djokovic lost his chance at winning bronze in men’s singles after his 6-4, 6-7 (6), 6-3 defeat to Pablo Carreno Busta from Spain.

And later in the day, he withdrew from his scheduled mixed doubles match with playing partner Nina Stojanovic due to a shoulder injury, trading in his final chance at winning a medal in Tokyo, the International Federation of Tennis reported.

“I’m sorry to Nina for not being able to play but my body just gave up,” Djokovic said. “I’m sorry that I disappointed a lot of sports fans in my country, but that’s sport. I gave it all, whatever I had left in the tank, which was not so much. I left it out on the court.”

Ash Barty and Josh Peers from Australia will instead receive the bronze medal for mixed doubles, according to the organizing committee for the Tokyo 2020 Olympic and Paralympic Games.

During his match against Busta, Djokovic threw his racket into the empty stands in frustration before later smashing
another racket into the net, which drew a warning from the umpire. 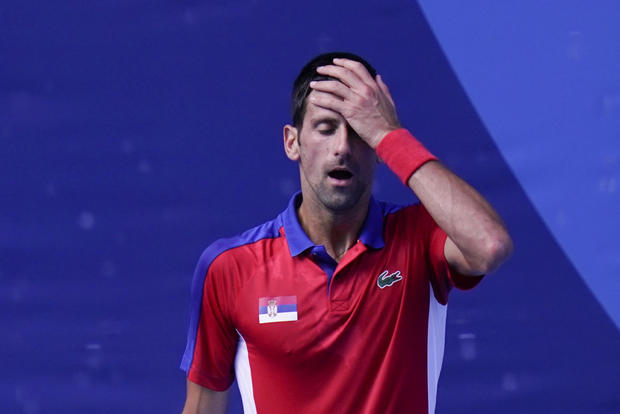 “It’s part of, I guess, who I am,” Djokovic said in a post-game interview. “I don’t like doing these things. I’m sorry for sending this kind of message, but we’re all human beings, and sometimes it’s difficult to control your emotions.”

Last year, the 20-time Grand Slam victor was disqualified and fined from the U.S. Open after he hit a ball out of frustration, striking a judge in the throat. The U.S. Open said in a statement at the time that his actions violated a rule of “intentionally hitting a ball dangerously or recklessly within the court, or hitting a ball with negligent disregard of the consequences.”

Djokovic said he hopes to compete in the Paris Olympics scheduled for 2024. “I will fight for my country to win medals,” he added.

Never give up, a true champion’s mentality ❤️@DjokerNole already has his sights on @Paris2024 🇫🇷#Tokyo2020 | #Tennis | #Olympics pic.twitter.com/Lp4peX0EQ6