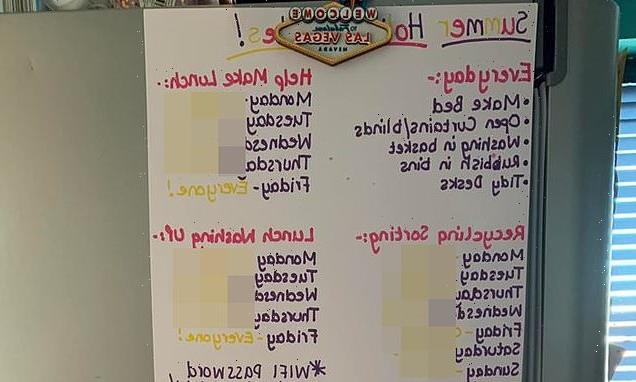 A mum-of-four has been branded ‘too strict’ after sharing a list of chores for her children to do over the school holidays – including making lunch daily, vacuuming and doing the washing up.

Gemma, from Wales shared a list of chores to a Facebook group  which instructed her four kids they won’t get the daily WiFi password unless they completed their chores and arguing with their parents about it meant ‘no pool time’.

The children, who are aged between eight and 12, each have to make their bed, open their curtains, tidy their desks and but their washing and rubbish away every day. 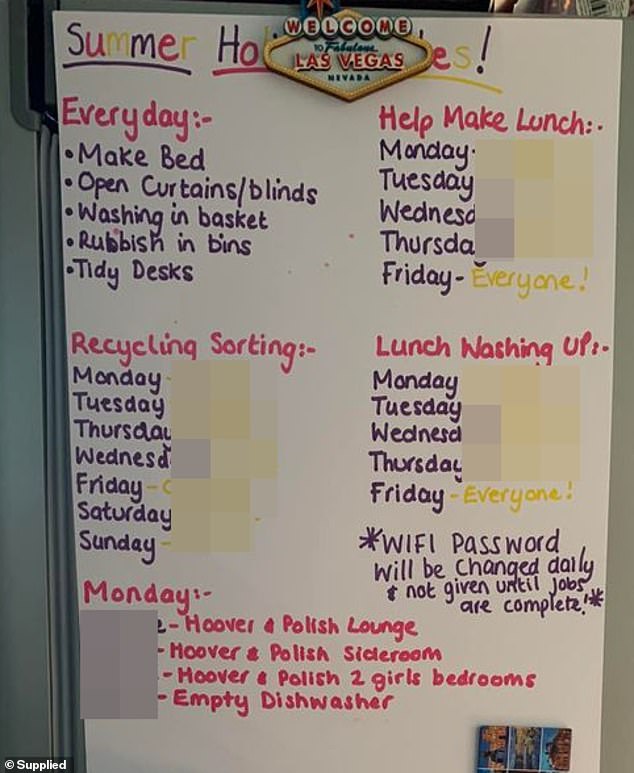 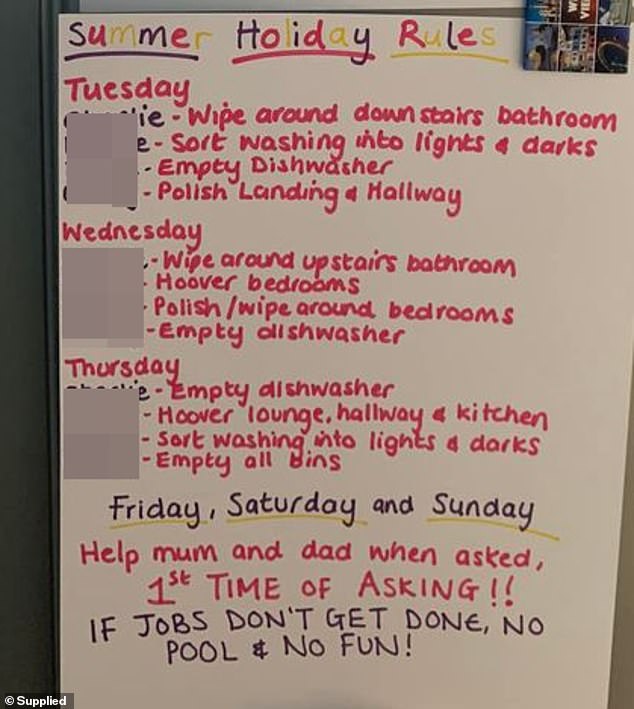 A mum-of-four has been branded ‘too strict’ after sharing a list of chores for her children to do over the school holidays – including making lunch daily, vacuuming and doing the washing up

Each of them also have rotating daily tasks, which includes making lunch, putting out the recycling, and doing the washing up.

From Monday to Thursday, they each have added chores, including vacuuming, polishing and laundry.

Gemma also revealed she’s coming to the end of her first year of a degree to be a midwife and looking forward to four weeks off with her children.

‘Decided I’ve worked too hard to spend my four weeks off picking up after my kids everyday so we have agreed on some ‘Summer Holiday Rules’ today,’ she explained.

She also explained that her children will be allowed to use the pool and WiFi once their ’10 minute’ morning chores are done.

While many praised the list, saying she was teaching the children responsibility, others urged her to relax the rules and ‘let kids be kids’.

While many praised the list, saying she was teaching the children responsibility, others urged her to relax the rules and ‘let kids be kids’.

‘You’ve given me a GREAT idea! All my boys too help but they don’t have set chores. They have things that they need to do before they’re allowed on their games (usually things like, make sure their uniform is ready for the next day and they’ve tidied their rooms)’ said one.

‘I love the “wifi will be changed daily”’ added another.

‘I agree that children should clean up after themselves like their room, laundry in the basket and help with washing, dishwasher etc but some jobs are for the parents, my kids feed their animals, make their bed, tidy room, help with dishwasher and washing but that’s all, this is too much and especially when there on holiday’ complained one.

‘I’d really advise you make the most of the summer holidays with the family while you get them. One of the hardest parts when you qualify is the work life balance, and something I say a lot is that I miss my children,’ said another.

‘I’m all for kids helping a little around the house, it’s their home too, but to say you’ve worked too hard to spend summer cleaning, I’m sure the children have too? And “no jobs no fun!’” Maybe it needs softening up a little. Kids aren’t kids for long.’ wrote another.