United States President Joe Biden and Australian Prime Minister Scott Morrison have reaffirmed plans for an in-person meeting of the “Quad” alliance within the next three months in their first phone call since the hurried withdrawal from Afghanistan.

Plans to hold the meeting – which involves Australia, the US, Japan and India – in late September were thrown into doubt by the upcoming Japanese election. 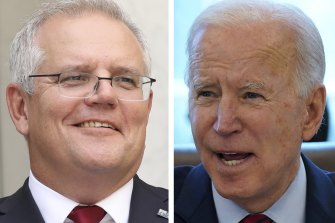 Scott Morrison and Joe Biden have had their first phone conversation since the Afghanistan withdrawal.Credit:Dominic Lorrimer, AP

In his conversation with the Australian Prime Minister on Friday morning Australian time, Mr Biden affirmed plans to hold the meeting “later this [Autumn]” in Washington, meaning the meeting will now likely take place in October or November.

It is unclear whether Mr Morrison will be granted his first one-on-one meeting with Mr Biden when he travels to the US. Mr Morrison met Mr Biden for the first time on the sidelines of the G7 summit in June, but the encounter was not one-on-one as originally planned with British Prime Minister Boris Johnson joining in.

The Australian Prime Minister said he had a “warm conversation” with the US President and was “looking forward to travelling to Washington when the Quad meeting will take place.

“We have some working dates around it but still some confirmations around that need to occur,” he said.

The re-emergence of the Quad in recent years had angered Beijing, which has labelled the group an “Asian NATO” designed to contain China.

The four leaders of the Quad countries held their first virtual meeting in March where they pledged to distribute one billion COVID-19 vaccine doses to developing countries in the Indo-Pacific.

Mr Morrison said support for the equitable access to COVID-19 vaccines and economic development initiatives in countries in the Mekong River region downstream from China would be on the Quad agenda when the leaders meet.

The two leaders also discussed the evacuation of thousands of people from Kabul in recent weeks, which saw Australia alone airlift more than 4100 Australian citizens, Afghan nationals and foreign officials.

Mr Morrison also told Biden he was sorry for the 13 American soldiers who were killed in a terror attack on the airport by Islamic State’s local affiliate. The Prime Minister said he and the US President also discussed the “next stage” of the Afghanistan exit, which involved creating a safe pathway for the hundreds of thousands of Afghan refugees out of the country.