Two people and a dog were killed Tuesday after a massive explosion caused by a large cache of fireworks rattled nearby homes in Ontario, prompting an evacuation order, CBS Los Angeles reported. According to the Ontario Fire Department, multiple units were are on the scene of a reported explosion in the area of San Antonio and Maple Avenue around 12:30 p.m.

Ontario Fire Department Chief Gayk confirmed Tuesday afternoon that two people were killed in the explosion and three others suffered minor injuries but did not need to be hospitalized.

Gayk also said a horse and a dog were injured but doing well. Another dog was found deceased at the property.

“Considering that there may be unexploded fireworks on the ground, the Ontario Police department and Ontario Fire Department are requesting that residents in the immediate area evacuate/shelter in place while personnel attempt to collect potentially hazardous materials off the ground,” the city said.

Gayk was on the scene and confirmed that a cache of professional-grade fireworks exploded. It wasn’t immediately clear what caused them to explode.

It was reported that multiple peripheral buildings were involved in the blast. The fire department did not confirm what the nature of the incident was but they were checking the area for further explosives.

One CBS LA employee who lives nearby reported that his entire house shook and that there was smoke in the air from it.

A Twitter user posted a video of the explosion saying, “Someone’s firework stack went off in Ontario shook our whole neighborhood.”

Road closures were temporarily issued by the Ontario Police Department. Francis, Locust, and Maple were closed between Fern and San Antonio, the department said.

Stunned residents captured the frightening scene Tuesday afternoon, as fireworks exploded into a ball of black and then white smoke.

Ontario explosion right near our home!!! We are literally down the street!! pic.twitter.com/gPgCBPeBWm

“My leg caught fire,” Arlene Fiero, a neighbor of the home, said. “Part of my house fell on me, part of the door and part of the wall, it just collapsed from the explosion.”

Fiero was filming with her cell phone after the first blast to make sure her family members were OK. That’s when the second, larger, explosion happened.

“It just shook everything,” said Samantha Soliz. “It shook the house, it shook me that’s for sure. We were just so scared. We were going to leave.”

Neighbors said fireworks are set off at all hours of the day and night which triggers car alarms.

The FBI and bomb squad joined first responders as the area remained evacuated.

“It sounded like explosions or anything and then it just shook our whole house,” said witness Ally Conant. “It was like an earthquake, I thought. And then she came running in the restroom and we were just like ‘What’s going on?’ and just freaking out. Total anxiety.”

The force of the explosion shattered dozens of windows at nearby homes and apartments.

“I cleaned up everything on the inside already but…it was worse than this,” said Ontario resident Allyssa Boroluzzi while showing the broken glass on the ground outside of her apartment.

Boroluzzi was inside her unit with her three young children at the time of the blast.

She and other neighbors said they have complained to police about constant explosions in the neighborhood that sounds like bombs going off.

“We were sitting inside and all we heard was, at first an explosion that was not so big, but it felt like an earthquake because everything shook,” she said. “It was quiet for about a minute or two but then that’s when the big explosion happened and then all the windows shattered.”

Detectives were questioning a group of people who walked out of the secure area, including men, women and children.

The ATF and the bomb squad remained at the property Tuesday evening, searching for any unexploded materials, as fire crews maintained a defensive position at the edge of the perimeter and a fire continued to burn at a nearby home. 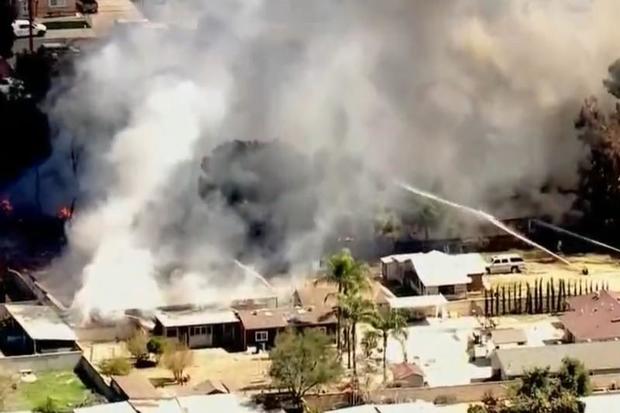