This student was stunned when a man who happens to share his name asked if he would pretend to be him at work – because he ‘couldn’t be bothered’ to do his shift.

‘The real Anthony’ opted to play along, offering to borrow the man’s overalls and take his role as a ‘duvet mover’. He also asked Anthony 2.0 if he would do the same for him.

But 29-year-old Anthony said: ‘I probably wouldn’t bro. I’m really selfish but I found the training would you mind just proving you can do this, because I’m a bit worried you won’t be able to and I’ll get fired.’

The 22-year-old was then sent a hilarious training video to test his suitability for the role before sharing their exchange on Twitter and leaving his new pal disappointed. 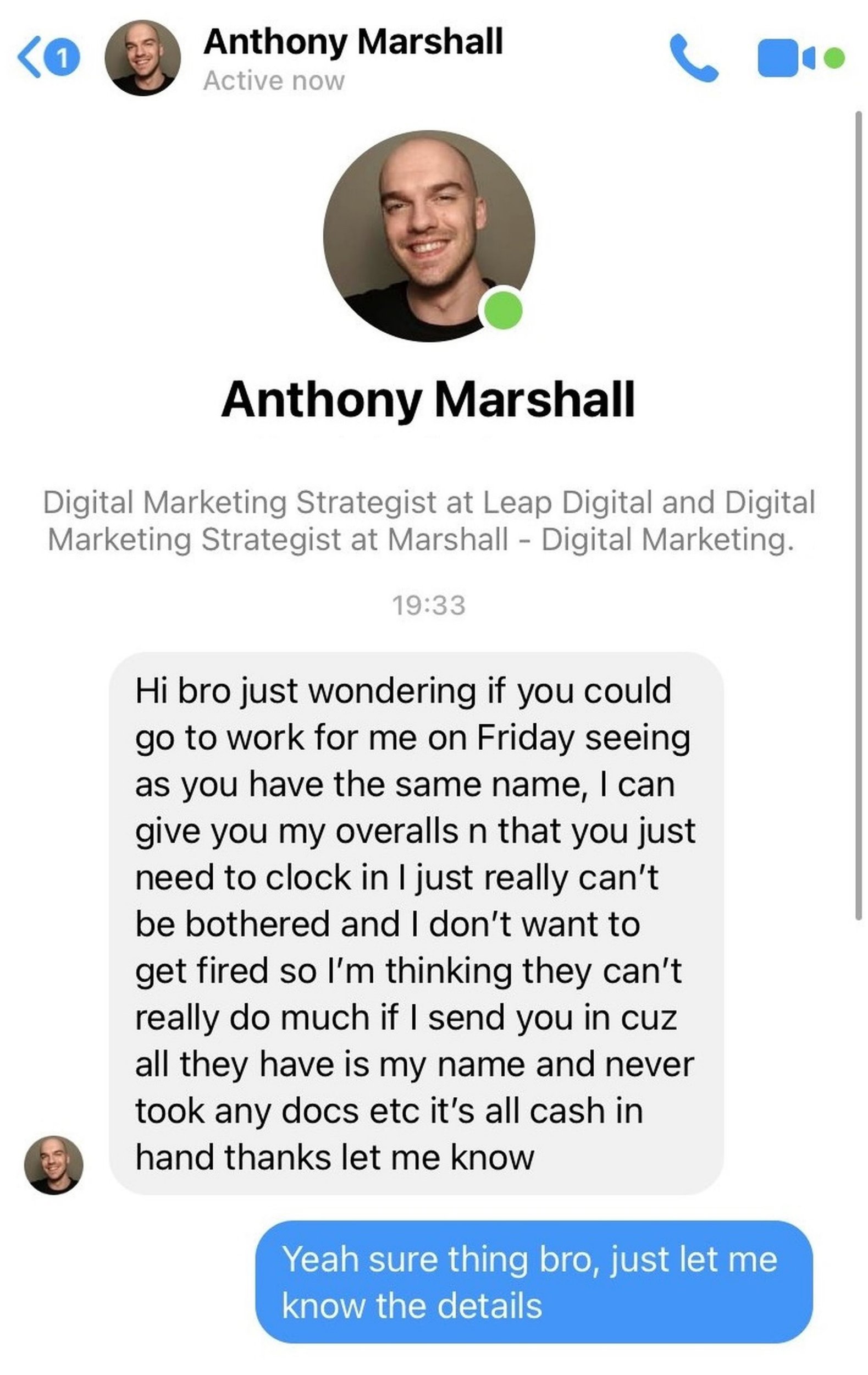 The footage shows ‘the other Anthony’ demonstrating two tests to ensure the baffled student was up to the job, including balancing a shoe on his head and dodging imaginary boxes.

In the messages the reluctant worker detailed how he’d meet his cover after the shift to collect the job’s cash and even admitted he wouldn’t be returning the favour.

University of Chester student Anthony found the approach hilarious, but refused to film his own ‘training’ video or cover the shift.

His tweets have been liked more than 27,000 times and hundreds replied, including 29-year-old Anthony himself who claims he’s disappointed his new pal let him down.

Anthony, from Rhos on Sea, north Wales, said: ‘I saw the message request and I thought my dad had made a Facebook because we have the same name.

‘When I saw it I showed my housemates straight away and thought I’m going to push this as far as I can, then it got to the video and I thought, “I can’t do that”.

‘[The video] was amazing. My housemates are imitating it all the time now. Fair play to him, he really went for it. I don’t know if I could have done it – it was a pretty intense training video.

‘He was a bit selfish. I respect the honesty but he could have at least sorted me out a bit if I did it. He wouldn’t have given me the money and he was all for himself.’

However the cheeky Anthony who made the bizarre request claims he was simply doing it to make himself laugh in his spare time.

The 29-year-old marketing director says he was disappointed his name double didn’t follow through on the video and claims he’d do anything for someone called Anthony Marshall.

Anthony, from North Walsham, Norfolk, said: ‘I’ve been working flat out lately. I had an hour spare and I needed to do something to take my mind off things and have a laugh.

‘I was thinking about how weird it is that there’s people with the same name as you, so I was wondering how many people there are out there.

‘I found there were loads on Facebook so I just sent three of them a message as a joke. That was enough for me, then Anthony replied and he thought I was mental.

‘I wondered if I could take it further and get him to prove if he had the skills to do the job. I quickly started recording and got into character. I was taking it very seriously for a bit.

‘I was hoping he’d send a video back, but he didn’t. He posted it on Twitter then I heard about it from a mate. I find it hilarious, but I’ll never trust an Anthony Marshall again.

‘If another Anthony Marshall messaged me, I’d do anything for them. If they want me to do the video then I’d have done it.’

Get in touch at [email protected]